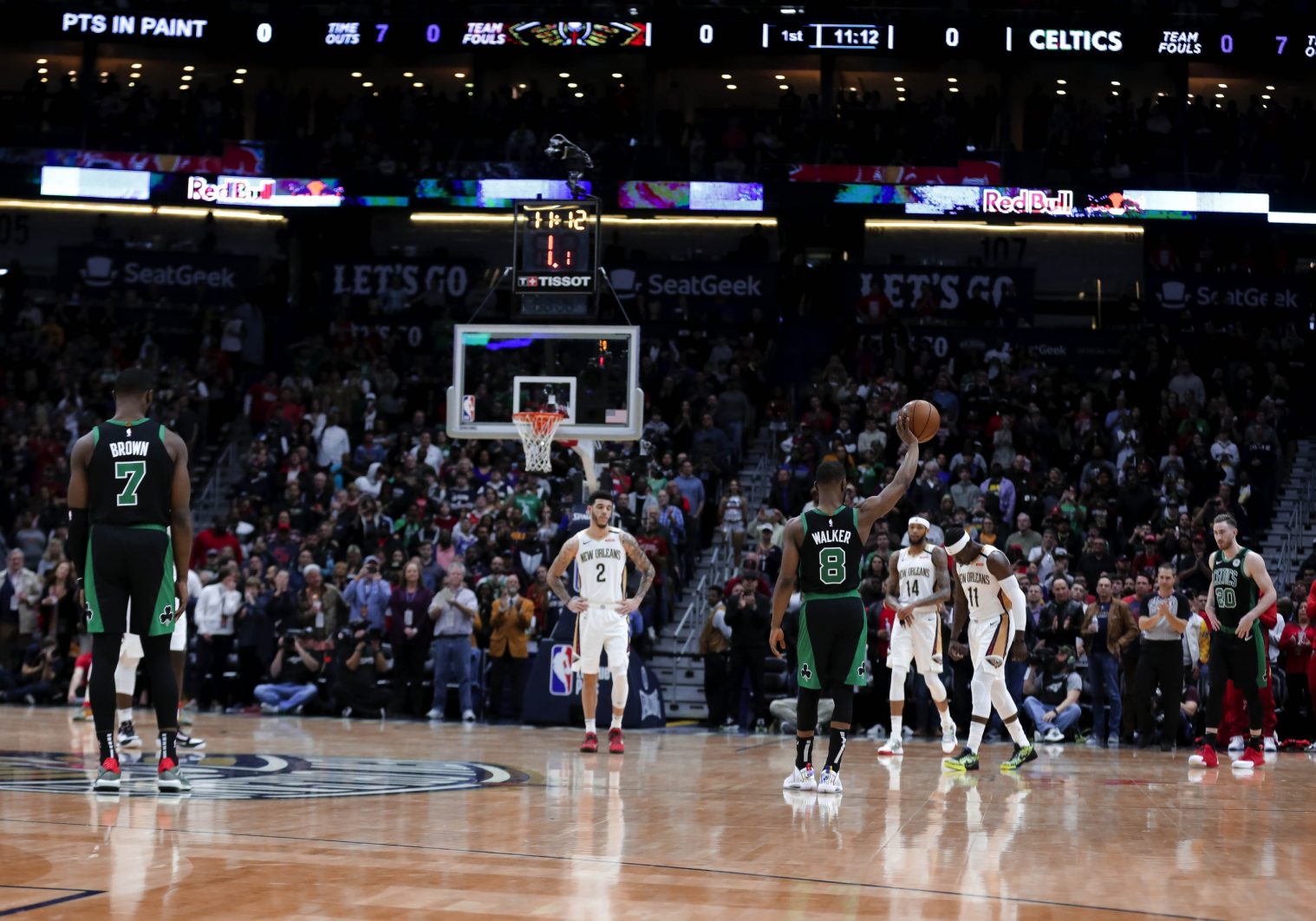 The Celtics’ matchup against the Pelicans unfolded in muted fashion, under the shadow of Kobe Bryant’s untimely death in a helicopter accident, alongside his daughter Gianna and eight other passengers.

The Celtics and Pelicans both let the shot clock run out on their first possessions to pay tribute to Kobe #2⃣4⃣ pic.twitter.com/8WQq5A8Kto

May they rest in peace.

A very difficult part about today is that basketball is supposed to be a sanctuary at times like this, and it's just not right now. When basketball as a way to cope feels wrong, everything is just… confusing.

Not a lot of energy on either side for Celtics or Pelicans. This was how the day's earlier games started as well. Eventually it just became basketball.

Not surprising. As the quarter progressed, both teams showed more energy, albeit mostly on offense alone, with the Celtics shooting much less effectively than the Pelicans. And then:

I didn't see any contact, but he was trying not to put any weight on it as he limped to the locker room https://t.co/tkFq66usrd

Today is hellworld, I guess.

There were intermittent moments of excitement…

But they were hard to enjoy as every Boston player save Daniel Theis seemed unable to buy a shot in the quarter (Kemba Walker went 0-6, Gordon Hayward 2-6). NOLA rode hot shooting from deep by Lonzo Ball and Jrue Holiday—not to mention the brawn of Zion Williamson—into a 16-4 run and a 32-20 lead after 12 minutes.

Injury updates:
Marcus Smart-back on the bench. Team says right ankle sprain, but he is available to return.
Javonte Green told Stevens in the huddle his knee was fine. Trainers only spoke to him briefly.
Kemba Walker was not looked at by trainers. He appears to be fine as well.

Incredible job here by Jaylen to regain control after stumbling and then finish strong through traffic. pic.twitter.com/t16r5VyLkD

Foul or no foul, impressive play by Marcus Smart to go up for a block on Zion Williamson

Defense on Boston’s part amped up a bit in the second frame, as noted above, and Kemba’s shot started falling…but New Orleans’ offense stayed hot.

Kemba has decided to try and score all the points, which is a strategy I agree with.

Unfortunately for the Celtics, the Pelicans are 7/13 from deep

Also, Zion. I feel like I’m going to be typing that a lot in the months and years to come.

Zion Williams jumps like a 300-pound Javonte Green and that’s kind of insane.

The Pelicans simply had more urgency on both ends, and a distinct size advantage over a Celtics squad that didn’t have Tatum and Enes Kanter active (not to mention Timelord, who isn’t due back until mid-February).

Felt like rebounding was going to be an issue coming in. The #Pelicans got destroyed on the boards in their last game. It most certainly is a point of emphasis for them tonight. And the #Celtics are missing Enes Kanter.

Our luck with bounces is absolute shit

But mostly the Pels had high-effort possessions like this, which the Cs really didn’t have:

Four offensive rebounds for the Pelicans on that possession that ended with a Hart three-pointer.

Pelicans close first half on 10-0 run. Ugly half for C's on both ends of the floor.

The Celtics probably could have played better than they did in that half.

I began to wonder if Boston was starting to view this as a scheduled loss—or perhaps fait accompli is a more accurate phrase in context—before the second half even came to a close (with a 60-42 lead for New Orleans). It would be somewhat understandable, if decidedly less than fun to watch.

This about sums up the first half for the Celtics: Kemba crosses himself up, Smart airballs a 3.

Pelicans up 20 at half. pic.twitter.com/yrXSPluEVE

Call me crazy, but the Celtics do not look like a team very interested in playing basketball right now

Aside from the deficit and the undeniable mistakes/listlessness that engendered it, two questionable calls in quick succession didn’t help matters:

Back to back tough calls against Marcus Smart. He's got 4 fouls now and is working his way up to a technical foul.

The first real surge the Celtics had in the second half came sometime around the 9:00 mark: Jaylen Brown muscled out some tough buckets, Kemba notably killed a major Pelicans fastbreak play to ultimately facilitate a Brown triple and Hayward had a superb running dunk…which still had them down 18.

NOLA just kept hitting shots, many of them from three-point land. The deficit stayed in the 15-20 range throughout most of the quarter, in part because Boston got into the penalty well before Q3 was even half over.

Celtics are shooting 67 percent in this quarter but the early free-throw penalty for New Orleans has slowed their gradual comeback a bit.

In the frame’s final minutes the Celtics began to actively threaten the Pelicans’ lead. Walker (who would end the game with a 35-5-4-2-1 line ) was a big reason why, but so was careful planning and execution:

By having Kemba set the back screen on Semi, who Josh Hart never imagined would be the cutter. Hayes doesn't drop down because he sees Poirier setting up a down screen for Kemba to flare to the elbow. Stevens is one of the best at designing these simple yet confusing quick ATOs. pic.twitter.com/dXWYDcyP69

Really smart move by Kemba to step up on Holiday with 2 on the shot clock to force him to either shoot from 30 or drive. Worked just as he hoped as Holiday got off the shot just after the shot clock expired. I'd prefer an open 18 footer under duress than a rhythm contested 3.

Kemba Walker scores 16 of the #Celtics 39 points in the 3rd quarter and we’ve got a game in New Orleans!! Tune in to @Nbcsboston now for the final frame and get one last look at Zion for tonight.

Hayward took the lead entering the fourth with consecutive layups:

Things were starting to look a little better for the Celtics, but they still couldn’t get enough stops to narrow or surpass the Pelicans lead in the final frame’s first half…and New Orleans also wouldn’t stop making shots. (45% from deep.)

3s are killing the Celtics #analysis

So was the gigantic goddamn force of nature known as Zion, and the complete lack of second-unit scoring. (Walker and Hayward had big numbers, but beyond those, Jaylen’s 20 points and Theis’s 15-9-1-02 line, everyone else was in the low single digits.) Despite the extended bursts of good basketball in the second half, the Celtics’ early troubles put them in too big a hole for them to escape.