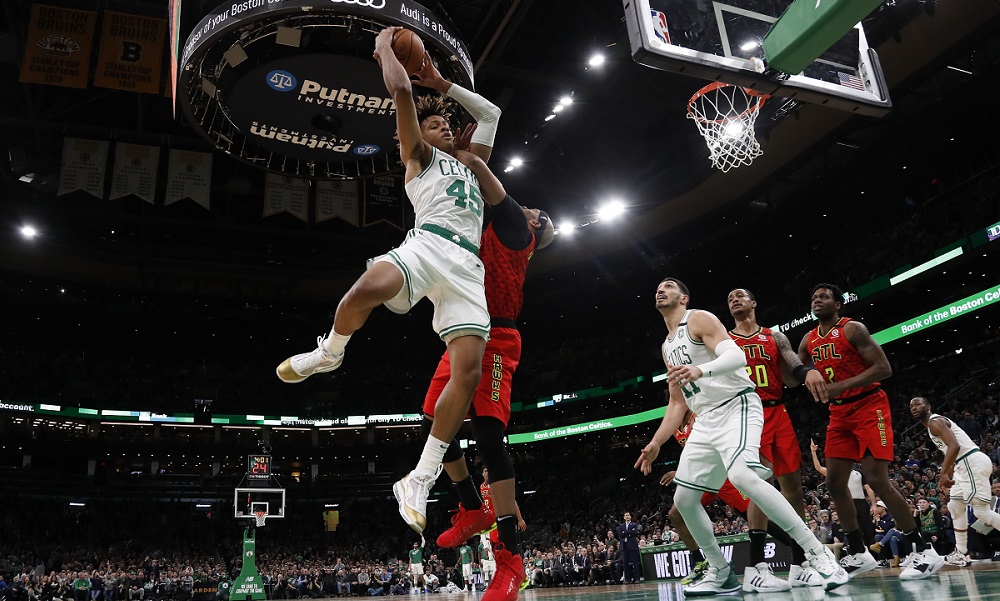 ROMEO LANGFORD: The more we see him play, the clearer it becomes he’s more than capable of helping the Celtics when he gets an opportunity to play.

And he’s doing the little things at both ends of the floor.

During one third-quarter sequence, he contested a shot at the rim and soon sprinted back towards offense where he was greeted with a pass in transition that led to a pair of free throws.

By no means is he ready to be a full-time starter, but it’s reassuring for the Celtics to know that he can deliver when called upon as he finished with a career-high 16 points and five rebounds which included a clutch 3-pointer in the fourth that pushed Boston’s lead to 104-96 with less than three minutes to play.

The shooting guard scored 25 points on the night for Atlanta in a 112-107 Celtics win at the Garden but he was not efficient in doing so, largely thanks to Langford. Huerter was just 8-of-22 from the field and had key misses late thanks to some strong contests by the 19-year-old Celtics rookie. Langford got as much playing time on the evening with Gordon Hayward and Jaylen Brown sidelined as he did during all of January, earning a vote of confidence from Stevens on the defensive end with crunch time minutes during his second straight game.

Romeo was a great trade deadline pickup for the #Celtics

That’s a solid one-liner and it’s also basically true. For most of the season, the rookie was injured, assigned to Maine, or simply had sat on the Boston bench all 48 minutes. On Wednesday, with the Celtics once again shorthanded from injuries, that changed dramatically.

Versus Orlando, Romeo played 28 minutes, scored 6 points on 3-of-4 shooting, and looked very comfortable with NBA competition. Then last night was another level, not just the 16 points (tied with Enes Kanter for second highest Celtic), 5-of-11 shooting, 2-of-5 on threes, and 5 rebounds. The young man also played active defense, with a steal and 3 blocks.

Langford with the REJECTION pic.twitter.com/ChsNykuVv7

In the final 2:31 of the fourth, Romeo drained a corner three, threw down a dunk off Marcus Smart’s alley oop, and made a pair of crucial free throws to ice the game.

Tommy Heinsohn has always said the first hurdle for a rookie is to believe he belongs in the NBA. Last night Langford sure looked like he believes. He was smooth as silk, didn’t appear at all intimidated, and in fact was named winner of the game’s Tommy Award.

If Romeo hadn’t received that honor, surely Jayson Tatum would have. Tatum was again The Man as he had 32 points (his second straight game over 30) and canned a career-high 7 triples in a dozen attempts. He seems to have a new breakthrough every game.

All this youth and talent. Now they just have to remain healthy.

Related – MassLive: Romeo Langford steps up with bigger responsibility: ’He’s been in the gym and you can see it’  |  Globe: Celtics youngsters carving out roles amid team’s injury-plagued stretch

On Page 2: Buyout market might not be a buyer’s market

In an interview Friday on 98.5 The Sports Hub’s “Toucher & Rich,” Celtics president of basketball operations Danny Ainge confirmed the team will at least explore its options on the buyout market.

“We’re going to take a look at all of them,” Ainge said. “We have a list of players that we think have a potential to be bought out, but we have no information on whether they will or they won’t. So, we’re waiting on that.”

Ainge wouldn’t list any specific names but responded affirmatively when asked if there are “one or two” players the team is keeping an eye on.

Tristan Thompson: It’s hard to imagine that the Cavaliers didn’t move Thompson now that Andre Drummond, another paint-clogging big man, is on board.

Acquiring him via buyout won’t be easy, especially when you consider that there will be a number of other teams that would likely offer him a better chance at playing time, which at this point in Thompson’s career will likely take precedence over being part of a winning organization. Adding Thompson would give the Celtics another double-double player akin to Enes Kanter who is far more polished a scorer than Thompson. However, Thompson is the better defender, which makes for a smoother transition for him if he were to become a Celtic.

After not making any trades, the rallying cry is “let’s explore our options on the buyout market.” Not exactly catchy. I was all in favor of going the buyout route, even though it would mean cutting a current player. But the list of names is underwhelming.

Playoff veteran Thompson would be a strong addition, and Evan Turner and Isaiah Thomas would be welcomed for sentimental reasons (and IT can still hit those threes). But dudes like Dion Waiters or Wayne Ellington? No thank you. And one of the more viable candidates appears to be off the market already.

Just caught up with Kemba in the hallway and he said he genuinely had spent a month trying to recruit Marvin Williams to Boston.

The current Celtics were more than fine with keeping the status quo.

“It says that he has great confidence in us,” Walker said of Danny Ainge’s decision to stand pat. “Yeah, that’s really all it is to me. I feel like he has confidence in the group. He knows how well we get along. I think trades can sometimes mess up chemistry sometimes. I don’t think he wanted to mess that up. We got a group that, I mean, we get along maybe a little bit too well. We got a good group with some great guys that are really fun to be around.”

The buyout market works sometimes, the best examples for Boston being PJ Brown and Sam Cassell in 2008. Most of the time, though, they’ve gotten a Troy Murphy or a Greg Monroe – players who sounded better than they turned out to be.

Also can’t forget that Robert Williams is expected back from his hip injury in March. His return could be thought of like getting a buyout player, couldn’t it? Anyway, with a squad of happy and productive players, plus slim pickings out there, the existing Celtics roster is probably what Brad Stevens will have for the rest of this season.

Related – NBC Sports Boston: How a healthy Robert Williams raises the Celtics’ ceiling  |  The Athletic: Assessing the NBA buyout market: Is there help out there for the Celtics?  |  MassLive: Boston Celtics believe in themselves post-trade deadline: ‘We’ve got everything we need to just win a championship’

Half-man/Half-amazing Vince Carter played his final game in Boston, as he’s soon to close out his brilliant NBA career. The Celtics paid tribute before the game, and the fans cheered Vince throughout the night as he scored 10 points in 24 minutes.

Thank you @mrvincecarter15 for your impact on the game. pic.twitter.com/bl3JgOFImr

Globe: 10 observations from the Celtics’ victory over the Hawks