Rapid Recap: Celtics get lost in the sauce, fall to Rockets 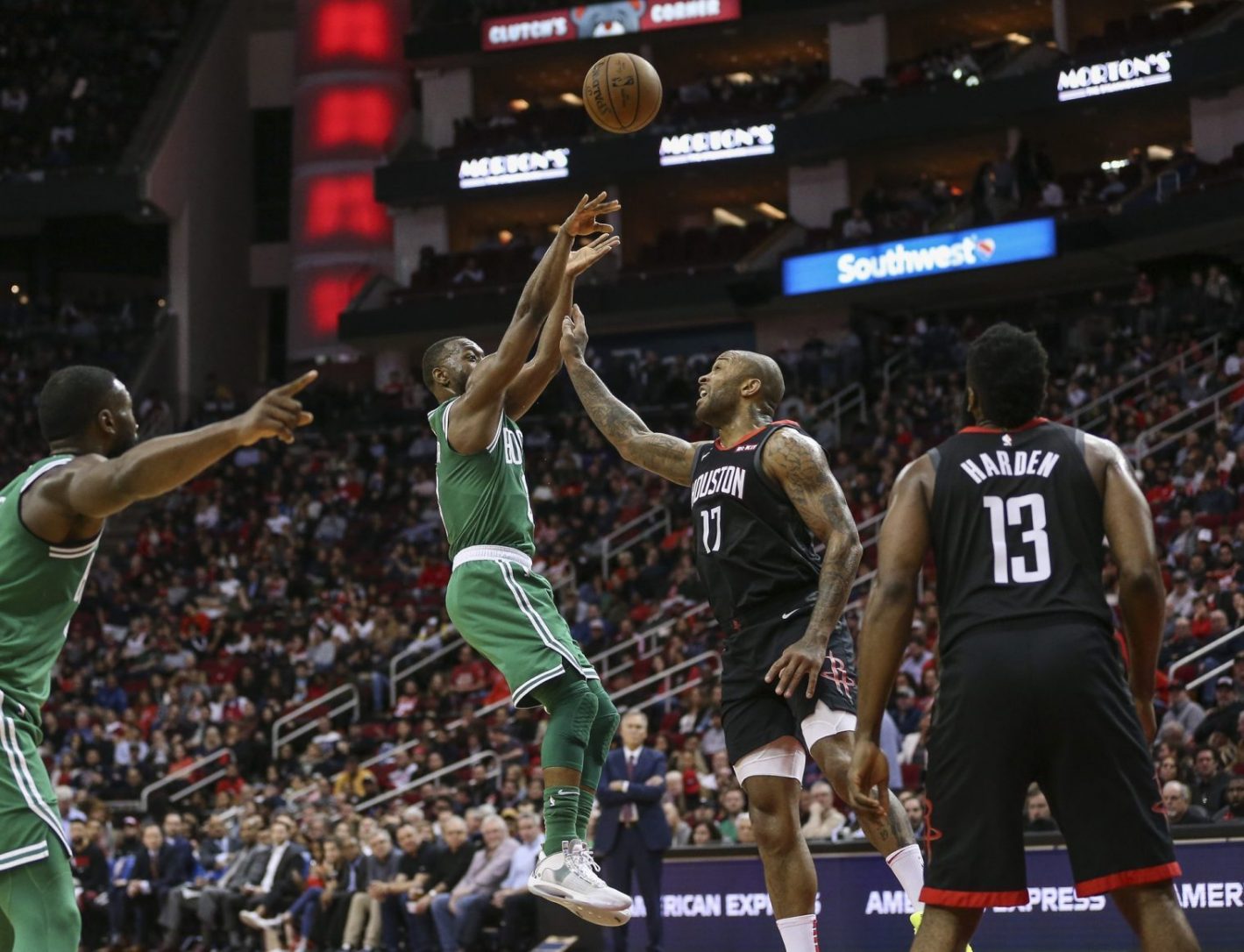 Rapid Recap: Celtics get lost in the sauce, fall to Rockets

It wasn’t unreasonable to think the Celtics could add another W to their streak tonight, even against an always-tough Rockets squad. But the offense just wasn’t anywhere close to what any team needs to beat Houston, even though the Boston defense helped keep things fairly close (until the contest’s end, when it got blown open and ended up being 116-105 Rockets). In a lot of ways they looked decidedly ready for the All-Star break.

Gordon Hayward and Jaylen Brown (20 on 57% shooting and 19 on 58%) were solid while Jayson Tatum and Kemba Walker were clunky with 15 and 14 on sub-40% numbers. It wasn’t enough to stop the expected James Harden onslaught (42 points), and arguably Russell Westbrook was even more effective with his 36-10-5.

While Boston set the tone early with well-executed plays that ended in clear runs to the rim and triples, it didn’t take long for Harden to start cooking.

Indeed. With these teams functioning somewhat as each other’s doppelgangers (relatively small-ball lineups, frequent switching, high-octane offense under usual conditions), it was little surprise they had an attritional, evenly matched game going halfway through Q1 (14-13 Celtics).

*grant is one of our best small ball defenders and now spot up shooters*
Brad: I’m gonna play Enes instead of Grant

It got clunky for Boston right as Enes Kanter came in. Was it his fault they didn’t score for almost four minutes? No. The Cs played into the Rockets’ hand by trying to beat the latter at their own ISO game:

But Houston is not the right small-ball team to deploy Kanter early against. They didn’t need their nominal center Robert Covington (I can’t believe I just typed that) to defuse Enes’s offensive possessions when guys like Harden had plenty of length to do it. H-Town shooters took advantage of Boston’s mini-slump to gain a small lead (23-19), which they held until the quarter buzzer.

Theis gets to the line with 0.7 seconds left, so it's not like they went the whole quarter without getting a call.

A small reprieve from The War on Theis! And he hit both FTs.

Block from Smart followed by the Tatum and-1: pic.twitter.com/Z6FllYihoO

Safe to say the Cs started Q2 determined not to repeat the previous quarter’s mistakes. They attacked with greater intensity and worked hard to neutralize Houston’s runs to the cup (sometimes too hard, as when Theis and Tatum combined to obliterate a Danuel House drive).

It can't be much simpler than this for the Celtics…. they started settling for J's late in the 1st & they gave up a big run. They got back to attacking the basket and they took back the lead.

Celtics are back to playing their pseudo zone. Basically Theis is zoning, while the other 4 switch around him. Theis guards whoever is closest to the basket. It's keeping him out of PnR and giving Boston a rim protector/rebounder on the backline.

Good breakdown of the Cs defensive strategy by our CelticsBlog colleague up there.

Two steals for Wanamaker already, this last one right from Westbrook in the post, and the first one after digging down to help.

Love his effort and strength.

Stuff like this also helped. On the other hand, Westbrook was incredibly good at getting to the line, both legitimately and for BS reasons, as in the following:

This hand-eye and body coordination – against Russell Westbrook in transition, no less – is absurd. This should've been a jump ball. pic.twitter.com/oc53iod3Iq

In fairness, Westbrook’s remained a dominant driver as his jumper has fallen into obsolescence, and he earned a fair number of his points honestly. And regardless, it would ultimately be good defense that headed off Houston’s mid-frame run:

Things got drawn out and ugly in the second half for both sides, albeit considerably more so for Boston to start Q3. Houston had just enough wiliness to retake the lead—slightly at first, then by double digits as Harden went on a major run mostly by himself (not a big surprise if you’ve watched literally any Rockets games this season).

Harden's up to 17 points in the third quarter, and headed to the line for more.

AND DESPITE THAT, Houston couldn’t take charge quite the way they would’ve liked, holding a six-point (75-69) lead on Boston. The Cs were still making some good plays:

One of the Celtics's best offensive possessions of the game. Hayward gets some penetration, quickly moves the ball to Wanamaker to attack a defense in rotation, Grant seals pic.twitter.com/TSr2aW8LXJ

And then this weird shit happened:

Double foul on Grant Williams and Robert Covington because each ref refused to back down on their call. Looks like on replay that Williams slid his torso into the path just too late, so it should be a blocking foul upon review.

Which D'Antoni is now challenging

We're really creeping into weird game territory. Between that halfcourt shot thing and this… we're one bizarre play away from an oral history piece on this game in 5 years

Well…OK then. Hopefully there will be more info/perspective on that later for the Rational Thoughts piece. In any event, the Rockets held their mud enough to carry a 78-71 lead into the final frame of the game.

Celtics in a zone out of the timeout. Covington gets a wide open 3 but misses.

It’d become evident to Brad Stevens and the Celtics that they had little chance of winning a shootout against the Rockets, so they put everything they could into defense. But they were still giving up too much at the rim, and on the offensive end, Tatum’s multi-game hot streak was coming to an end at the worst possible time. And yet……

Celtics should really look to go at Harden here. He's on a bad leg and has 5 fouls.

Sometimes you have to be lucky rather than good, as I’ve said more than a few times. Harden’s foul trouble meant he couldn’t drive as hard as he’d like (superstar or no, the chance of drawing an offensive foul when you’ve already got 5 is still too high to risk) and the Cs went with their most spry lineup of Walker, Tatum, Brown, Hayward and SMARF.

I’ve been waiting for this. Our best 5 against their best 5

It hit the point for the Celtics where they needed to get stops the rest of the game. Had a defensive breakdown that led to a layup for Westbrook. Then Brown rolled his ankle.

Then a turnover on an ATO. Game is slipping away from the Celtics.