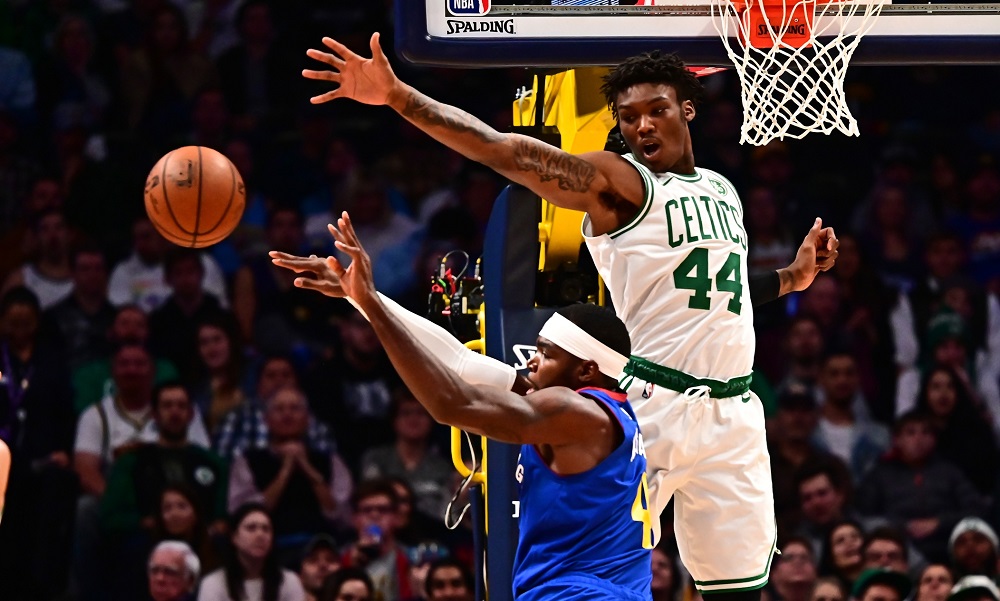 #NEBHInjuryReport Rob Williams has been cleared to play. Brad Stevens says his minutes will be “very limited” the first couple of games.

Kemba Walker (knee) is unlikely to play tomorrow vs. Houston.

A return Saturday gives Williams seven weeks to ramp back up before the playoffs arrive. He played sparingly a year ago (13 minutes in three appearances) but is at least familiar with playoff intensity, unlike the rookies at the end of Boston’s roster.

Williams isn’t going to radically alter the Celtics’ ceiling but he can help and maybe more than any buyout candidate might have. How appropriate, too, that a man nicknamed Time Lord is making his return on Leap Day.

Expectations should be low, but Williams can still be very impactful in a small role. There’s been glimpses of his potential already this season, like a loud performance in San Antonio in which he registered 11 points on perfect 5-of-5 shooting while adding seven rebounds and six blocks in 22 minutes during a lopsided Boston win.

“He had a little extra bounce in his step today,” Stevens said. “You can tell, he’s been antsy to go for a while now, so we’re happy that he’s going to be able to be back.”

Kudos to Chris Forsberg for suggesting our headline today. Yes, the Leaping Lord is back with fortuitous timing on this February 29, and now we just need Kemba Walker healthy to complete the roster.

It looks like Danny Ainge won’t add anyone through the buyout market, so thinking of Robert as a buyout is a take that actually makes sense. In his absence, the Celtics have become accustomed to playing without him. Daniel Theis has blossomed; Enes Kanter has been inconsistent, but probably (maybe) more up than down; and Grant Williams has become an effective (although undersized) contributor in the middle.

Robert will expand the big man rotation as a taller, more springy shot-blocker who can also roll to the rim. His defensive skills will be an asset against teams that would pick on the slow-footed Kanter. His six available fouls will be more ammunition to fight back against the referees’ War on Theis.

It’s obvious that these Celtics can play with any team in the NBA. They rank 5th in offensive rating, 4th in defensive rating, and 3rd in net rating. A win tonight would put them in second place in the East. If they get and hold that second seed, they’d have a tremendous opportunity to reach at least the Eastern finals, and then a realistic shot at the NBA Finals. The one caveat is they can’t afford more injuries.

So put on your lucky Celtics T-shirt, kneel down in front of your framed Red Auerbach photo (you have one, right?), and pray to the hoop gods that everyone remains healthy for the remainder of the season.

Boston Sports Journal: What players could be bought out before March 1st eligibility deadline?

Boston.com: How does the Celtics’ starting five compare to the NBA’s best?

On Page 2: Mind-boggling stat of the day

Yesterday I looked at the best at catch-and-shoot 3's. Today, here are the best off-the-dribble 3P% shooters (100+ attempts):

Smart is shooting a somewhat staggering 42.2 percent from three off the dribble. As noted by Twitter user @StatCenter, he and J.J. Redick lead the NBA in 3-point percentage off the bounce (with at least 100 attempts). Filter those totals to three dribbles or more (on at least 45 attempts), Smart’s number rises to 44 percent, trailing only Joe Ingles league-wide.

Not bad for a guy who, in 2017, had an article written about him titled “Marcus Smart is having the worst 3-point shooting season in NBA history.”

MassLive: Boston Celtics’ Marcus Smart is one of the NBA’s best 3-point shooters off the dribble: ‘It’s something I’ve always been able to do’

Is there anyone out there who ever expected to see Marcus Smart matching J.J. Redick in any sort of three-point shooting statistic? Anyone?

Smart’s shooting from the arc has always been of the “no, no, no…yes!” variety. Some nights he struggles terribly from downtown (he’s had games this season of 1-of-11, 1-of-8 and 1-of-7 twice), but he’s also capable of an historic 11-of-22 effort. Most of all, though, he seems to usually make them in the clutch.

In Boston’s last game at Utah, Smart hit three consecutive triples in the fourth quarter that pushed the Celtics’ lead from six points to 11. Two of those came off the dribble. The Jazz never recovered.

Bottom line: from now on, when Marcus dribbles into a three-point launch, you’ll know there’s a damn good chance it will end with “yes!”

Notice anything different about yesterday? The Celtics did not play a game.

As Rich Jensen mentioned in yesterday’s Dump, between January 3 and February 26, the Cs had no more than one day off between games (except for All-Star break, obviously). They also had four back-to-back situations while playing 27 times, winning 18. Since ending their western road trip on Wednesday in Utah, they’ve had the past two days off.

Starting tonight with the Rockets, Boston will play 24 games over 47 days. They have four more back-to-backs and four breaks of two consecutive days off. They’re at home for 13 games and, of the 11 road games, the farthest trip is to Miami.

Just 10 games are against teams with W-L records currently above .500. Teams the Celtics play twice each are Brooklyn, Indiana, Milwaukee, Washington, Chicago, Miami and Orlando.