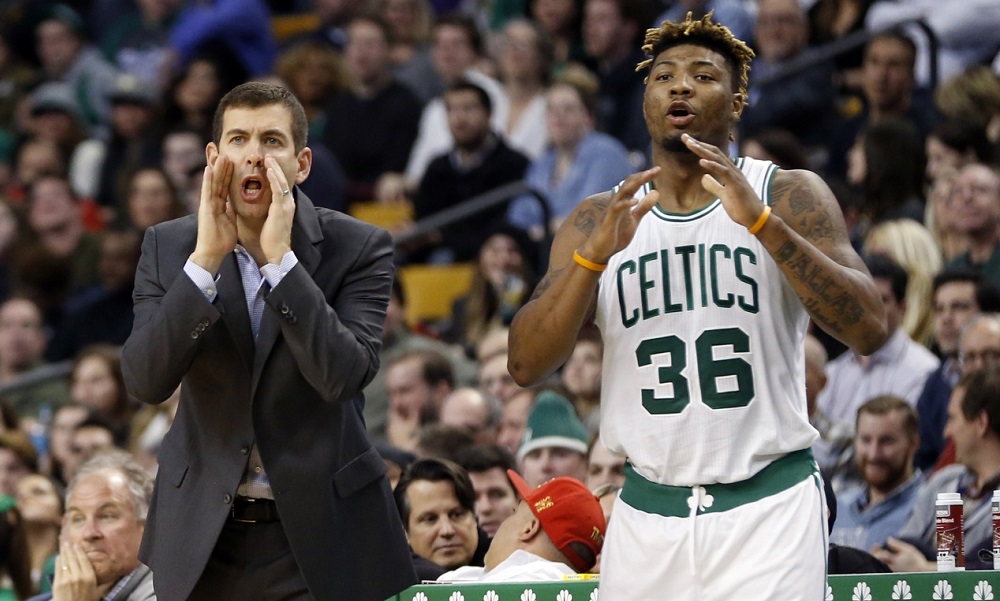 “Joking as always,” Stevens said. “We had a Zoom conference with the team, told the team we were going to give them their own space to hang out and have fun. And he told us to get off. So he’s great.” […]

Stevens said he was proud of Smart for taking on the responsibility of helping keep the public informed.

“I’m proud of how he kind of took the initiative to tell people that he had it and that he felt good and that he got online and just continued to ask people to practice social distancing and self-isolation right now,” Stevens said. “It’s a really unique, unsettling time for everyone.”

Let’s all continue to do our part & stay home. I’m feeling 👍🏿💯 and looking 🔥 at home! #HallwayFits @PUMAHoops pic.twitter.com/qVgrVNopQ1

This is great news, obviously. We’re also happy to hear that the Utah Jazz players are cleared of the coronavirus; Doris Burke was diagnosed with COVID-19 but is now symptom-free; the Clippers owner has donated $25 million (probably what the multi-billionaire scrounged from his sofa cushions) to fight the virus; and old friend Jae Crowder has pledged financial help to employees of a Boston company in which he’s an investor.

Brad reported on Marcus during a conference call with media on Friday. He also spoke about how he himself is handling the crisis.

“My thoughts are with everybody who’s really facing this thing. You feel so bad,” said Stevens. “I was just putting together a PowerPoint today to show our kids today where this is nationally, where this is locally in the New England region, and all the ways people are helping and doing their part as we’re kind of sitting in our own little bubble being self-quarantined and isolated.”

He said the past two weeks, he has only stepped into his car to move it to a new parking spot. He goes for walks around his Wellesley neighborhood, and he and his wife Tracy mostly watch coronavirus news coverage after their two young children have gone to bed. But they are also not shielding them from the grim reality. On Friday morning, Stevens said he was preparing a PowerPoint presentation to show his children real examples of how this deadly virus is impacting the world.

I’m picturing Brad as a 21st Century Ward Cleaver, using PowerPoint to instruct Wally and the Beaver on how to be polite young men in middle America. We sometimes call the coach “Dad Brad” because that’s the image he projects, and our current world situation is really testing Brad’s dad powers. Sounds like he’s meeting the challenge.

He’s also still coaching up his players, like a parent mentoring his kid’s youth-league team.

“As a coaching staff, we’ve talked a lot about, we’re keeping a pulse on all of our team and all of our individuals,” Stevens said. “We’re on Zoom teleconferences a couple of times a week so we can all see each other’s faces and talk about non-basketball things… everybody’s checking in every day, either individually and then a couple times – two to three times a week.”

It’s now been 18 days since the Celtics played, and they’ve missed nine scheduled games. There’s no end in sight, but take note of a new agreement between Major League Baseball and the MLB Players Association.

* The caveat agreed to by the players and league is that they will consider playing games at neutral sites instead of home ballparks — and will consider the feasibility of playing in empty stadiums and just how proper a solution it may be for both sides and especially fans.

Perhaps this development will influence NBA leaders to set some targets, too. It’s a start.

On Page 2: Waiting for Gordo

Hayward has a sizable player option for next season, worth $34 million, the final year on the free-agent deal he signed with Boston in 2017. According to his contract, he has until June 29 to inform the Celtics whether he is opting in for that. Pushing back player and team contract option deadlines is one of the items that is expected to be worked out between the league and the union whenever plans to restart the season come into focus. […]

Around the league, front-office executives say they expect that Hayward will opt-in.

“It’s too much money to pass up,” one general manager told Heavy.com. “He could get a longer deal if that is what he really wants. But I don’t think the Celtics want to give it to him, they have a lot of young guys to pay and the starting (salary) number on whatever the contract is will not be close to $34 million. He can opt in this year and then take a big contract next year. When you look at what he has done since his injury, he has only gotten better. He could get better next year and be ready for the summer of 2021.”

That’s when a lot more teams will have cap space, including potential contenders like Toronto, Miami and the Lakers. Those teams are expected to vie for Bucks forward Giannis Antetokounmpo. Hayward could position himself as a quality consolation prize.

heavy.com: The $34 Million Question: What Will Celtics’ Gordon Hayward Do?

Sounds like a no-brainer for Hayward, right? Well, almost everyone expected Al Horford to stick around, too, and we know how that went.

Leaving aside all the financial aspects, it would be a huge disappointment and a blow to the team’s prospects if Hayward walks away now. After a devastating first year, his second-year performance was unsurprisingly erratic. He’s finally been successful this year – but the season is conceivably already over after he played just 45 games.

My gut feeling is that Hayward will stay. But the fact is, if he opts out and the Cs lose a chance to have him at full health in a contract year, his time in Boston will have been a complete failure. If he wants to change that narrative, he’ll need to stay and deliver an all-star season. It’s that simple.

And, finally… Tune in

Having serious basketball withdrawals right now? We are too…

Grab some 🍿 and get your #Celtics basketball fix on @NBCSBoston!

Having seen all these games when they happened, my recommendation for the One Game Not to Miss is Game 7 of the 1981 Eastern Conference Finals, airing on Monday, April 13. In a battle between loaded squads – both won 62 regular-season games – the Celtics completed a comeback from a 3-1 series deficit to eliminate the Sixers. Trust me, there’s never been a more intense and dramatic 48 minutes on the parquet.