Your Morning Dump… Where Gordon Hayward offers a reality check 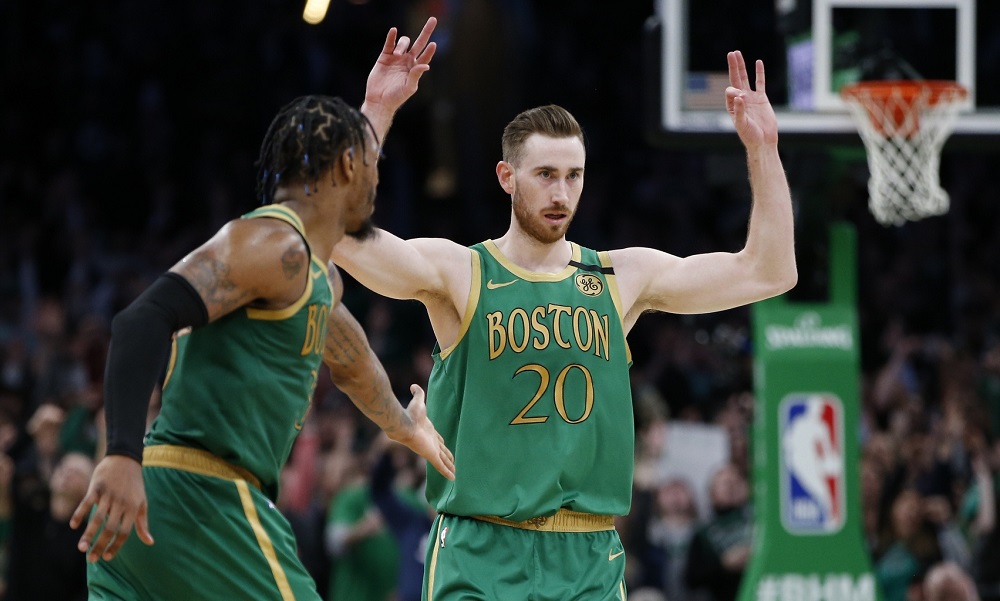 Your Morning Dump… Where Gordon Hayward offers a reality check

The NBA wants to return. The players want to play. Fans want to watch.

Those are things we know. The how and when of it all?

“It’s hard to envision,” says Boston Celtics wing Gordon Hayward, expressing the same feelings most of us have right now.

“I’ve thought about it a little bit, and whatever scenario they come up with will probably be something none of us players have dealt with before,” Hayward said in a Friday conference call with reporters. “Whether it’s with everyone in Vegas or another location, maybe playing with no fans. Playing with no fans would be pretty wild – almost like a scrimmage at training camp.”

MassLive: Gordon Hayward: how NBA returns ‘hard to envision,’ but important ‘not to rush the season back’

In this space last week, I said it didn’t seem likely that the NBA could find a timely method to complete the season. Today, it seems like even more of a long-shot.

The only apparent improvement of our situation is that more testing for the coronavirus is being carried out now than before. With more testing, more cases are identified, so the numbers continue to rise across the U.S.

Sports really can’t happen safely until we see those numbers decline. Listen to an old coach.

As I go to bed ,I’m appalled with talk that we have turned the corner with the coronavirus pandemic . Just saw # ‘s that blew me away /18 thousand dead & over 500 thousand are infected.Ask them if we r out of the woods. We MUST continue doing what the medical ppl tell us to do .

Besides, a Seton Hall University poll revealed that 72% of Americans – and 61% of sports fans – surveyed said they would not attend games until a COVID-19 vaccine is developed.

Players are people, too. They also have concerns.

They had recently taken on the Utah Jazz, which was a problem — Rudy Gobert was the league’s Patient Zero. Every game night, the players jogged into arenas with thousands of fans, hundreds of whom lined the tunnels and held out their hands for high fives. Gobert might have been Patient Zero, but the Celtics had no way of knowing whether they had been exposed as well.

“I think everyone was a little bit scared at that point in time just because of the uncertainty and not knowing exactly what’s going on,” Gordon Hayward said in a conference call on Friday.

Hayward had extra reason to be concerned. Back home, his wife Robyn was pregnant with their fourth child, and no one seemed certain how the virus might affect a pregnancy yet. […]

“…We just try to stay safe, make sure that we’re protecting ourselves, and not putting anybody else at risk. I think if everyone tries to do that individually this thing will be better over the long run.”

So the waiting game continues, something we can expect indefinitely. But at least the Celtics are better off than the Jazz.

I’ve enjoyed this @LOCeltics series on the 1960’s with @MikeDynon joining @RedsArmy_John. A good idea for no basketball time. Last one is up today so check it out if you haven’t already.

NEW PODCAST… @RedsArmy_John & @MikeDynon finish off their look at the 60's, the end of Bill Russell's time in Boston, the one year they didn't win a title, & how the history-making player/coach ended it with maybe the most satisfying titles of them all https://t.co/7ZtEYsndti

If there’s one thing I can do better than anyone else here at your favorite Celtics fan blog, it’s talk about franchise history. There’s a good reason: I’ve seen most of it first-hand.

So I was all in when Red’s Army co-founder John Karalis asked me to take part in a Celtics history series for his top-rated podcast. In the past two weeks, we’ve covered the 1950s and 1960s, with the ’70s coming up next week. It’s been a blast, and feedback from listeners has been positive – the pod is their hoops oasis in this basketball desert.

If you’d like to give it a listen, all eight episodes in the series so far can be found at the Locked On Celtics website. The next new installment will appear Tuesday. Also, watch for appearances in other episodes by Red’s Army co-founder Chuck McKenney, who’s been a regular guest on the pod this year.

Speaking of the ’70s, Bob Ryan, the dean of all NBA writers, opined about the quality of the 1970 draft.

The 1970 draft also includes Hall of Fame inductees at Nos. 18 (Calvin Murphy), 19 (Tiny Archibald), 106 (Charlie Scott), and 122 (Dan Issel). There are asterisks attached to Nos. 106 and 122, of course, since we are talking NBA Draft and the reason those two didn’t go higher is that they already had been scooped up by the ABA.

Globe: In 1970, NBA gave us a draft class that was, well, pretty classy

As a Hall of Famer, Cowens will be prominent in our Locked On discussion about the decade, obviously. He had the best career of any 1970 draftee: Rookie of the Year (co-winner), 1973 MVP, eight All-Star Games, three-times All-NBA and All-Defense, and NBA champion in 1974 and 1976. Dave was also a head coach for six seasons with three franchises.

Four of those eight Hall of Famers named above played for the Celtics: Cowens, Tiny (1981 champion), Scott (1976 champion), and Pistol Pete (played the final half-season of his career with Boston, 1980).

MassLive: NBA Draft 2020: In wake of coronavirus shutdown, teams push league to push draft back to August at earliest

NBC Sports Boston: Who are the best power forwards in Celtics history? Ranking the Top 10