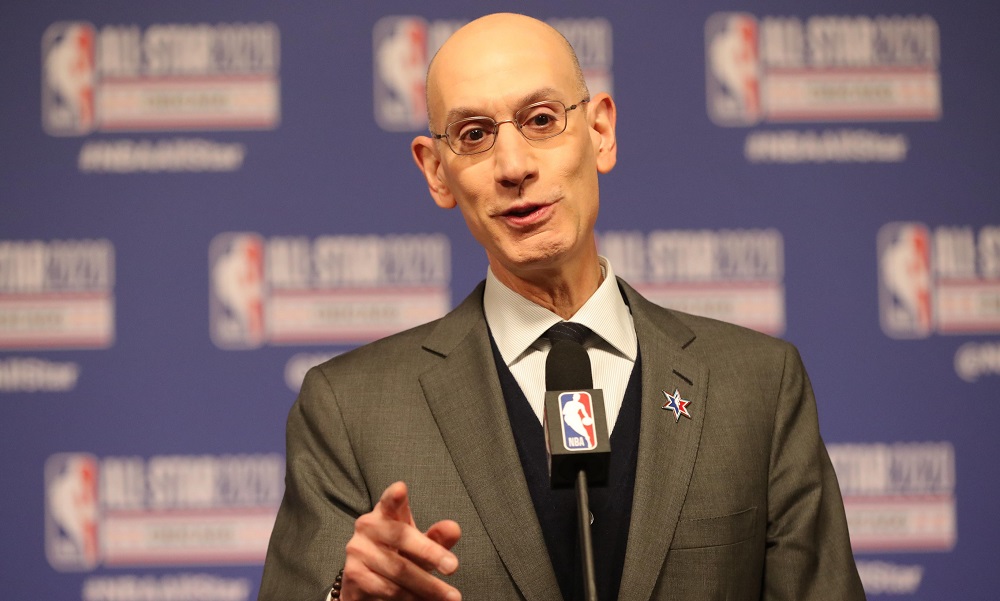 NBA commissioner Adam Silver says Board of Governors are in agreement that safety is paramount: “We are not in any position to make any decisions and it’s unclear when we will be.”

“Everything is on the table,” Silver said when asked if regular season games would be an option. “All rules are off at this point given the situation we find ourselves in, that the country is in. If there is an opportunity to resume play, even if it looks different than what we’ve done historically, we should be modeling it.”

Silver said Friday that there are simply no answers to be had right now because there is still too much uncertainty with the virus. Leading infectious disease expert Dr. David Ho, who advised the league after the Magic Johnson HIV diagnosis, made a presentation at today’s Board of Governors meeting. Silver says there are too many variables at play right now not only to determine when to come back, but also to determine a “drop-dead” date.

“We’re just not ready to set a date yet in terms of how long we could wait before we no longer would be able to continue this season,” Silver said. “I would just say everything is on the table, including potentially delaying the start of next season. Again, we just need more information.”

MassLive: What will an NBA return look like? ‘All rules are off,’ says Adam Silver

“I think we’re looking for the number of new infections to come down,” he said during a media teleconference call following Friday’s league board of governors meeting, which featured Dr. David Ho, a renowned infectious disease expert who originally counseled the NBA on the AIDS epidemic, and Bob Iger, Disney’s executive chairman.

These two perspectives, from the medical and economic sides, produced agreement on a simple guideline.

“To steal a line from Bob, when he was asked by several people about particular timelines, he said from his standpoint it’s about the data and not the date,” said Silver.

The NBA commissioner laid out a partial list – in and of itself voluminous – of the kind of data the league will need before making a return.

“We’re looking for the availability of testing on a large scale,” he said. “We’re looking at the path that we’re on for potentially a vaccine. We’re looking at antivirals. On top of that we’re playing close attention to what the CDC is telling us on a federal level and what these various state rules are that are in place.

“There’s a lot of data that all has to be melded together to help make these decisions,” said Silver. “But that’s part of the uncertainty. I think we’re not even at the point where we can say, ‘if only A, B, and C were met, then there’s a clear path.’ I think there’s still too much uncertainty at this point to say precisely how we move forward.

Herald: Adam Silver says too much data is unknown to predict an NBA return

Today was supposed to be the first day of the 2020 playoffs. As you well know, it’s not. Just one of countless changes in our daily lives due to the coronavirus.

The commissioner’s comments made it clear that the league is being ultra-cautious to avoid all risk to players’ health and safety. That’s a wise approach. In particular, “…it’s about the data and not the date…” sounds like what former point guard Dr. Anthony Fauci regularly attempts to preach at the daily coronavirus task force briefings.

Although Silver’s remarks didn’t resolve any questions, we now have some perspective. It’s simple: With the league keeping its options open, we’re all in limbo, and we should expect to be there indefinitely.

Jayson Tatum took time out from quarantining with Deuce for an interview. When asked who should win the NBA’s regular season awards, Jayson smoked a bunny on the MVP answer (it should be Giannis, whose Bucks have the best winning percentage at .815). But JT made up for that by choosing Marcus Smart for Defensive Player of the Year.

Jayson also revealed he’s ordered a hoop for his driveway. This is important because he hasn’t picked up a basketball since the Celtics’ last game on March 10!

The Celtics star also gives out other NBA awards and talks about the G League vs. the NCAA during an interview with @TaylorRooks pic.twitter.com/UufwAZyzSx

Related – MassLive: Celtics’ Jayson Tatum says NCAA should let players profit off their likeness ’Kids should be paid. Millions are made off them in jersey sales and March Madness’

Grab some 🍿 and stay tuned for more #ClassicCeltics games on @NBCSBoston!

If we can’t watch current games, at least we have the best of the past. These are scheduled in groups: first is a doubleheader of epic playoff comebacks; then three nights of Larry Bird at his peak; a twin bill of  famous playoff steals; and a trio of the Big Three’s best in the 2007-08 season.

The Athletic: How a theoretical salary cap drop changes the 2020 offseason