Rapid Recap: Celtics fight off Sixers for the win in Game 1 meat grinder 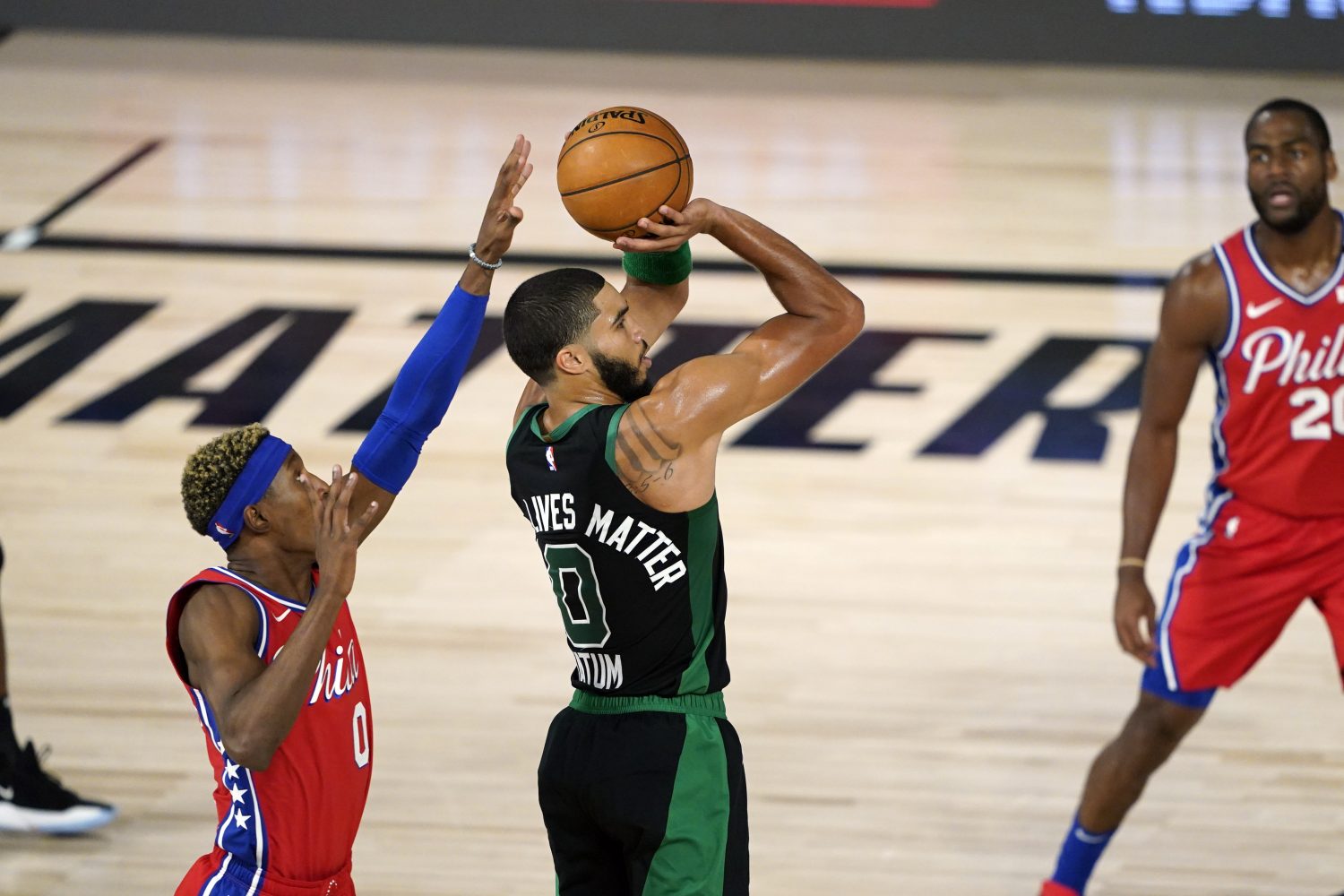 Rapid Recap: Celtics fight off Sixers for the win in Game 1 meat grinder

There was no way this one would be easy for the Celtics. Games against the Sixers never are, even in this case, with Ben Simmons out for the duration and taking a lot of his squad’s offensive potency with him. So we got a grindy, grimy contest that Boston narrowly won, 109-101.

Jayson Tatum was the Cs unquestioned star with a massive 32-13 double-double (plus an assist and 3 blocks), but Jaylen Brown wasn’t far behind at 29 points, 6 boards, 4 assists and 3 steals. It was good they scored so prolifically, because aside from them and Kemba Walker (19-1-5 plus a steal), there wasn’t a ton of offense. Gordon Hayward had a reasonably balanced line of 12-4-3 plus 4 steals, but sprained his right ankle—not that ankle, yet nevertheless, his future in the series is uncertain.

This game started largely as a war between Brown and Joel Embiid on offense, but Kemba Walker arguably had the hottest highlights (including a pretty dish to Daniel Theis for a dunk, not pictured):

and he's off ⛹🏽‍♂️💨 pic.twitter.com/W7CdOvCBzq

Yet as expected, these two squads were immensely closely matched throughout the frame. (And that’s WITH the absence of Simmons; there’s a reason why Celtics fans dreaded this matchup until the Australian point forward’s injury.) This gave us 12 minutes of oft-traded leads, with the Sixers narrowly holding a 26-25 lead when it ended.

Have to feel very good about the shot quality the Celtics conceded. Would like to see them attack advantages better on offense and generate better looks through sustained team offense, though

Carlin’s analysis there seems right on the money.

Additionally, the Cs were well-equipped to force Sixers turnovers and score off of them, but Philly had a knack for turning bad shots into second-chance points that Boston couldn’t match. This was one of many things that made the game often feel like a war of attrition: Neither squad had an obvious advantage. Embiid is probably the best player in this series, whereas the Celtics are a better overall team but can still be smacked around by Embiid (and Horford, and Harris, and arguably even Matisse Thybulle).

Philly have done a good job of killing Boston’s off-ball movement. Curious how Boston overcome that as the game continues

Around halfway through Q2, Boston’s key weapon materialized in the form of Jayson Tatum:

Jay Smooth to the hoop pic.twitter.com/HDLJAdc7k1

Find something you like as much as Jayson Tatum seems to like attacking the Sixers’ drop coverage.

21 POINTS IN THE FIRST HALF.

Despite Celtics' intense defense, Philly still shot 55%. SMH over some of the makes. But Tatum is making up for that, 21 points, 4 of 5 threes.

Mike, in keeping with his status as the grand sage of Red’s Army, is wise to note that the Cs allowed way too much quality offense from the Sixers despite how hard they were working on defense. Fortunately, Tatum kept his surge going through the early third-quarter minutes to keep Philly at bay.

Jayson Tatum has completely furnished his home of superstardom https://t.co/8QYIpaZVjd

Boston extended their lead over Philly as far as 10 midway through the third, and then got a little cocky, started trying some heat-check shit that didn’t pan out. (Theis, for example, has developed a more than serviceable jumper, but was far too trigger-happy with it on consecutive possessions.) AAAAND then it was tied. And then Philly had the lead.

everytime enes is on the court I get upset

Al Horford starting to come into his own didn’t make things any easier.

Brown, Walker and Tatum went to work immediately to start regaining the lead, and despite some tough Sixers defense and other issues, the Cs re-tied it four minutes in.

jaylen brown will save us https://t.co/0hpbexwoBn

Admittedly, Kanter was helpful in making up for some of his earlier mistakes:

Kanter with 3 dimes in 8 minutes, one assist shy of his playoff career high. https://t.co/NDUZt9uDJE

Some controversy when Horford sorta grab-tackled Brown on a drive and Brown laid it on a bit thick to get a flagrant out of what was probably a common foul…but it benefited the Cs, so *shrug emoji.* This was part of a 9-0 run that gave Boston back the lead.

GRANT saw some action finally in Q4 and extended some Cs possessions with tough rebounding:

The combined strength of Jayson and Jaylen—plus some clutch free throws by Kemba—put this one away for the Cs. But with Hayward injuring his ankle, any definitive prediction for this series would not be wise.

Hopefully it’s just a sprain and he’ll only miss a couple of games.