Your Morning Dump… Where the Celtics are in a familiar position: up 3-0 on Philly 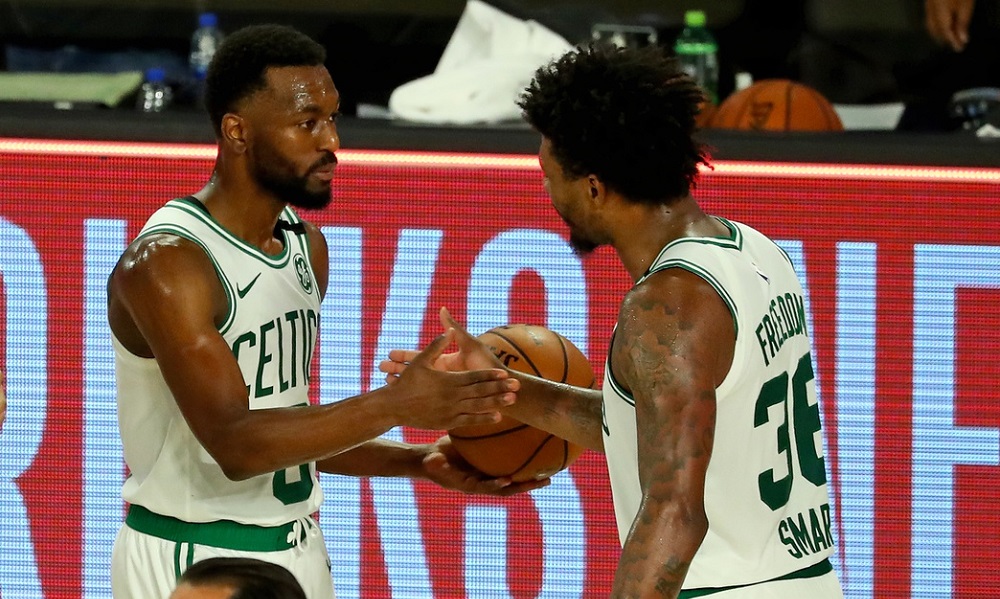 Your Morning Dump… Where the Celtics are in a familiar position: up 3-0 on Philly

We all remember the moment. Two years ago, Game 4, Celtics at Philadelphia, Joel Embiid stirring up shit in a desperate attempt to distract the Cs from their game. Mook Morris, himself an expert shit-stirrer, had the perfect answer: flashing three fingers, then folding them into a zero, to remind the big Sixer that the Celtics controlled the series with a 3-0 lead.

Mook is with the Clippers now, but Joel is once again looking glum, stuck in another 3-0 hole versus the team he can’t seem to beat. Last night, Marcus Smart and Kemba Walker made the big plays down the stretch as the Celtics won, 102-94, taking full control of this first-round playoff series.

Walker kept hitting his mid-range jumpers to help keep the Celtics on top and then Jayson Tatum finally started going about halfway through the quarter. Still, Boston couldn’t pull away, and the Sixers went on an 8-2 run fueled by more second chance points to cut the lead to 1. Philly took a lead with 4:33 left. The Celtics took it back for a short bit but the Sixers regained it on Embiid’s 14th free throw of the night. With less than two minutes to go, a Marcus Smart steal triggered a 10-0 run to end the game.

As the clock ticked toward the final minute, Kemba drained an enormously clutch bucket over Horford.

Walker played well on offense in the first two games in this series, but it was grating on him a bit that he had yet to find his long-range stroke. In Games 1 and 2 he combined to make 14 of 22 2-pointers and 1 for 10 3-pointers. He hit 3 of 8 3-pointers Friday, although his biggest shot came inside the arc, when Horford never had a chance of keeping up with him on the mid-range step-back with 1:05 left.

“Just trying my best to create space, man,” Walker said. “That’s really it. I was able to get some great separation on Al and I hit a great shot.” […]

Walker was engaged at both ends of the floor. One example: Midway through the third quarter he battled with Horford in the paint and worked hard to get a clean strip. He then tip-toed the baseline before grabbing the ball and firing it out of bounds and off of Horford.

“He was the leader tonight,” Tatum said, “He carried us. He was special.”

There was a bit of irony to that basket being made when you consider it was Horford’s departure to Philadelphia that would prove central to Boston having the fiscal flexibility to sign Walker following Kyrie Irving’s departure to Brooklyn.

Walker, who led all Celtics with 24 points, eight rebounds and four assists, is one win away from advancing to the second round of the playoffs for the first time.

This is where Philly fans will remind us they are without Ben Simmons. He’s obviously vital to their fortunes. But the Celtics don’t have Gordon Hayward, so cry me a friggin’ river.

It would help the Sixers if their two big-contract guys could do anything to help Embiid (30 points, 13 rebounds in Game 3), but they haven’t. Tobias Harris did put up 15 and 15 last night, but he can’t make a shot (now 0 of 10 on threes in the series). Horford has done nothing either; he scored only 6 points last night, bringing his series total to an anemic 16 points.

Boston had advantages in points in the paint (44 to 30) and fast-break points (22 to 8). The Celtics bench outplayed Philly’s subs (again), with solid minutes from Grant Williams, Enes Kanter, Brad Wanamaker and Romeo Langford.

Neither Jayson Tatum (15 points, 6 of 19 shooting) nor Jaylen Brown (21 points, 6 of 16) could find the basket most of the game, but they combined for 14 necessary points in the 4th quarter.

The Sixers as a team shot worse.

The Celtics held the Sixers to 29.5 percent from the field, which was a season low for a Celtics opponent.

But Philly stayed in it with 20 offensive rebounds and a 20-9 advantage in 2nd-chance points. (Odd that Rob Williams didn’t play even one minute.) The Sixers also lived at the free throw line (see Page 2 for more). In addition, the Cs hurt themselves by ringing up only 15 assists; they usually win comfortably when they move the ball enough to get 20-25 dimes.

The Celtics could have given this game away. Smart admits the team let down too often defensively and could have played better. But when it came time to make the big plays, it was Smart leading the way.

“When you have a guy like that going hard like he does, man, you have no choice but to raise your level. That’s what he brings out of all of us,” said Kemba Walker, who had perhaps his best defensive night as a Celtic as well. “We know what we’re getting from Smart. We know he’s coming to kill and play extremely hard. When we see him diving on loose balls and guarding big guys and blocking shots and just being Smart, we have no choice. We have no choice but to raise our level to where he is.”

MassLive: Marcus Smart, again, saves Boston Celtics: ’I just can’t see how he’s not in the Defensive Player of the Year consideration.’

Two years ago, the Sixers rode their home crowd to a stay-alive win in Game 4, before being eliminated in Game 5. On the neutral court in Disney World, they will have no such advantage on Sunday. The Celtics are poised to end it, and you have to wonder if the discouraged Philly squad is just ready to get the hell out of the bubble, ASAP.

On Page 2: The Foster Factor

Tough loss for Scott Foster, I mean the Sixers.

Yeah, we complain about the refs. Too much. It starts with Tommy Heinsohn and goes all the way through Celtics Nation. Obviously, we’re not alone. Every fan base thinks the refs are screwing them.

And here’s why. Upon learning Scott Foster would work last night, we feared the worst – and that’s what we got. Foster is widely considered the most difficult, inflexible official in the NBA. With Boston ahead, 2-0, a favorable whistle for Philly would help make the series interesting.

But the Celts played through it, even after losing The-War-on Theis (new first name, who says no?).

They had every reason to break Friday at The Field House in Game 3 of the Eastern Conference first-round playoffs. Their frustration with the officiating reached a peak when Daniel Theis was called for a blocking foul with 3:12 left and the Celtics up by 2.

The 76ers led by 2 with 2:14 left in a game they desperately needed. The Celtics were out of fouls and had nothing to stop Embiid. Until they did stop Embiid. The Celtics held Philadelphia scoreless for the final two-plus minutes while running off 10 straight and knocking out their archrivals in the 15th round of their latest clash.

Globe: Facing a desperate opponent, poised Celtics proved in the end they wanted it more

The Celtics need to stop fouling so much, because if they move on they will likely face the Raptors, a savvy, veteran team with a championship pedigree. The champs are going to get calls, because that’s how the NBA works. And as far as we know, Scott Foster will still be inside the bubble.

Boston owns the Nos. 14, 26, 30 and 47 picks, but the 2020 NBA Draft is anything but normal, much like everything else over the last eight months. The coronavirus pandemic has eliminated in-person workouts, interviews and pro days leading up to Oct. 16, making it all the more difficult for teams to evaluate prospects. With virtual interviews being their only outlet, NBA teams are as limited as ever when it comes to evaluation tools ahead of the draft. In an already-weak class, the uncertainty is through the roof.

Boston.com: The Celtics officially have the No. 14 pick in the 2020 NBA Draft. What now?

The Celtics added four draft picks last year, and now they have four more picks – frankly, none of them extremely valuable. But how much appetite does Danny Ainge have for adding four more? It wouldn’t make much sense.

Although the playoffs are in full swing now, perhaps you’re already looking forward to the draft. Then this article is for you. My vote is for some sort of trade, but we’ll discuss that later. Much later.

MassLive: NBA mock draft 2020: Anthony Edwards to Minnesota Timberwolves, plus how do Boston Celtics use their three picks?