Your Morning Dump... Where tonight's game is the real yardstick 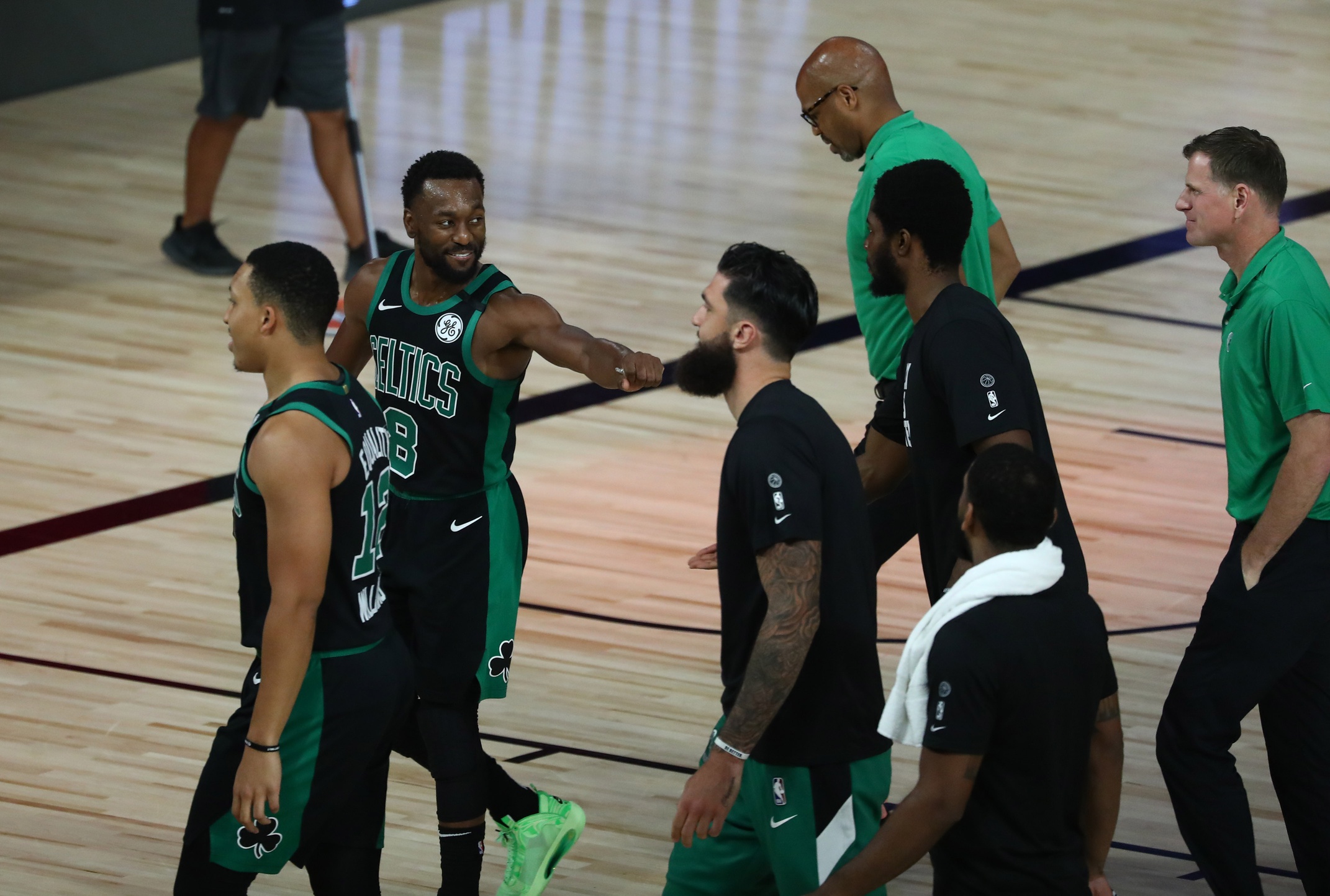 Your Morning Dump... Where tonight's game is the real yardstick

The Boston Celtics are playing like a legitimate NBA championship contender, and oddsmakers are taking notice.

The Celtics earned a convincing Game 1 win over the Toronto Raptors to begin their Eastern Conference semifinals series Sunday afternoon. The victory improved Boston’s playoff record to 5-0, including an average margin of victory of 13 points. The Celtics have now won four of five meetings versus the Raptors this season, and they’re 2-0 against Toronto inside the Orlando bubble.

There are a lot of reasons to like the Celtics in this series against the Raptors and in a potential Eastern Conference finals matchup. Boston’s scoring depth was awesome during the regular season — the only team with three players averaging 20-plus points per game — and it’s been strong in the playoffs, too. Kemba Walker continues to look better and better after load managing his knee during the seeding games. Jayson Tatum is playing like the top-15 player we saw for most of the season, and Jaylen Brown continues to look like an All-Star caliber talent.

Last year’s C’s team had a stretch where they were on a 60 win pace, and it lasted most of the season. From late November to the end of February, they looked better than their overall record or the way we remember them.

Their play tapered off as the season wound down and while they were coasting to the finish line, they assured us that things would be fine once the playoffs started.

And for the first five games, they were. They opened the series against Milwaukee in dominating fashion.

Then proceeded to lose the next four games, barely putting up a struggle in any of them.

Now, again, in our memories, we key in on the fact that Kyrie Irving had apparently already checked out on the team, but that’s a comparatively small part of what went wrong against the Bucks. The team’s rapid collapse was a team failure.

However, it looks like the team salvaged the right lessons from that dumpster fire–injuries chopped up the part of this season that went according to form, and the team was never really able to gel and put together a hot streak. But, by the same token, they also never looked particularly bad. There were no cold streaks either, and given the player health issues, I think that’s significant.

Then the team got in the bubble, and they got hot. If you dismiss the Wizards game, where no Celtic starter logged even a second of playing time, the C’s have now won 11 straight.

But that doesn’t mean much when it comes to the game this evening. I think the C’s are ready for the Raptors–and the Bucks. I’m pretty sure they’ll take care of business.

Page 2: Where the C’s Center Platoon is Working

After the Celtics watched Al Horford land a payday with the rival Sixers last summer and traded away Aron Baynes to facilitate the arrival of Kemba Walker, Boston was left without a defensive anchor patrolling its back line.

Despite all of the team’s perimeter talent, there was great consternation about the Celtics’ chances to compete with the East’s elite because of that void.

Danny Ainge quietly pieced together a ragtag group of big men. The Celtics snagged Kanter using $5 million from the room midlevel exception, re-signed Daniel Theis at the same modest price tag, plucked Vincent Poirier out of France, traded down and drafted Grant Williams late in the first round, and nabbed Tacko Fall on a two-way deal after he went undrafted.

All while the team crossed its fingers that a lone holdover, 2018 first-round pick Robert Williams, could make a leap.

So, the title of that article refers to Voltron, a Japanese TV show that was exported to the US in the 80s. And that’s how I knew Chris Forsberg wrote it.

Anyway, he goes on to compare the C’s centers to Pokemon cards, which is another Gen X reference.

But I’m going to talk about relief pitchers.

There was a time when relief pitchers fell into one category: Relief pitchers. Then you had the rise of the ‘closer’, a guy who was expected to get three, maybe four outs, and that’s it. And gradually the position evolved into the most complex part of a baseball team. You’ve got relief guys that specialize in facing left-handers or right-handers, guys who can handle a longer stretch if the starter gets chased early, ‘setup’ guys whose job is pitching before the closer, and so forth.

That’s how it is with the Celtics, and, quite honestly, I don’t think it’s good for basketball that one position can be filled by committee on a championship caliber team, but that’s how the game is being played right now.

It’s possible that, in time, Robert Williams will become a center versatile enough to earn playing time based on what he brings to the table in his own right, not just because of his ability to neutralize his opposite. Essentially, the hope is that center will someday become a position where the Celtics will force the other team to adapt.

Right now, though, center is a position where the C’s have to adapt rather than dictate.

Fortunately, the C’s coach, Brad Stevens, cut his teeth coaching teams that had to adapt and improvise to win. Last Tuesday I talked about how I knew Stevens would be a good coach, and here’s why I knew: I know what mid-major coaches are up against. Unlike guys whose interest in mid-majors starts with the tournament every year, the team I follow, the university I attended, is a mid-major. Following these programs from recruiting to the tournament, you see how many advantages big programs have.

Honestly, Mike Krzyzewski is not that great of a coach. But he’s a heckuva salesman. If you switched coaches before the 2010 NCAA championship game, Duke would still win.

But they would’ve won by more than two points.

My point–such as it is–is this: Stevens is a guy who learned how to coach in a very particular environment, and the lessons he learned can be seen in the way the C’s handle the center spot.

The players, meanwhile, have excelled in their roles, and I think that contributes to their willingness to sit for extended periods. They know that when their number is called, it’s because they’re being given an opportunity to succeed.

It’s one thing to ride the pines because the coach has forgotten that you even exist.

It’s another thing to ride the pines knowing that when your number is called, it’s because of something you do really well.

Brad Wanamaker passed ahead to him in transition, giving up two points to let Williams shine. He was expected to put on a show.

But Williams also knew if he missed the dunk, he would almost certainly find himself on the bench. Brad Stevens isn’t one to forgive a mistake like that.

“For sure,” Williams said chuckling, when asked if Stevens would have benched him for missing. “I expect him to.”

Fortunately for Williams, he didn’t miss.

“I really didn’t know what I was going to do,” Williams said. “I just didn’t want to miss. I didn’t want to come out the game. As long as I made it, I didn’t care what I did.”

Williams, I think, may end up on a track similar to Jaylen Brown. The two are probably the most athletic guys on the team. And both seem to be aware that athleticism only gets you so far. Jaylen came into the league with a suspect jump shot and a really bad handle. He’s improved considerably in both areas. Williams has not shown a similar level of improvement when compared to where Jaylen was after his second year, but there’s also been a huge difference in playing time (Williams has logged only 671 minutes of playing time in his career; Jaylen played 1,341 minutes his rookie season).

NBC Sports: Blakely: Celtics’ Game 1 win a success on and off the court | Forsberg: Hayward still not close, but could return to bubble soon