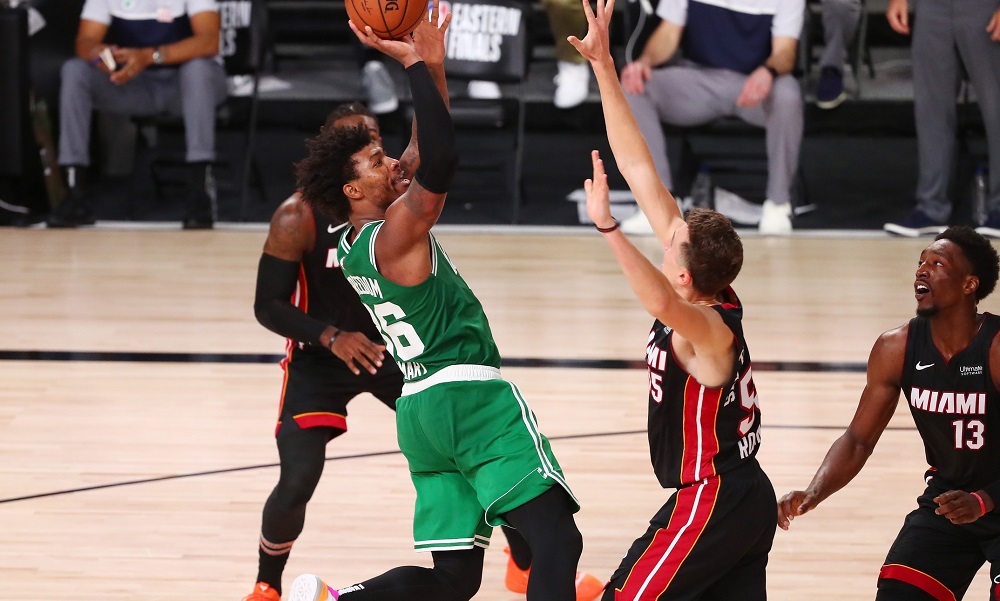 The Celtics asserted themselves in Game 3, and Miami had no answers, other than a desperate rally in the last 4 minutes that brought them no closer than 5 points. Too little, too late. The Heat never led at any time during the 48 minutes; according to ESPN, that hadn’t happened in Miami’s last 70 games.

Here are some nuggets that go beyond the recap.

Oh Gordie, we missed you. It was obvious that the Celtics had trouble with Miami’s zone defense in Games 1 and 2, largely because they weren’t moving the ball enough.

The Celts needed a skilled passer with size who could facilitate the offense and was also a threat to score from anywhere on the floor. What a coincidence, that’s exactly what Hayward brought with him on his return from injury.

Box score readers were saying afterward that GH had only 6 points, 5 rebounds and 4 assists. True, but his real impact was to restore normalcy to the rotation and to foster the ball movement that had been lacking. Boston had 27 assists on 41 makes in Game 3, compared to only 19 assists on 36 baskets in Game 2. They also limited their turnovers to 14, down from 20.

Hayward’s play also gave birth to this gem of a tweet.

Bill Russell once had six points in a Game 7 of the NBA Finals. That was the night he said of celebratory balloons in the rafters, “Those fucking balloons are staying up there.” Russell was also the head coach. And he held Wilt Chamberlain to eight FGA as the Celtics won a title. https://t.co/SXt7oIXOxa

Smart took over the offense in the final 2:24, scoring Boston’s last 10 points to clinch the win. Marcus hit a floater in the paint and then calmly drained 8 free throws in a row to hold off the Heat’s late comeback bid.

The TV guys criticized him one time for driving to the hoop early in the shot clock instead of trying to waste time, but it was really the right move. Keep attacking, Tommy Heinsohn always says. It’s better to be aggressive than hesitant. Smart was fouled on that play and made both.

Marcus, of course, imposed his will on the defensive end, rendering Goran Dragic invisible. The Heat guard had 29 and 25 in the first two games, but Brad Stevens moved Smart onto him and…

Smart held Dragic to 0 points on 0-of-2 FG over that span, per the NBA’s tracking data.

Minus 29! How is that even possible? If that continues, the Celts will breeze home.

Tyler Herro (drafted one spot before Romeo Langford, damn it) went off in the 2nd quarter, making 4 threes and scoring 16 points in the period. But he never made another trey and finished with 22 points.

In case you didn’t notice, Duncan Robinson shoots only from behind the arc. So far in the series he’s made 12 of 27, every one of the attempts from deep. Definition of a specialist.

Finally, Jae Crowder is 13 of 33 in the series, and only 4 of those were shots inside the arc. In Game 3 he was just 2 of 10, all threes. The defense taking Jae and Dragic out of the Heat offense was a key to the Celtics’ win.

Borrowing from my own Twitter to make a point.

4th quarter, common basketball move, flagrant foul. (So if you're defending and want to draw the F1, be sure to get hit by the elbow.) pic.twitter.com/vmT9ym0brz

It’s difficult to know anymore what is a flagrant foul and what isn’t. The only difference here that I can see is that Jaylen Brown’s elbow makes contact, where Kemba Walker was hit with an upper arm.

The thing is, though, the rip-through is a normal basketball technique. Both these plays were called offensive fouls, even though both defenders were crowding into the ball-handler’s space. But how did we arrive at the point of reviewing almost all inadvertent contact to the face as a possible flagrant?

And where’s the consistency in the rulings? Remember this? Of all the incidents, this one wasn’t even reviewed!

The NBA must address this after the season. The way I remember it, reviews of hard fouls began as a way to eliminate dangerous plays. Now, handing out flagrants for normal actions and accidental contact is overkill. Sooner or later in the bubble, that’s going to cost a team a playoff game.