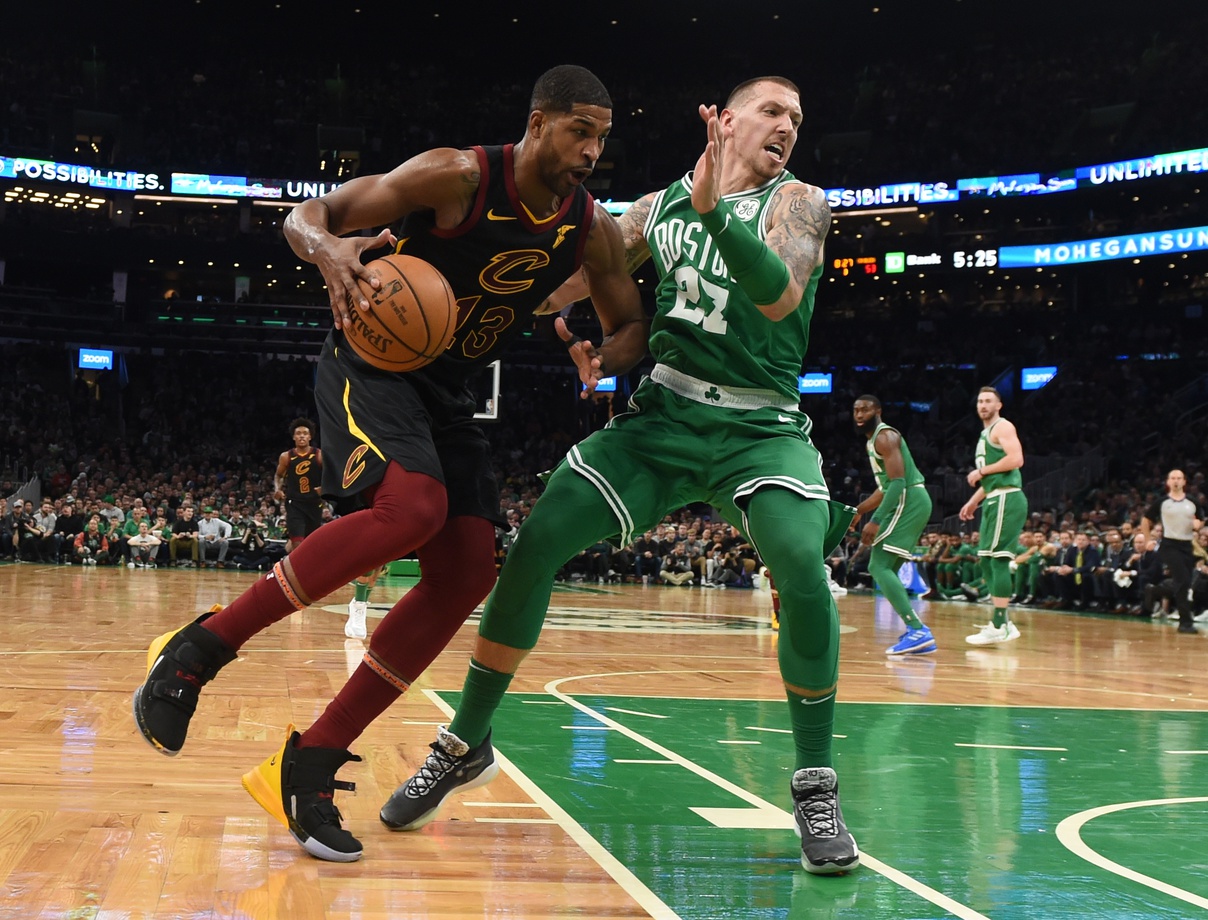 Thompson, an excellent rebounder and solid defender, will likely slide into Boston’s starting lineup in place of Daniel Theis. A void at center was created when Enes Kanter was traded to Portland on Friday.

Thompson, 29, agreed to a two-year, $19 million deal, according to a league source, using up Boston’s midlevel exception. He spent his first nine NBA seasons with the Cavaliers and Last year averaged 12 points and 10.1 rebounds per game.

Teague, 32, split last season between the Timberwolves and the Hawks, averaging 10.9 points and 5.2 assists per contest. He gives Boston backcourt depth following the departure of point guard Brad Wanamaker, who reportedly agreed to a deal with the Warriors on Saturday night. Also, Teague is a very good insurance policy if the Celtics proceed cautiously with Kemba Walker, who is dealing with left knee issues.

Phew. For a moment there, I thought the Celtics were going to sit out free-agency. Kidding!

The Celtics made a relative splash on Saturday by filling two major voids with good players. I’d give Danny Ainge a B+ for both signings.

Thompson brings some much-needed athleticism to the center position and will remove a huge burden off Daniel Theis. He also brings leadership and valuable playoff experience. From the Athletic’s Jason Lloyd:

Thompson departs ranking among the franchise leaders in a number of categories, but his club record for consecutive games played might be the most fitting illustration of the example he set. I wrote multiple times how Thompson is perfect for a rebuilding club. He shows up to work every day and competes every night. He keeps his mouth shut and he’s not afraid to get in a teammate’s face. His departure creates a leadership void in the locker room.

Plus, Perk loves the move:

The Celtics Finally got the missing piece to the puzzle. Tristian Thompson is exactly what they needed!!! Check Ball Got Damn it. Carry on…

Teague is a significant upgrade over Wanamaker, even though his shooting has slipped some:

Teague suited up 25 times for Atlanta this season, and while it was great to see the former All-Star back on the team, his play was so-so at best. He shot just 41 percent from the field and had a hard time fitting into the Hawks’ three-point barrage style of offense, making just 33 percent of his deep attempts.

His veteran presence was felt in the play-making department, however, and his assist to turnover ratio of 2.50 was best on the team. Teague showed he can still be a viable starter in the NBA while filling in for Trae Young in early February, racking up 18 points, six assists, four steals, and a rebound against the Celtics.

Teague should be more productive in Boston. Playing alongside Jaylen Brown and Jayson Tatum is easier than playing with Kevin Huerter and DeAndre Hunter.

On Page 2, there’s still a chance Boston could get something for Hayward.

Toss a pick to CHA to create $30m trade exception -> Throw the bag at Bogdan Bogdanovic (and a pick to the kangz) -> Profit https://t.co/LMIKPHQg9M

The obvious out card from all this is the three team, double S&T with Hayward and Bogdanovic. Do you want to have to pay off two teams to sign a full market contract for a non-star?

Probably yes at this point…

I should note any talk about Kings swingman Bogdan Bogdanovic is merely speculation. But it’s an interesting idea.

Many teams (Hawks, Lakers, Pacers) are reportedly interested in Bogdanovic’s services. The reported Hawks offer is 4 years, $72 million, something the Celtics could easily cover with the trade exception.

File under: highly unlikely, but dreaming is fun.

And finally, some goodbye messages.

I know there were some ups and downs, but I will always cherish my experience in Boston. I am forever grateful that I was given the opportunity to wear a @Celtics uniform and play in front of the Garden faithful.

Appreciate you Boston! Signed my first and second lol NBA contracts with a great organization. Loved hooping with all my teammates and coaches I came across my two season there, wish you guys all the best going forward and I’ll always be grateful for my time there. 💚

CBS: The Hornets gave Hayward one of the worst contracts in recent memory

NBC: How MJ played a role in Hayward landing in Charlotte