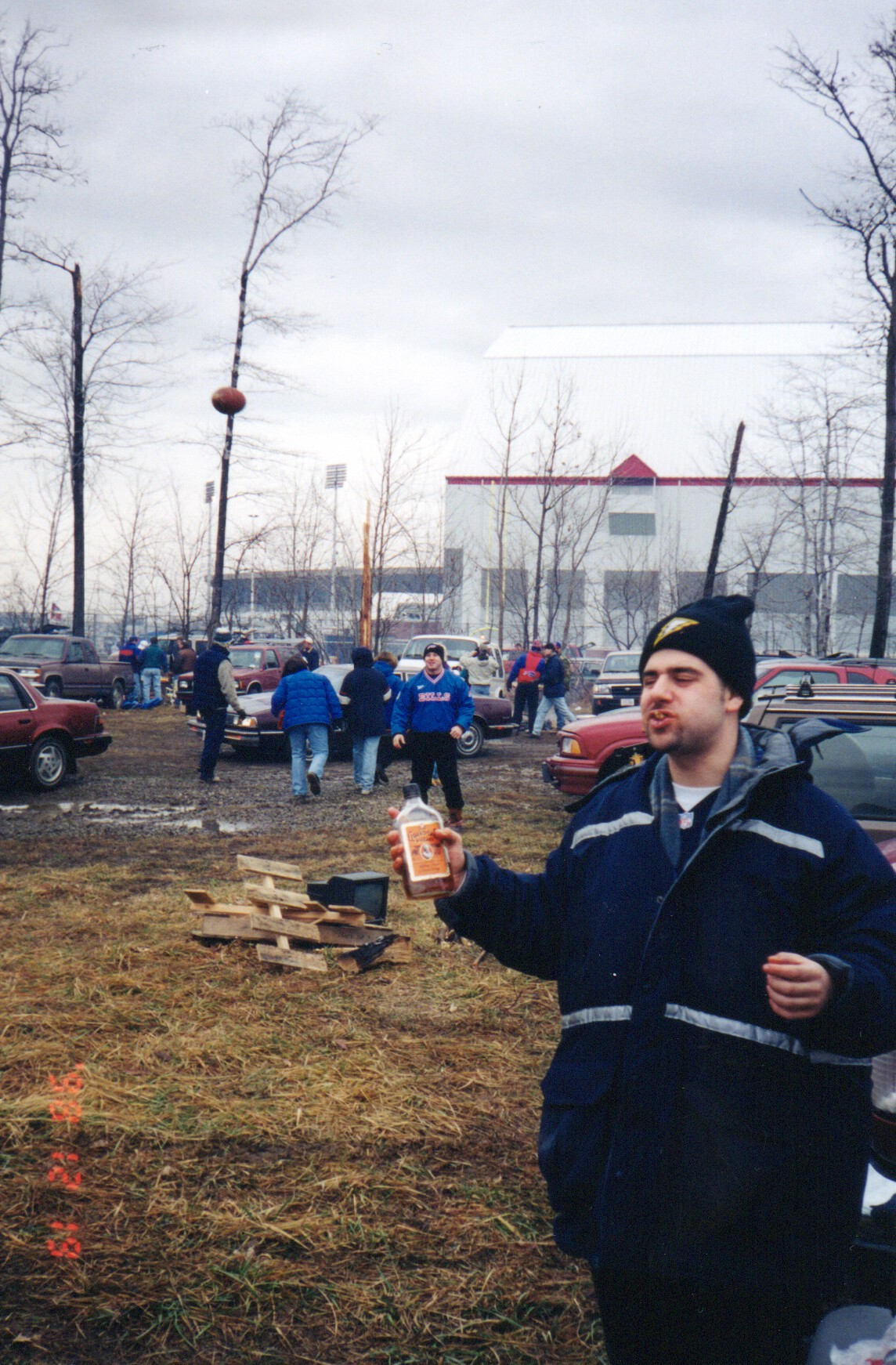 If you check the timestamp, you can see that this wasn’t even at a Charger game.  I was visiting my friend Graydon, who turned 50 this week, for the Bills game against the Jets.  As you can see, I was in full “Lucamode” that day.  I am washing down my chicken wing with a little Old Grandad.  The Jets beat the Bills and won the AFC East and a fight broke out during the game.  When I got knocked down just for being in the nosebleeds, a woman asked if I was okay.  “I had it coming,” I told her.

I actually have seen the Chargers play the Bills five times.  The first was in 1998 for Ryan Leaf’s first game.  Yes, we pulled that one out and started 2-0.  After 4 years in Rochester, I certainly felt a connection to Western New York.  Back then, there was no such thing as a “Bills Mafia,” just a bunch of drunken idiots in a field.  As you can see from the photo, I was all too eager to join in. 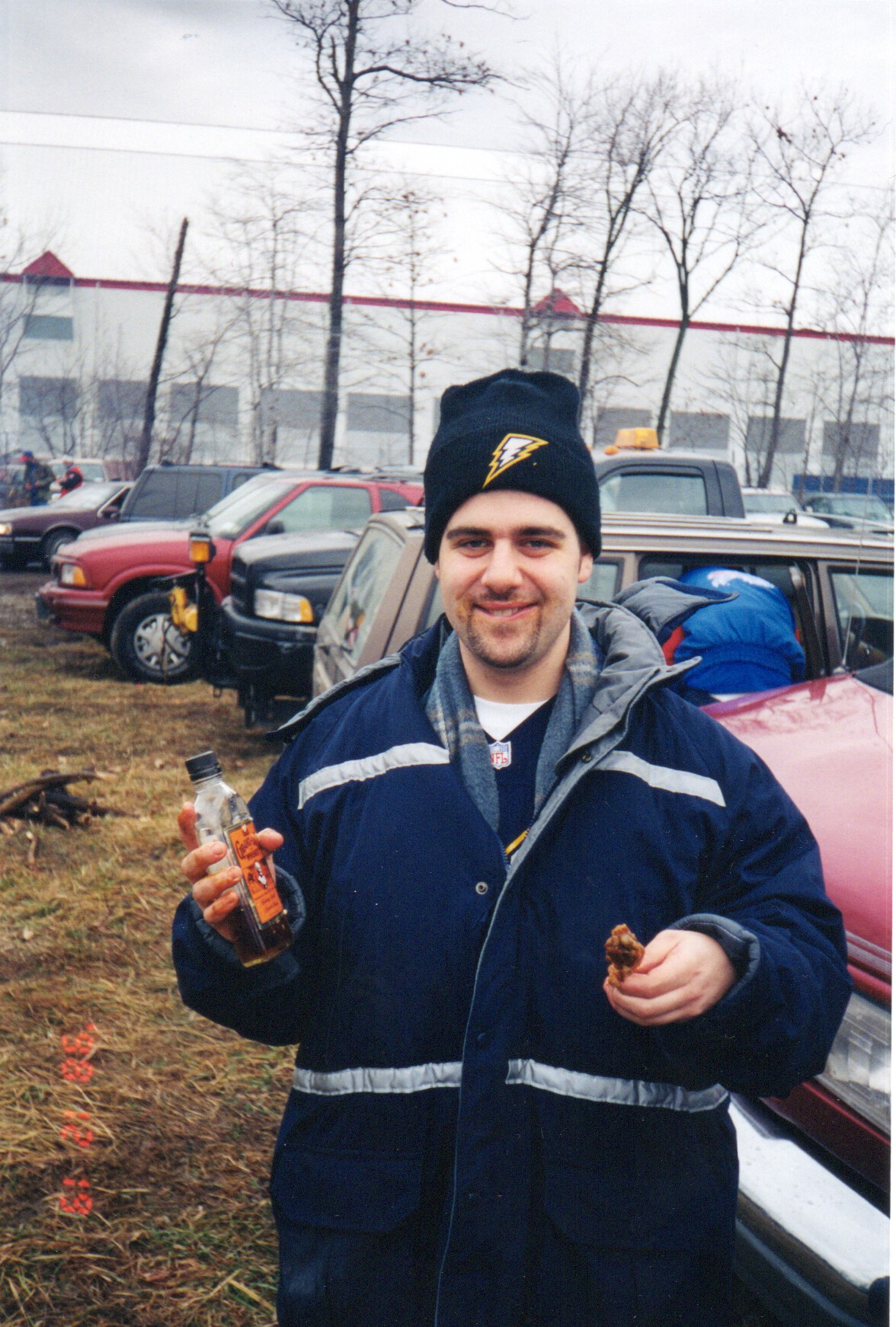 I am pretty sure at one point I had eye black on.  Anyway, I saw the 1-15 Chargers lose in Buffalo, when Moses Moreno came in at QB.  Reading the recap of that day, maybe the Chargers haven’t changed all that much.  We are still blowing leads, although I blocked out the fact that Neil Smith played for the Chargers that year.  I also saw the 2002 loss, which felt like an OT defeat at the time.  It wasn’t but after Steve Christie (who had actually beaten us in OT in the 2000 game) made a 53 yarder in the snow, it seemed like we might pull the game out.  Of course we didn’t.  I was really fucked up that day but do remember that there was the threat of a mass transit strike that Monday so I was hoping that I would at least not have to go to work the next day.

Yeah, that didn’t happen.  I did go to the 2014 game we won, but only because EJ Manuel couldn’t hit the side of a barn.  Danny Woodhead ended up being hurt for the year that day.  In 2018, I saw the game where Mike Williams caught his first touchdown.  It was also Josh Allen’s first start and the day that Desmond King was ripped by Anthony Lynn for a penalty.  I don’t think Lynn ever came down on another player like that as King is living his best life in Tennessee.  I can’t spend time wondering if he’ll get a ring, or Philip Rivers, for that matter.  I can’t ever root for a former player to win the Super Bowl since we never have, but God knows Phil would deserve it. 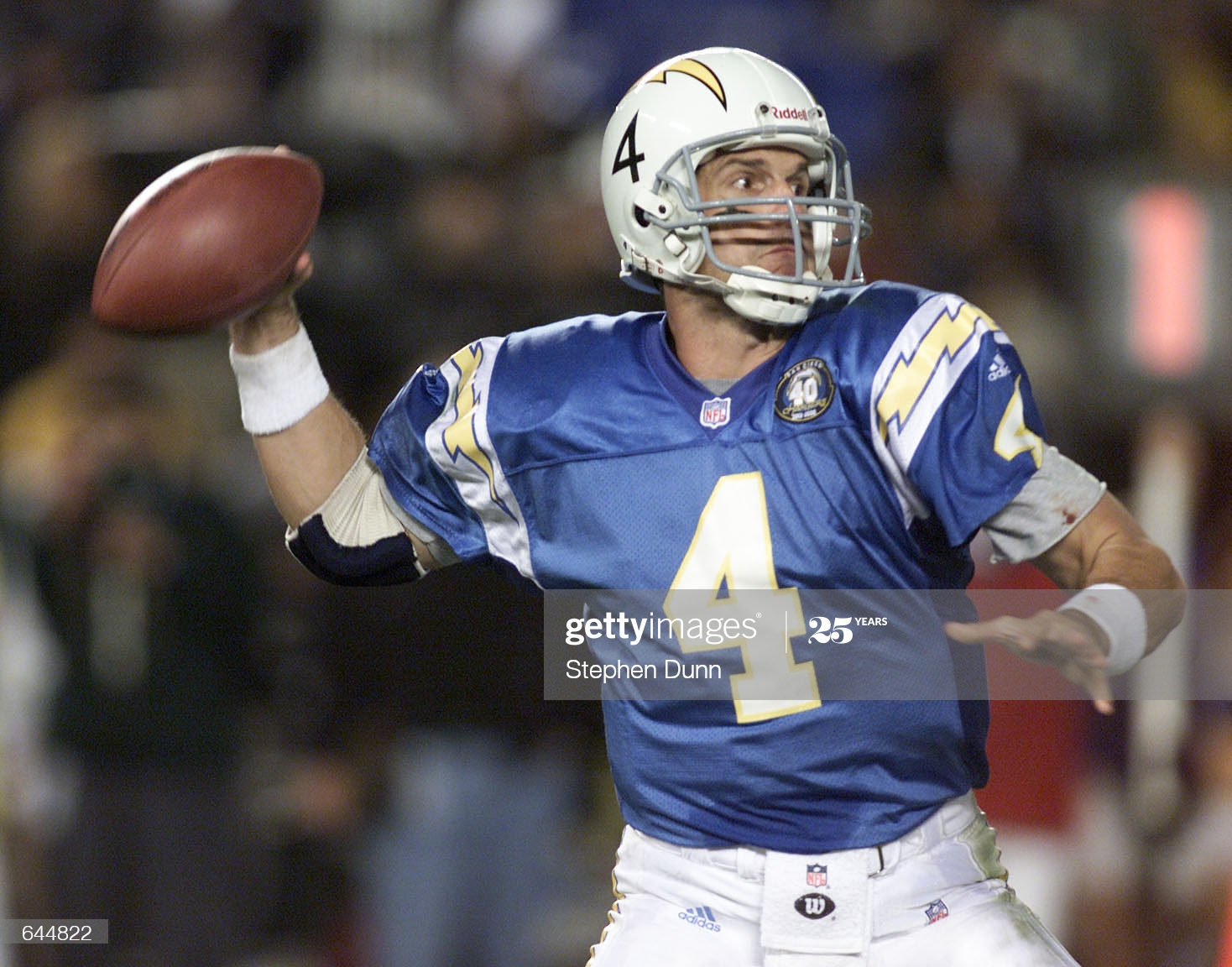 That isn’t from the Buffalo game, but a loss to the Raiders.  I did forget that we wore the powder blue uniforms that season.  I didn’t forget that we almost went winless, with the only victory being against a Warren Moon-led Chiefs team.  Rivers going to Indy and us drafting Herbert is one of those rare situations where it works out for both parties.  Even if Rivers wins a Super Bowl, it was the right call to let him walk.  What’s most concerning is that we easily could have lost to the Jets last week.  I see that my post may not have gotten published, but you can sense my attitude going into the game.  Campbell could have been flagged on that fourth down play, sadly.  Casey Hayward was abused all day, but he won’t be out there tomorrow.  Neither will Melvin Ingram, who may very well have played his final game for the Chargers.

It was nice to see George Stewart finally be held accountable for the horrid special teams play, although I don’t love that he’s still drawing a paycheck.  Like Isiah Thomas on the Knicks or Terry Collins with the Mets, can’t we just fire this guy outright?  I saw that the Chargers brought in “competition” at kicker, punter, and long snapper.  I put the quotes on competition because it didn’t seem like it was anything more than a empty gesture.  Did anyone really fear for their job and will they play better as a result?  Yeah, it’s great that Badgley hasn’t missed in a few games.  I still have no confidence that he’d make one when the pressure is on.  Of course, he could be cut tomorrow and do well for another team.  That’s the shittiest part of all.  It’s us, not them.  Lynn still can’t manage a game.  I didn’t have that big a problem with kicking a field goal to go up by 15.  You want to believe that the defense could close the Jets out from there.  Of course, they can’t.  To have Herbert do the hard count and then take a time out was a mistake.  There was no need to take one.  I admit that it didn’t occur to me at the time that we didn’t need to take a time out, but I don’t coach the Chargers.

That seems obvious, FAITHFUL READER, but it’s taken me a long time to come to that conclusion.  It also wasn’t clear to me that the 4th down on the sideline was juggled, but clearly that should have been challenged.  Think about it.  We have only beaten the Bengals, Jaguars, and Jets this season.  We could have easily lost to two of those teams.

There is no question that the Bills are better than us right now.  They are also coming off a bye week.  The Raiders almost beat the Chiefs coming off a bye week last Sunday, but we aren’t as good as the Raiders.  That hurts to say, but it’s worse that it’s true.  Right now, we are a last place team and I don’t see how that changes.

It will only be after that 8th loss that the team will be truly playing for next season.  We know that they already are, however.  Chris Harris comes back tomorrow, although he didn’t do much when he was healthy earlier in the year.  Ekeler is back, which is amazing considering he was limping onto the cart in Tampa.  Bosa is now facing the remainder of the season without Ingram.  I know Ingram didn’t have a single sack, but I wonder how his body will hold up.  Would I like for the Chargers to surprise us and upset the Bills?  Of course, but I sure as hell ain’t expecting it.

I guess that’s all for now.  The Chargers usually play pretty well at 1PM, despite flying in from CA.  Remember when Lynn made them stay in Denver last season to prepare for Mexico?  That worked out not at all.  Come to think of it, didn’t he also say there would be guys missing from Sunday’s lineup after the blocked punt in Miami?  Kelley missed a block on special teams even though Long takes forever to kick the ball.  Kelley and Murray have really had their confidence shaken this year.  Anyway, I’ll see you out there tomorrow.  Log onto Colorcast to hear my monotone rambling in real time. 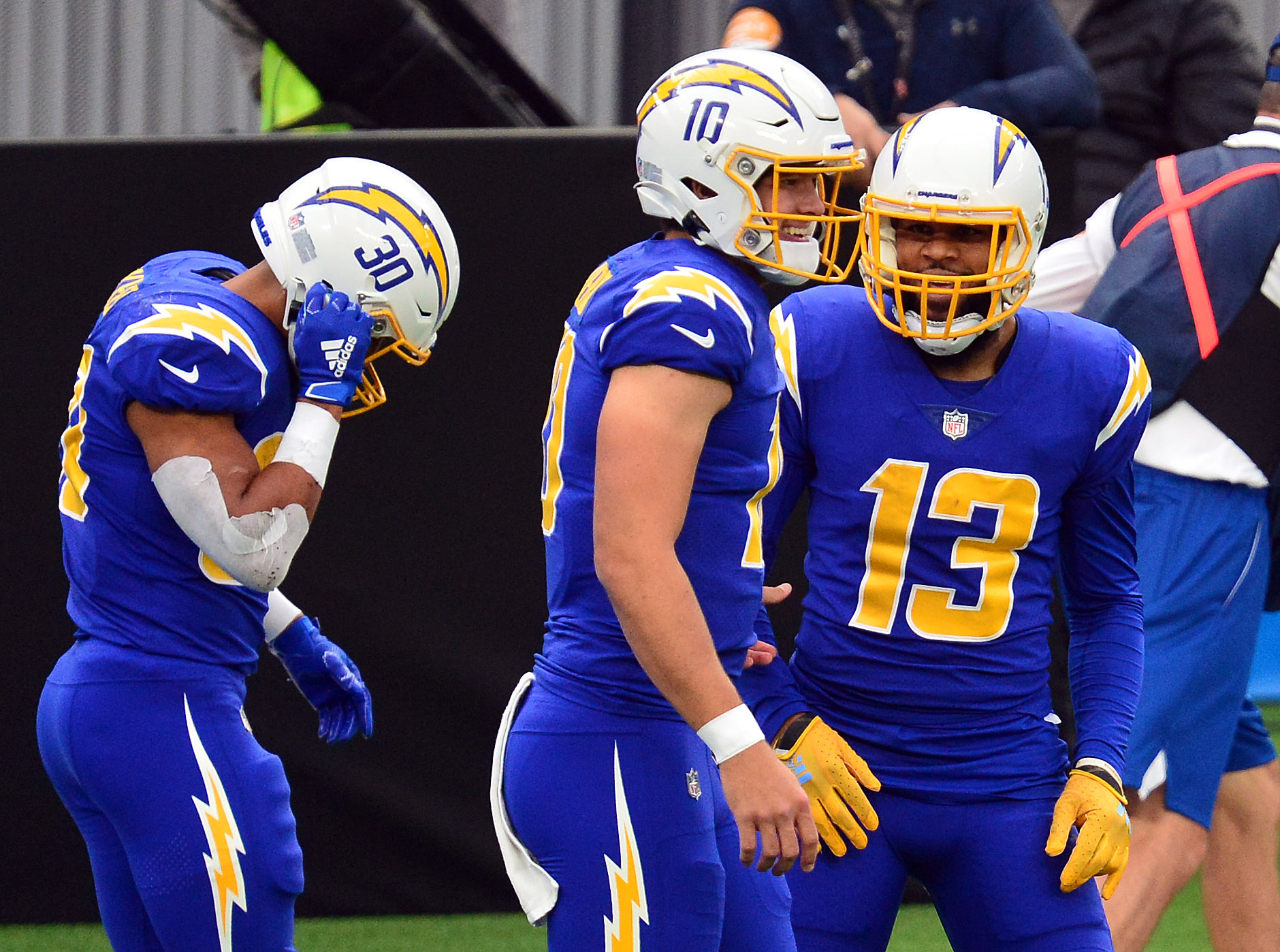