Your Morning Dump... Where Jaylen & Jayson are the future--and the present 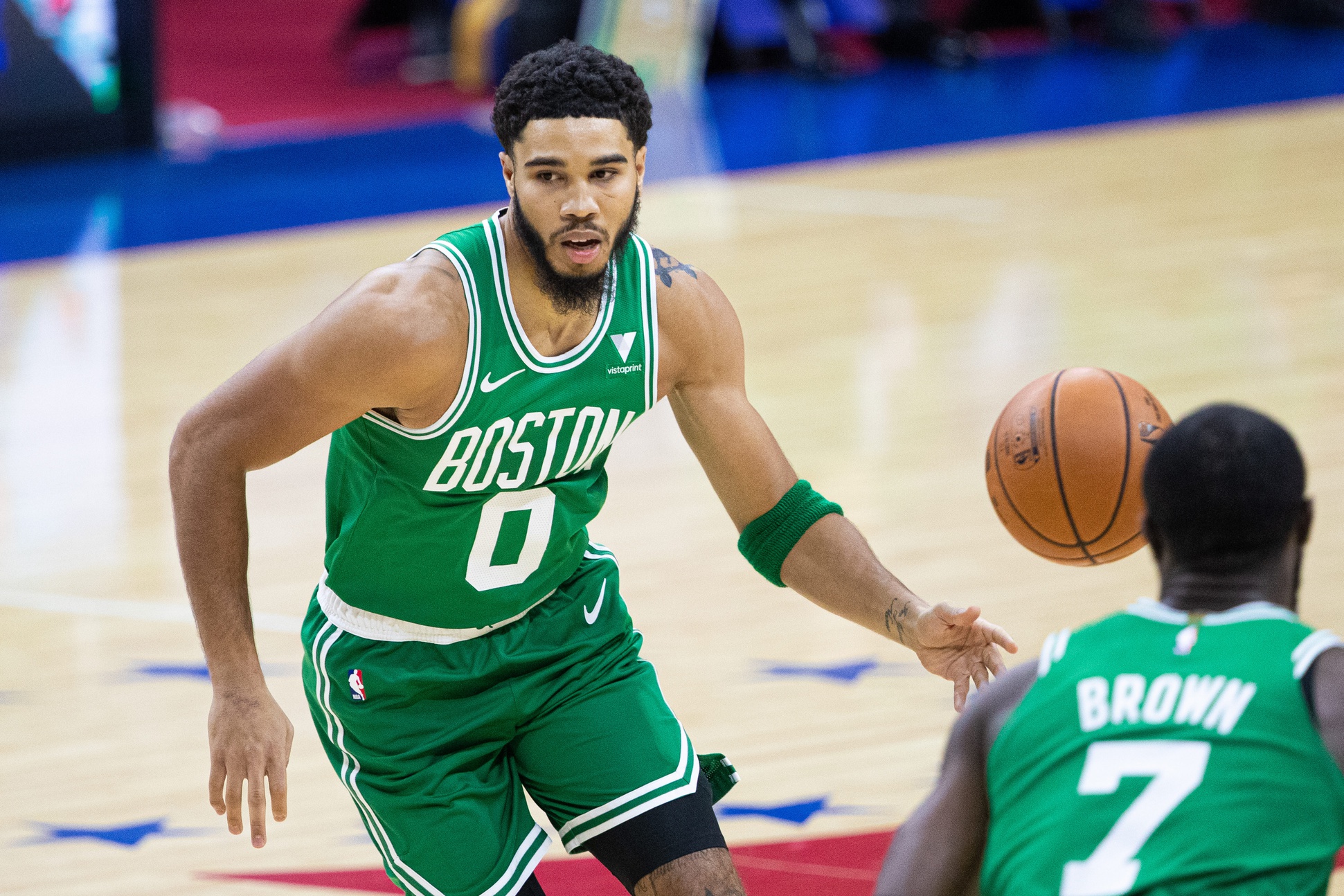 Your Morning Dump... Where Jaylen & Jayson are the future--and the present

The two faces of the Celtics franchise fielded zero basketball questions but once again used their voices to demand social justice. This in the aftermath of news that no charges would be brought against officers in the Jacob Blake shooting, and just hours after rioters stormed the halls of Congress.

It was a reminder that as good as the Jays have been on the court this season — and they’ve been exceptional — they continue to be even better off of it.

Displaying a grace well beyond their years, the Celtics stars yet again tackled tough topics with poise, and used their platform to continue making a plea for progress that has been frustratingly slow to come.

There has been debate already this season about which is the better and more impactful player. Is it Tatum, with his near-flawless offensive game and ability to splash threes or use his length and grace to score buckets? Or is it Brown, whose passionate work ethic has enabled him to become one of the game’s best midrange shooters, as well as a 3-point threat?

The answer is: neither. Both are equally impactful and their numbers this season are quite similar in a handful of categories. Tatum is averaging 26.3 points, Brown 26.2. Tatum is a better rebounder, but Brown is a better defender. Each is shooting better than 41 percent from the 3-point arc.

Instead of comparing the two or trying to determine the more talented one, Celtics fans should celebrate that each of these third overall picks has flourished.

The C’s have players who are 24 and 22 that are averaging a combined 52.5 points per game.

Of course part of that is because they have to do more scoring with the departure of Hayward and the delay in getting Kemba back.

It remains to be seen how far these guys progress, but I’m impressed with their work ethic, and their willingness to make each other better. That kind of a dynamic creates a culture that affects everybody who joins the team. And with Marcus Smart having a similar mindset, we’ve got a young team that is bent on getting better–whether it’s obvious progress like the Jays, or steady improvement that is less noticed–like Semi Ojeleye’s offense or Marcus Smart’s three point shooting.

I was not happy with the way the last two seasons ended. The 2019 season was one of hubris and the sort of unwarranted confidence that is a hallmark of the very young. Last season’s ending was frustrating, but for different reasons. The C’s were willing, mostly, to put forth the effort required to win. But they lacked that killer instinct.

Cats are predators–obligate predators, in fact, because their bodies do not produce certain necessary amino acids in sufficient quantities. They have to get those amino acids from other animals.

Yet, although obligate predators, they do not know, instinctively, how to kill their prey. They have an instinctive ability to stalk, and they are programmed to capture almost any moving object smaller than themselves.*

But once they have their quarry, unless their mother has taught them how to administer that killing bite to the neck, they will ‘play’ with their prey until it either gets away or they kill it more or less by accident.

So it was with the 2020 Celtics: Back in the day, Bill Russell and Wilt Chamberlain used to host each other for supper before–or after–games. But once the ref tossed the ball in the air, if you weren’t wearing a Boston jersey, Bill was going to make your life miserable. Marcus Smart has that demeanor. Larry Bird had it. Dennis Johnson had it.

And the 2020 Celtics as a whole didn’t have it. They would play with the other team, never quite figuring out how to finish them off. They succeeded, eventually, against Toronto–mostly because Toronto no longer had Kawhi Leonard–and then failed miserably against Miami.

But, again, this is a young team that’s growing into greatness, and while I could wish that the process would take less time, as long as it happens, I’ll figure out some way to enjoy it.

I led the blog with quotes from the Jays’ postgame presser on Wednesday. Brad Stevens also had some pretty strong comments about what happened as well. The reason for including those comments is to illustrate that the C’s under Wyc Grosbeck’s ownership group, with Ainge in the front office, are legitimately carrying on Red Auerbach’s spirit.

Granted, they haven’t had the run of success Red had, but they’ve also been snake-bit when it comes to injuries (the Big Three run was derailed by Garnett’s knee, then Perk’s knee, then Jeff Green’s heart, then Shaq’s calf, and who knows what the C’s might have accomplished had Hayward’s ankle not snapped five minutes into his first game in green).

But they’ve got that same attitude toward player advocacy. If a guy wants to speak out, the organization has his back.

Auerbach never interfered in Bill Russell’s off-court advocacy, regardless of how much negative attention it brought the Celtics. Many Boston-born Celtics fans are the sons and grandsons of people who preferred Tom Yawkey’s far less successful but far more palatable Red Sox–guys who only discovered their love for the Celtics after the greatest winner in league history hung up his Chucks for good.

But, see, Red never cared about what people thought about his team, so long as they won. I’m confident that even if it would’ve meant playing in an empty arena, he would’ve fielded the league’s first all-black starting five.**

When Wyc Grousbeck’s group purchased the C’s, one of the first things they did was make Red Auerbach part of the basketball decision-making process, after he had been window-seated by the ever-insecure Rick Pitino. Auerbach, for his part, was instrumental in the team’s subsequent decision to hire Ainge.

And so when guys like Paul Pierce and Kevin Garnett took a lowkey approach to politics, it wasn’t because the team was sitting on them and telling them to be quiet. And it’s no different with the Jays: Nobody on the team is pressuring them to take a stand. You can tell that these guys are simply speaking from their convictions.

* In my life I’ve had four cats. I’ve never owned a laser pointer. I know it’s an easy way to play with your cat, seeing how it offloads all of the movement on the cat while you sit on the couch, but by depriving your kitty of the ability to actually capture the object it’s stalking, you will eventually frustrate and annoy it, defeating the purpose of playing with it in the first place.

** He was similarly immune to criticism of the C’s mid-80s roster based on its color.

Page 2: Where four players are ‘questionable’ for tonight’s game

Four Boston Celtics players are listed as questionable due to health and safety protocols for their game against the Washington Wizards on Friday, the team announced.

Those four players [are] Robert Williams, Grant Williams, Carsen Edwards and Tristan Thompson. All four played in Boston’s win over the Miami Heat on Wednesday.

Presumably, these four players were exposed to someone who has a test result pending.

If indeed that’s what happened and that individual’s test comes back positive, it’ll be a longer quarantine for all four of those guys. More reason why regular season records are going to be particularly meaningless in this compressed and bizarre season.

Finally: Looking at the new guys

The brain trust can afford to be cautious with Kemba Walker, and when he returns, there is little doubt he’ll recognize the new pecking order and continue to be a superb teammate and scoring option. And the trade exception acquired in the Gordon Hayward deal is the enticing prize yet to be revealed.

Much of what has worked for the Celtics this season is familiar. Some of it is not. Here are a few thoughts on the new players on this year’s roster.