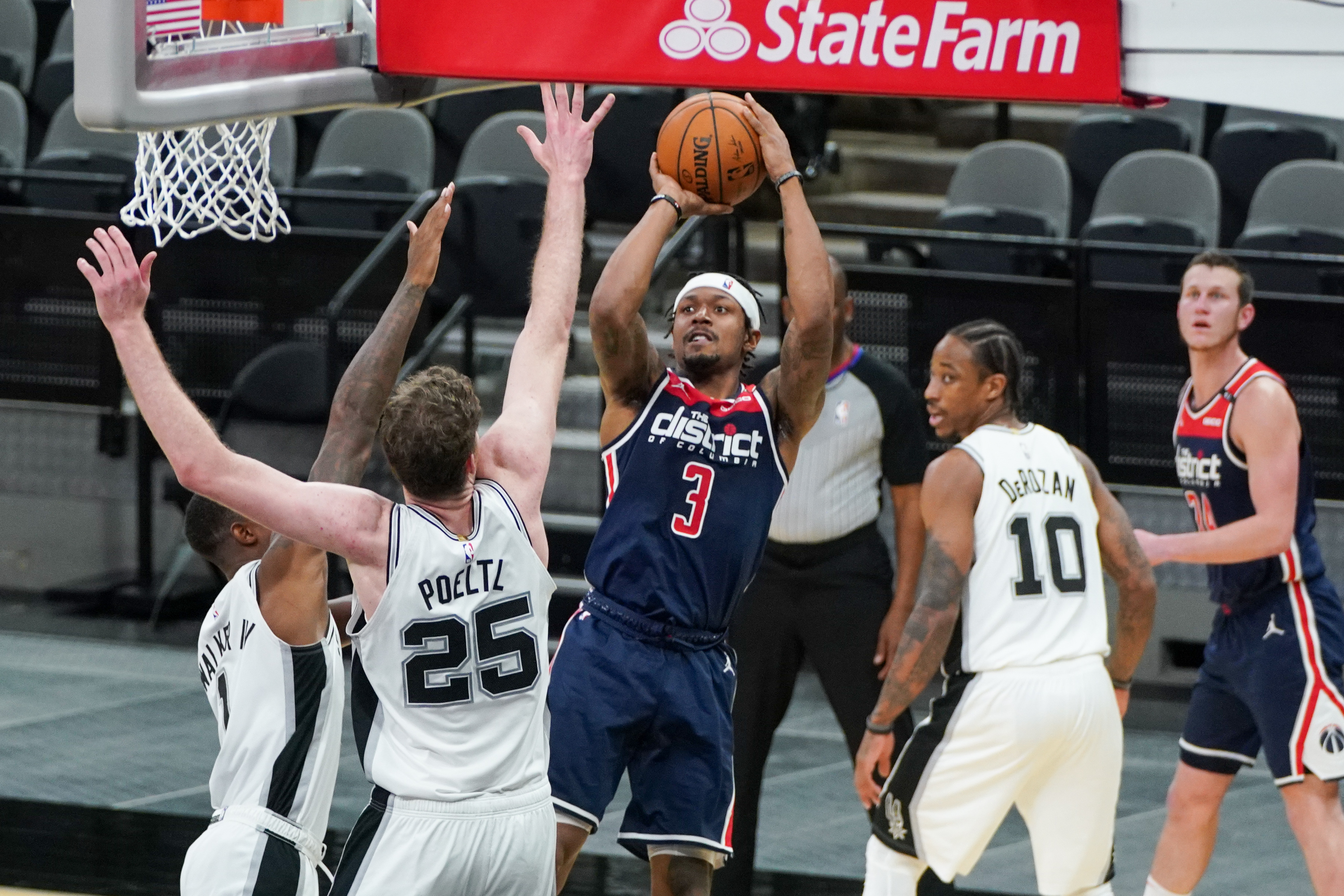 For the first time in 13 days, the Washington Wizards played a regular-season game following a six-player COVID-19 outbreak. With just 10 players available that have had just a few days to attempt NBA level conditioning, the Wizards were able to compete with the San Antonio Spurs for most of the contest. Washington would pull to within 5 points of San Antonio with 5:40 left in the fourth before the Spurs rattled off a 15-1 run to put the game away. Here are five takeaways from the game as well as Scott Brooks, Alex Len, Bradley Beal, and Russell Westbrook’s post-game media availability.

Russell Westbrook returned from his left quad soreness ailment to start for Washington, while Raul Neto was sidelined with a groin tweak from practice. Westbrook, Beal, Robinson, Bonga, and Lopez would start with Winston, Mathews, Len, Gill, and Bell off the bench. Of course, Alex Len and Jordan Bell have been with the team for just a couple of days as Washington needed reinforcement around their last standing big man Robin Lopez. Bell would play just three minutes of garbage time.

Isaac Bonga, Jerome Robinson, and Garrison Mathews have big opportunities in front of them as each of the three played over 32 minutes on Sunday. Bonga was just 3-for-10 from the field for seven points but did grab seven rebounds. Robinson had 16 points on 6-for-15 shooting to go with five rebounds and four assists. He’s being given a green light to take any shot he wants, but he will have to start hitting them at more efficient rates once players start returning if he wants to stay in the rotation. Mathews was 3-for-7 with all of his shots from deep. Once Deni Avdija, Rui Hachimura, and Davis Bertans the minutes Bonga, Robinson, and Mathews are seeing now will vanish without showing a reason for that not to be the case.

With Thomas Bryant lost for the rest of the season with an unfortunate partially torn ACL, Washington released Anzejs Pasecniks as the flyer was over with need for more veteran size. Former Maryland Terrapin, Len is reunited back in the DMV with Wizards assistant coaches David Adkins and Ryan Richman who he is familiar with from his days in College Park. Washington did their best to acclimate the eight-year veteran into the system with video playbooks, but Len admitted it will take at least a couple more games to work through things. In 21 minutes, Len had 11 points on 4-for-6 shooting including a three and five rebounds. Brooks likes the signing from Tommy Sheppard.

Russell Westbrook yet to reach expectations

Thus far, the John Wall for Russell Westbrook trade has been a disaster for the Wizards. Westbrook continues to deal with a quad injury that began in training camp in mid-December, re-aggravated at times, and as Scott Brooks likes to paint as a badge of honor that the nine-time All-NBA point guard is willing to play through. Whether the ailment is impacting Westbrook a little or a lot, he does not look like the Hall of Fame point guard he should be remembered as. He knows it and is not making any excuses, but time will run out early for the 3-9 Wizards.

“Definitely not where I need to be on all aspects so I just got to be better and get my shit together.” – Westbrook

“Everything’s weird,” Beal summarized the Wizards season so far. The two-time All-Star self-described his 11 points on 5-for-13 first-half showing as “ass”, but faced countless double teams and traps on his way to 31 points for the game. At 3-9, missing six players for the near future, and having a high volume of games in a short amount of time in the second half of the to be announced season, the Wizards are going to struggle to even contend for the 7-10 seed play-in tournament at this rate.

“We don’t have any camaraderie problems, any character problems. We’re more or less pissed off at ourselves and how we’re playing. It’s not like we’re giving in, giving up. It’s a frustration, it’s an individual frustration and a team frustration. We all look ourselves in the mirror and we all just got to be better. We all just got to rile up together, understand that the odds are against us, but we still have enough to win.” – Beal