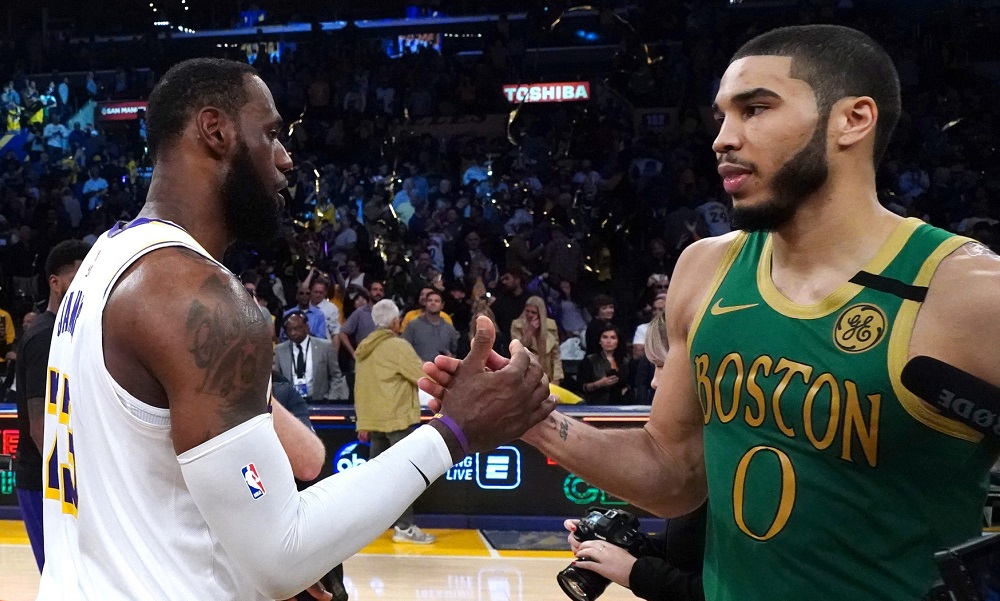 During normal times, games between the Celtics and Lakers just feel different. Former players return to TD Garden or Staples Center to watch their old teams play. Famous fans, who might miss lesser games, show up in droves. Last year, in Boston, David Ortiz and Snoop Dogg sat near each other in the section across from the Lakers bench. Those guys don’t show up when the Celtics host the Kings.

They won’t show up for Celtics-Lakers this year. No fans will. As LeBron James said, “It won’t have that rivalry feel.”

Celtics coach Brad Stevens agreed TD Garden won’t have the same energy Saturday night as it would during a more regular season.

“First of all, once you start, once you tip I think that it’s a game, but I totally understand what (James is) saying from the standpoint of the first game of the season walking into TD Garden getting ready to play Milwaukee, it was like, ‘Man I wish the other 19,000 people were here with us’,” Stevens said. “And even on the road when you don’t get a chance to play in those environments – a road win is one thing but a road win and in a raucous environment in front of fans is a totally different experience. We’re all doing our best to navigate this. The NBA is doing its best to navigate this, but it’s not as good without fans.”

The Athletic: Celtics’ starting five finally has chance to jell as Lakers arrive in Boston

People say it all the time. “The NBA is better when the Lakers and Celtics are contenders.”

I’ve never been happier watching the NBA than I was during the six seasons of 2013-19 when the Lakers missed the playoffs. Even when they got LeBron, they flopped his first year. That’s my kind of NBA. Last season, when the Lakers tied the Celtics with 17 championships, not so much.

Sure, the rivalry is epic and was the league’s most compelling story of the 1980s. But in my eyes, that didn’t compare to the ’60s, when the Celtics went 6-0 vs. the Lakers in the Finals. Lakers fans dismiss that record – I would too if I was in their shoes – because most of their titles have been won since the ’80s.

But guess what? If the Lakers had beaten Bill Russell’s Celtics even once in the Finals, then a) they’d already have the most titles and b) their fans would have a very different take on the assumption that the old days was the era of “plumbers and truck drivers.”

If any Lakers fans are reading this right now, they’re no doubt telling me to eff off. That’s fine; they hate Boston just like we hate LA.

Speaking of their fans, I was talking politics with my best friend, a fellow lifelong Celtics fan, and he told me about the psychology concept of collective narcissism. It’s the tendency to exaggerate the positive image and importance of a group the individual belongs to. In layman’s terms, they think they are better than you.

Although my friend was talking about a certain political faction, honestly the first group that came to my mind was Lakers fans. If you’ve spent any time reading tweets from the Lakers fan base, you know why. They’re more entitled than a hedge fund CEO.

Lakers fans claim that their squad is the best franchise in NBA history. That is wrong, because it ignores:

Have the Lakers had great players over the years? Obviously. Magic, Kareem, Worthy, Shaq, and Kobe were the greatest of the greats. Of course they won titles, and they were all acquired through shrewd trades and signings that would’ve made Red Auerbach proud. I have great respect for that.

But signing LeBron happened because the Staples Center is a few miles from Hollywood. Then the trade for Anthony Davis was possible simply because he wanted to play with LeBron. The LA team that won it all in 2020 was built more by luck than managerial genius.

So, bottom line, beating the Lakers is the most important thing the Celtics can achieve in the regular season. And about tonight’s game:

Does anyone believe either of them will sit out this game? No, didn’t think so. LA has lost two straight, so both stars will probably be extra motivated to avoid a third. The Celtics need to match that energy and take care of business on defense. From The Athletic article:

The Celtics have struggled to protect the paint this season. The Lakers rank sixth in points in the paint per 100 possessions. This matchup will put a lot of stress on the inconsistent Boston defense.

What might help guard the paint is an increase in Timelord minutes. And a superstar performance from The Jays wouldn’t hurt either. But in any case, fans, no fans, doesn’t matter. It’s time to beat bleepin’ LA.

Related – Globe: Lakers to invade Garden, but no matter how intense it gets on the court, atmosphere won’t be the same

MassLive: Brad Stevens not taking Celtics-Lakers for granted, ‘This is a special opportunity, a special rivalry’

There have been reports about the Pelicans clearing some salary by dealing away a player or two. Naturally, the Celtics are rumored in the mix.

The Pelicans reportedly have held trade talks involving Lonzo Ball, JJ Redick and Eric Bledsoe. Would any of them make sense for the Celtics trade exception? https://t.co/ykKQGeU2Bk

Danny Ainge and Pelicans GM David Griffin have a long history of doing deals together and have a strong relationship dating back to their days working together in Phoenix so with the Celtics holding a $27.5 million trade exception, any available names are worth investigating for this front office. The question: Would any of these potential New Orleans names on the market make sense for this Celtics roster? Let’s look at each of them to see if there are any strong fits.

B-Robb examined three possible trade targets: Lonzo Ball, JJ Redick and Eric Bledsoe. His conclusions: 1. no; 2. only as a backup option at a bargain price; and 3. hell no. (My two cents: don’t even think about getting Bledsoe. Yuck.)

Redick is intriguing because the Celtics definitely need more three-point shooting off the bench. Perhaps a move to a team with title aspirations would reinvigorate JJ.

Could Boston get Bradley Beal, who perhaps wants out of the Wizards’ losing situation? Except for The Jays, I would trade anyone – including Marcus Smart – to get Beal’s talent, but Chris Forsberg unfortunately brings us back to reality.

Even if you’re among the most bullish on the futures of recent first-rounders like Romeo Langford, Aaron Nesmith, and Payton Pritchard, it’s unlikely that anyone in that group is enough to muscle your way into the conversation for an All-NBA talent.

The Celtics were once able to inject themselves into any trade chatter when they might have been more open-minded to the idea of moving Tatum or Brown. Now, as the centerpieces of this team, it’s harder to shape deals.

Boston is more likely looking for pieces that can accentuate their Brown-Tatum-Kemba Walker-Marcus Smart core than necessarily seeking another top-level star.

Whatever Danny Ainge decides to do on the trade front, we know the Cs can’t go into the postseason without grabbing some reinforcements. They tried that last year and it didn’t go well. Against all of our instincts, Celtics fans just have to be patient.

Bill Russell, the legend, and Grant Williams, second-year back-up, are separated by six decades and a world of talent, yet they still share a bond over something they both care about deeply. It’s part of being a member of the Celtics fraternity.

Congrats to @Grant2Will – recipient of the Bill Russell Mentoring Award! It brings me great joy to see a fellow @celtics player recognized for his work in the #mentoring field by @MENTORnational which I helped found 30 years ago. #MentoringMonth #MentoringAmplifies @nbacares @nba https://t.co/d5yhsacn23

Globe: What will it take for the Celtics’ Big Three — Jayson Tatum, Jaylen Brown, and Kemba Walker — to find their rhythm?