Rapid Recap: Smart returns but Celtics fall to Nets behind 40 from some guy 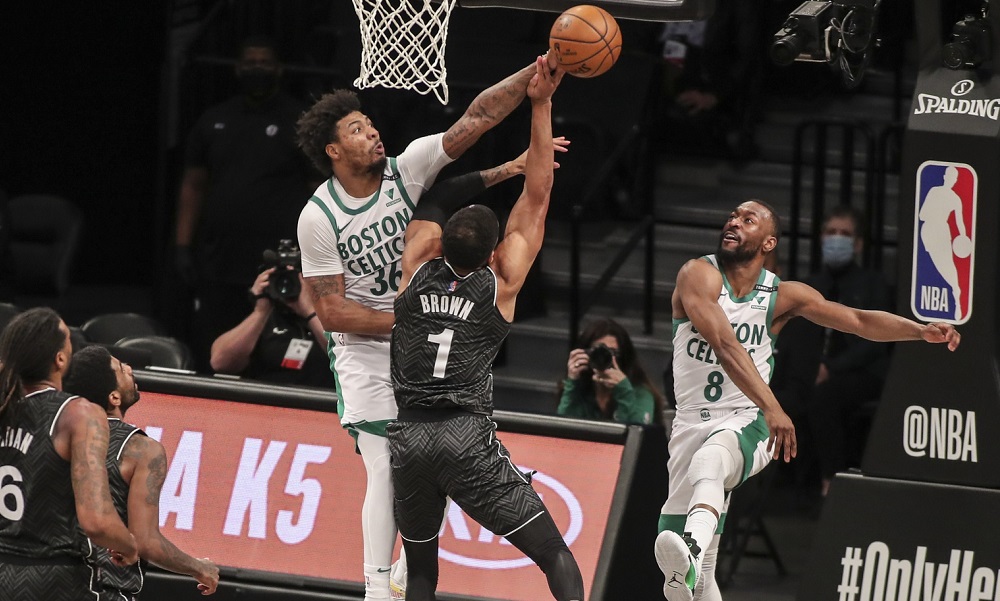 Rapid Recap: Smart returns but Celtics fall to Nets behind 40 from some guy

The Celtics began the second half of the season with a reality check in Brooklyn. Boston held the lead a good portion of the game, and was within 2 points after three quarters. But the Nets took the fourth quarter by 10 and won going away, 121-109.

The Nets were without Kevin Durant, and James Harden was held relatively in check (22 points, 6 of 16 shooting). And yet, it didn’t matter because some guy named Kyrie Irving (sounds very familiar) buried Boston with 40 points on 15 of 23 shooting, including 5 threes. The Nets made 19 threes, including the bench shooting 10 of 16 from the arc.

The fact is, Brooklyn is a very deep, talented team, and the Celtics have been no threat to them in any of their three meetings (including preseason) so far. Doesn’t bode well for the playoffs.

Marcus Smart was back and played the last five minutes of each quarter, finishing with 19 points. Jayson Tatum led the Celtics with 31 points on 13 of 22 FGs, and Daniel Theis was strong with 17 points and 8 rebounds. However, Jaylen Brown was brutal (5 of 23 for 13 points) and Kemba Walker disappeared (9 points in the first 8 minutes, but finished with only 11).

The Celtics announce they’ll be starting Kemba Walker, Jaylen Brown, Jayson Tatum, Daniel Theis and Tristan Thompson. Not a surprise Marcus Smart is coming off the bench, given he’ll only be playing about 20 minutes.

It takes Harden all of 1:36 to draw his first foul.

Picking up right where he left off#Celtics Rewind presented by @tmobile pic.twitter.com/XBKlcwLP1F

A bench lineup with Smart, Jaylen, Pritchard, Robert Williams and Grant Williams shows how much health means to the Celtics.

Second quarter, Nets caught up simply because they started to make shots (55% in the period after 39% in the first).

8 point explosion for Kyrie dribbling through the #Celtics’ 3 wing lineup. 51-45 just before half.

Celtics starting the 2nd half pic.twitter.com/2hYIQb45Co

put it right back pic.twitter.com/D9ho8FPHKl

88-86 Nets after 3. This one has been a lot of fun, and should go right down to the wire. Kyrie Irving has been sensational against his old team, and has 32 points, while the Nets have shot 40% from 3. Jayson Tatum has 24 for Boston, which has gone 11-19 from the FT line.

you have to see this for yourself pic.twitter.com/eNsSJoKgeV

…but the game started to slip away.

Jaylen’s playing like he really needs the All-Star break.

Kemba Walker's first bucket since the first quarter there.

Celtics got to within 3 points a couple of times, but the Nets always answered.

Big swing there. Theis misses a wide open 3, Kyrie comes back and drills a tightly-contested one.

Jayson has made everything this half and to go even one possession without him touching it kills me, especially when Kyrie and Harden are involved in literally every Net action

Good news for the Celtics is that Marcus Smart is back and looked good. Bad news is the Nets still won by 12 without one of the 3 best players in the world.