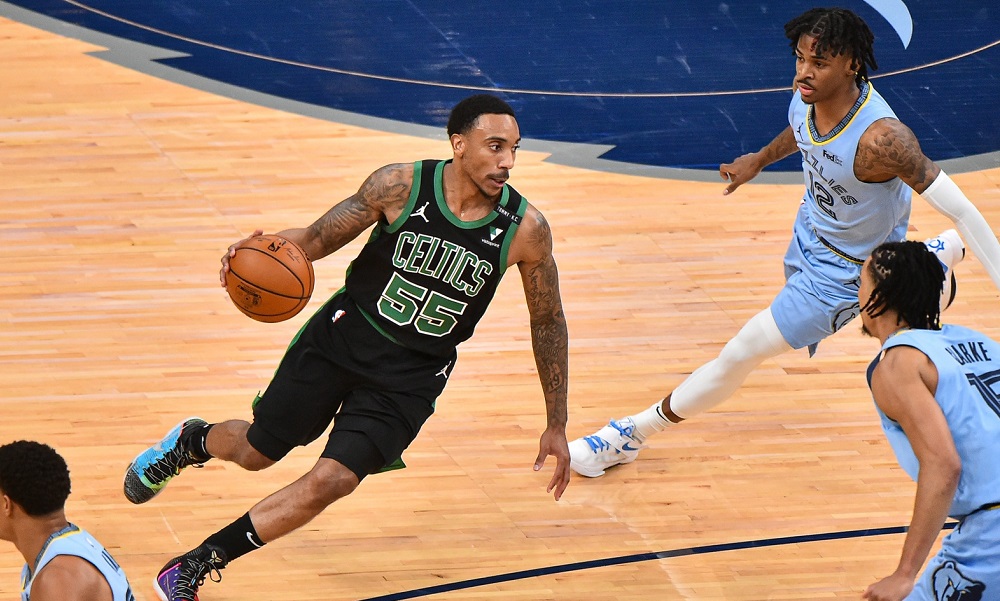 The Celtics began their four-game road trip by letting the Memphis Grizzlies steal a win. The Cs played with spirit and effort that had been lacking recently, which was a welcome change. Jaylen Brown thought they deserved the W.

"We had this one. We played really hard… It's definitely one we want back."

With Kemba Walker sitting again on a back-to-back, and Jayson Tatum falling ill less than one hour before the game, Brad Stevens needed to plug in a backcourt starter. He could’ve gone with Payton Pritchard, or perhaps Aaron Nesmith, who’d been back in the rotation recently.

Instead, Brad called on Jeff Teague, who had contributed very little this season and didn’t even see the floor in the last two games. It was baffling, and more important it was continuing the erratic nature of Brad’s use of personnel. The second unit guys have been jerked in and out of the lineup all season, and it’s logical to think that’s why the entire team has performed so inconsistently all season.

But in this one instance, at least, Brad was 100% correct. Teague played 39 minutes, made 10 of 12 shots (2 of 2 threes), had 6 assists, and scored 26 points, his highest total in two years. In the overtime, he scored 6 of Boston’s 9 points, all on nifty driving finishes at the rim. Teague’s production overall was at least as good as the Cs might have gotten from Kemba.

This actually was the Teague that we expected to see all along, a capable backup and spot starter during Kemba’s knee recuperation. This game was likely just a single night reliving the glory of Teague’s one All-Star season in Atlanta. It would be too optimistic to hope it becomes his normal.

But if Teague could channel his experience into this type of performance even just for 10 minutes per game down the stretch and into the playoffs, that would be a crucial upgrade for the Celtics at just the correct moment.

Jonas Valanciunas is listed at 6-foot-11, 265 pounds – taller than Daniel Theis and beefier than Robert Williams. For much of the night, JV used that size to help the Grizz dominate the paint. Valanciunas finished with 16 points on 7 of 10 shooting, and 19 rebounds (7 offensive). 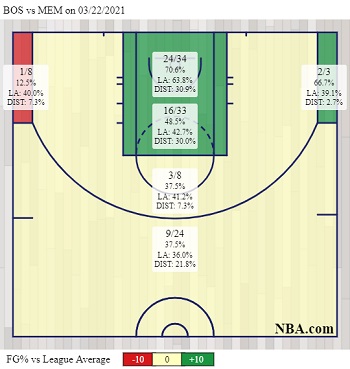 That was just part of the story. Memphis overall scored 80 points in the paint to Boston’s 54. The Grizzlies simply drove the ball to the rim on almost every possession for all 53 minutes of the game. Look at their shot chart: 67 of 110 shots came in the lane. Memphis also took down 54 rebounds, 17 of them on the offensive glass.

Surprisingly, those 17 offensive boards only led to 11 second-chance points. Also, the driving didn’t get them many free throws (just 15). But the constant pressure was key to Memphis winning the game.

Yes, the Grizzlies dominated  the paint, but the Celtics’ bigs weren’t helpless. Theis played 25 minutes, shot 5 of 12 (2 threes), and dunked off a lob pass with 7.3 seconds left to create the need for overtime.

Rob played nearly 28 minutes (it’s creeping up), made 7 of 9 shots (including a nice elbow jumper), and blocked 4 shots.

To their credit, the pair also improved the paint defense in the fourth quarter and overtime. Memphis had 68 paint points at the end of three quarters, but just 12 more after that. Valanciunas scored only one hoop in those last 17 minutes.

It’s been well-discussed that Boston had single-digit free throw attempts in three of the last four games before Monday. The exception was last week in Cleveland, when they were 20 of 29. Same thing last night, the Celts made just 15 of 24. In the last 4 minutes, Timelord missed a pair and Marcus Smart clanged an and-one opportunity – 3 points missed in a game that went to OT.

The Celtics need a night where they take a lot of free throws and make 85-90% of them. Would go a long way to improve their dismal crunch-time record: the Celts have played a league-high 29 games that had a margin of 5 points or less in the last 5 minutes. They’ve also lost a league-worst 18 of those.

The Celtics normally win when they have at least 25 assists and make at least 14 threes. Last night: 31 assists and 17 of 35 three-pointers. However, those couldn’t overcome the 132 points and 38 assists racked up by Memphis.