Your Morning Dump… Where the breakout season continues for Robert Williams 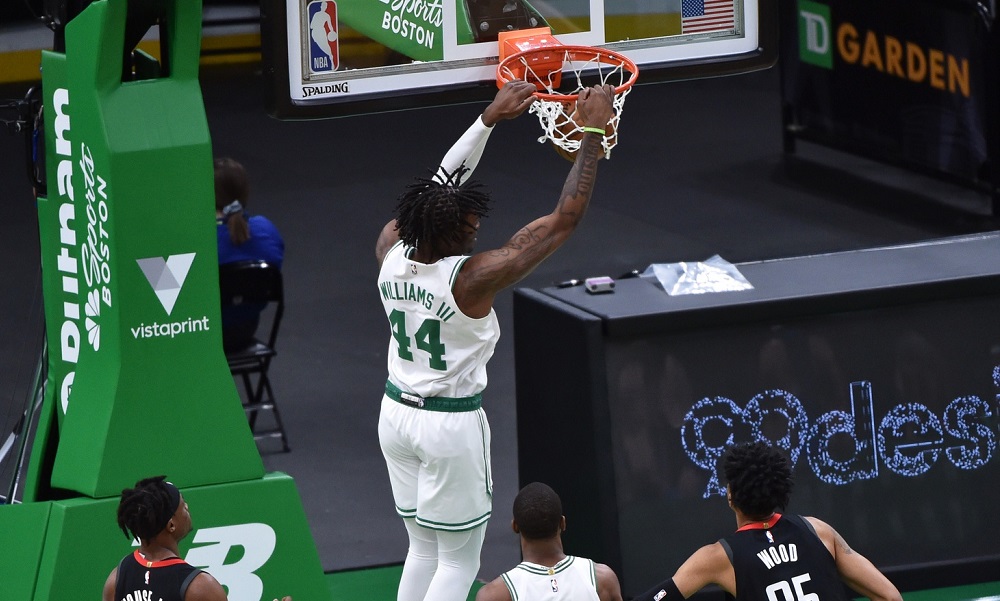 Your Morning Dump… Where the breakout season continues for Robert Williams

Williams the playmaker, scorer, rebounder: It seemed every time Williams was part of anything Friday, it ended up as a positive for the Celtics. The 23-year-old center returned from his one-game absence Wednesday as he sat because of an illness. From tipoff, Williams was just about everywhere and on triple-double watch. It wasn’t that he was scoring — from a lot of great passes — but he was dishing some nice assists and rebounding at a great rate. Williams didn’t quite earn his first-career triple-double, but he was back to his stat-stuffing ways as one of the best players on the court Friday.

He joins Nikola Jokic and Wilt Chamberlain (3x) as the only centers with a 20/8/8 game on 100% shooting in NBA history. pic.twitter.com/WaH4zCDHVP

When you set career highs in both points and assists while not missing a shot, that will get people’s attention. This was another chapter in the Timelord saga, where we no longer joke about him being late to his introductory press conference, and instead rave about his breakout season in progress. It’s one of the bright spots in a pretty dull season.

Rob probably wants to play against the Rockets every night: in two games against them this season, he took 16 shots and made 16 shots. Actually, he shoots nearly that well all the time. This season his field goal percentage is 72.7%, which puts him second in the league among those who’ve played at least 30 games. Last season his percentage was also 72.7%; and in his rookie year it was 70.6%.

Timelord is getting his opportunity this season, and he’s taking full advantage, which is crucial for the team. It’s also exciting as hell to watch him develop right before our eyes.

On Page 2: More thoughts about the win

OK, it was against the hapless Rockets, but the Celtics have found that no win can be taken for granted (cough, Pistons, cough cough, Cavs, cough). The challenge now is to build on that.

Evan Fournier gave us a glimpse

He struggled for his first two-plus games, but that changed dramatically in the fourth quarter.

Evan Fournier is the 2nd Celtics player over the last 25 seasons to score 20 points on 100% shooting in a quarter, joining Paul Pierce in 2009 vs the Bulls. pic.twitter.com/dvg92OBXBn

“It obviously didn’t feel good waking up after 0-for-10. I don’t think I shot 0-for-10 in my career,” he said. “It felt like shit, to be honest, but you got to move on. You have a game the next day and you have to keep moving forward. Like I said many times, I try to stay in the moment and the next day.”

And herein lies the twofold find in Fournier. The Celtics have needed two things: scoring off the bench and someone who doesn’t hear a flushing sound in his brain when adversity hits. Fournier could be both.

“Early on in my career, when I had a few bad games in a row, I used to be really hard on myself and talk to me in a way that wasn’t positive,” he said. “We feel very deflated and I would be down all day. When I had a great game or a few games in a row I would really perform I would feel incredible. Like, I would have extreme confidence. Over the course of a season with 82 games or 72 this year, you know, you can’t sustain that. You gotta have a mentality where you can perform all year long with the same attitude. I think it’s just experience at that point.”

Boston Sports Journal: Karalis: Evan Fournier could be what Boston has been waiting for, on and off the court

I’ve said all season that the Celtics needed good health (haha, sure) and a veteran scorer off the bench to replace Gordon Hayward. Fournier is all that – not as all-around talented as GH, but still capable of going off like no one else on Boston’s second unit.

EVAN FOURNIER AS A CELTIC

Let’s hope last night’s outburst helps Fournier relax and get back to shooting as he did in Orlando.

Smart goes back to his strengths

When Marcus is bricking pull-up threes in transition, his game suffers, and so do the Celtics and their fans. The fact is, the more Smart shoots, the worse the outcome is. In losses, he averages 12.2 FGAs and 4.7 assists; in wins, those numbers are more balanced at 8.5 and 6.5.

Last night was one of Smart’s best recent games: he shot 3 of 6 for just 6 points, but dished out 10 assists. He didn’t force it. And he made the impact we expect on defense, with 3 steals and a block.

Refreshing to see the Celtics hunt the best shot for a full game. They racked up 35 assists, seldom settled for the early-shot-clock three, and mostly avoided isolation sets. Their willingness to share the ball is evident in the box score, where Rob, Smart and Kemba each had at least 8 assists.

As a result, Boston shot 52.3% overall and 41.5% from the arc, and converted several gorgeous outlet passes into 16 fast-break points.

At first, Romeo Langford was listed as available to play on Friday. Then he was unlisted.

“Romeo is just not ready to play,” Stevens said. “Even (Thursday), we did a little film thing with the team and he played some 5-on-5 up and down, and he doesn’t feel ready, he doesn’t feel comfortable. I think we’re days, not weeks away.”

Langford hasn’t played a single minute this season, missing the first 48 games. He had been recovering from offseason wrist surgery and looked to make his debut after the All-Star break. But he was out for an extended period because of health and safety protocols, which the league uses for any coronavirus-related issues.

MassLive: Celtics’ Romeo Langford downgraded to out for Friday game vs. Houston: ‘We’re days, not weeks away’

Meanwhile, Jaylen had to leave Friday’s game. He might be fine for Sunday’s game against Charlotte, but we’ll see. The Celts are usually extra cautious on any injury.

Brown suffered a left knee contusion when he attempted to get a loose ball on offense. He limped off the court, went directly to the locker room, and was immediately ruled out for the remainder of the game. […]

“Jaylen, I was told that he wasn’t going to come back, but he was OK,” Stevens told reporters.

Speaking of Charlotte, all you can do is shake your head.

Although the injury didn’t appear severe, who knows? With his injury history, no one would be surprised if Gordo can’t go tomorrow in his first visit to Boston since bolting the Celtics. But with Terry Rozier and Brad Wanamaker also on Charlotte, expect an interesting night in the Garden.

Boston.com: ‘I can’t say enough good things about Isaiah’: Brad Stevens happy for Isaiah Thomas and his deal with Pelicans