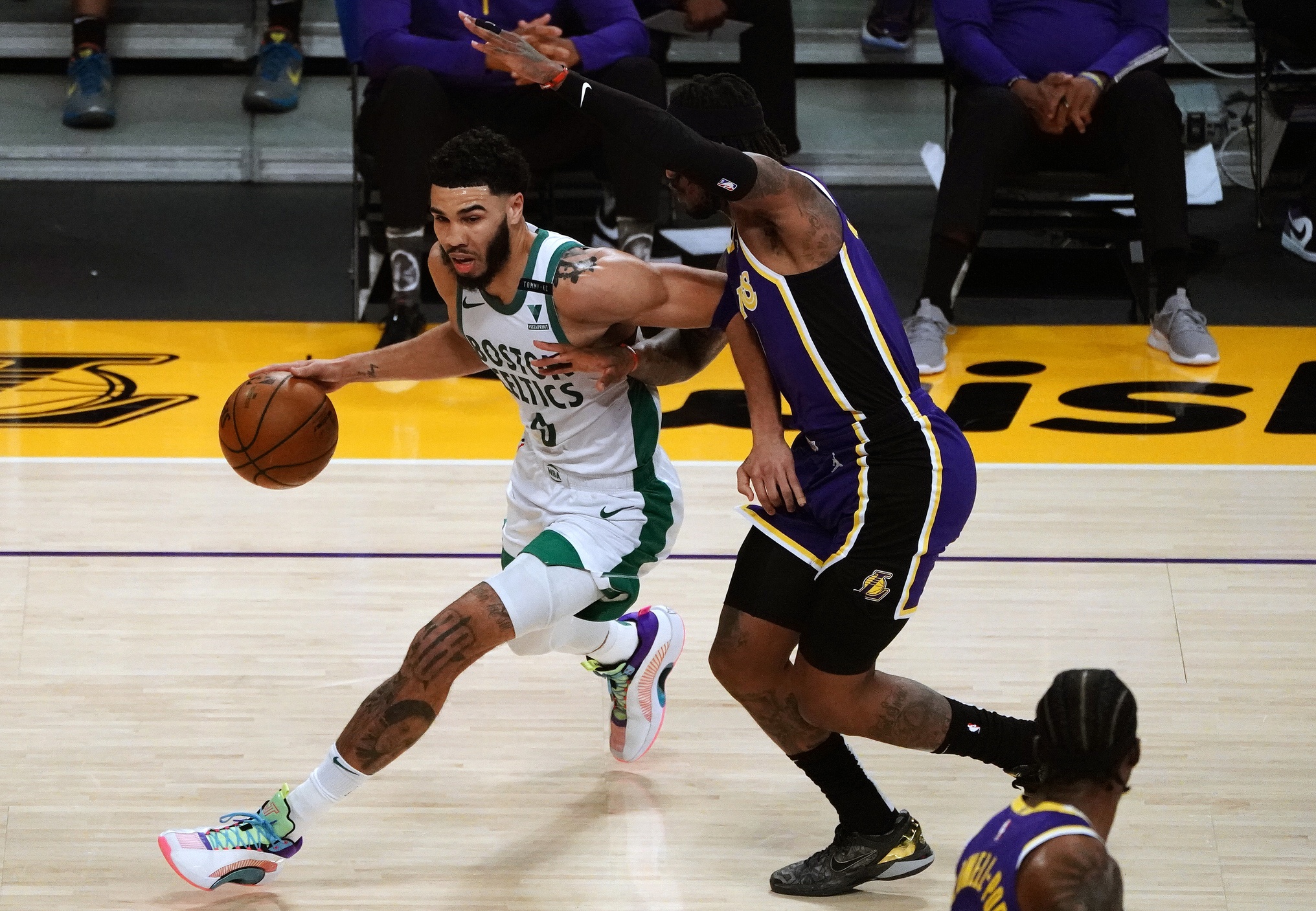 Three games, three wins and a whole lot of confidence. Boston’s on a five-game winning streak, including seven of its last eight games. That’s boosted the Celtics up the Eastern Conference standings, currently tied for fourth with the Hornets.

“Obviously, we have a lot to improve on,” Brad Stevens said after Thursday’s victory. “It’s a seven-point game in the third and we went on that huge run. Start of the fourth was great. The bench came in and did a lot of good things and Jaylen just was unreal tonight. We still have a lot to improve on, but that run is what separated the game and thank goodness we had all of it because it sure got exciting at the end.”

Dating back to the March 25 trade deadline, the Celtics own a defensive rating that would rank third over the entire regular season.

“You know, what we’re known for,” said Jayson Tatum. “We’ll make shots and things like that, but we got to get back to defending at a high level like we have in these last couple years. We want to continue to compete.”

The success hasn’t come against a pile of cupcakes. The Celtics have run into five of the top-10 offenses during this stretch.

The C’s are 9-3 over their last twelve games–a better stretch than the 8-3 run that opened the season.

Granted, there’s not a whole lot of time left to rise above the fourth seed—Milwaukee holds a 4-1/2 game advantage with only 17 games to go—but right now the Celtics’ play is not about trying to secure a top seed, and indeed, with almost no home court advantage to speak of, there’s not much to be gained by holding the higher seed against a team that’s peaking at the right time.

Last night’s game against the Lakers has me musing on the championship the team earned last year.

That championship still rankles, but the aftermath has seen Lakers fans having to do some of the same things that they once laughed at Celtics fans for doing.

For instance, Lakers fans of a certain sort derided Celtics fans for years about the championships that the C’s won back when the NBA consisted of ‘plumbers and truck drivers’. But in order for Lakers fans to claim an equal number of championships, they must tout titles that were won when the league truly was in its infancy. And, as I’ve had occasion to mention before, the Lakers themselves appear to be embarrassed by those titles—assigning them second-class status in the Staples Center and failing to retire the numbers of even Hall-of-Fame caliber players from those teams.

And now that both AD and LeBron are injured, there’s a real possibility that the 2021 Lakers will end up resembling the 2009 Celtics, who were hampered in their pursuit of a second championship by injuries. So if the Lakers fail to follow their 2020 title with further success, expect Lakers fans to start using the same reasoning that they once laughed at Celtics fans for using.

Page 2: Where Tatum called Perk after Perk called out Tatum

If you’re like me, you probably saw this tweet from Perk a few days ago and kind of rolled your eyes and expressed sentiments similar to Gavin:

Called Jayson Tatum out about giving more and he didn’t get all sensitive and he heard me and responded like a true professional supposed to and had the best game of his young career…finishing with 53 spicy and 10 boards with W! Carry the hell on…

Damn Perk I think Tatum scored more tonight than you did in your entire career.

Tremendous work, big guy! Why don’t you yell at the sun and tell it to come up?

Well it turns out, Perk wasn’t just taking credit for the inevitable in order to boost his career as an analyst:

Following the Celtics’ win over the Trail Blazers Tuesday night, Perkins revealed that Tatum reached out to him after Perkins criticized Tatum’s body language during a loss to the 76ers earlier in April. In his conversation with Tatum, Perkins said he told Tatum how high he thinks the ceiling is for him.

It’s true that the C’s have only won a single title over the past 35 years—but it is also true that during that period they have been more snakebit by misfortune than any other team.

And yes, I’m willing to defend that assertion against all comers. Unless and until you can demonstrate that your team had TWO amazing players DROP DEAD, you are, at best, competing for second place in the misfortune sweepstakes.

Sure, there are plenty of teams that have had worse records over that era, but there’s a gigantic difference between bad luck and bad management.

And a reflection of the team’s championship heritage is its continuity. It is something of an exaggeration to say that wearing that uniform is different than wearing any other uniform in the league (and that’s apart from the fact that the C’s are about the only team in the league that has never had an ugly home or road uniform), but it is only an exaggeration. You’ve got guys like Paul Pierce and Kendrick Perkins giving advice to Tatum and Kevin Garnett giving advice to Jaylen Brown. Tommy Heinsohn did more than just rail against refs on television–he was a mentor to players on the team. The team’s GM is a former player who won a pair of titles. If you’re a young player on the Celtics, you can—as Isaac Newton said—stand on the shoulders of giants, if you wish.

“I love the fact that Jayson Tatum picked up the phone and called Perk. That’s good that they have that connection,” Ainge said in an interview on 98.5 The Sports Hub’s “Toucher and Rich” Thursday. “I know that Perk only cares for Jayson’s success. I think that there’s players available (to talk), and I also know that players in our league now, they’re listening to other players.”

“I think Jayson is wise and so is Jaylen (Brown). They’re wise beyond their years in my opinion,” Ainge later said. “Both those guys know who’s blowing smoke and who is honest and good feedback. So, I’m certainly not dismissing the feedback that players receive, but I’m also not giving them all the credit for the players’ play because Jayson Tatum has been on a roll for four years and he’s had some downtimes.”

And that last quote there, that’s why I’ve been optimistic about this team all season long.

These guys have done a lot of growing up over the past several years. They may not yet be where they need to be to win it all in terms of mental toughness, but they are very smart and very motivated guys. Selling them short in a season that has been this messed up, when one of them is dealing with long-term effects of a serious illness—? That’s just plain stupid.

If you thought this team needed to be blown up because they struggled while dealing with more COVID related fallout than any other team in the league, while they struggled to find a rhythm with player availability changing almost nightly… If you thought that Stevens had ‘lost the team’ and that Ainge needed to be fired because he didn’t assemble a roster that could secure a top seed with three or more of its best players unavailable, inconsistently available, under minutes restrictions or sick or injured… If you thought that these guys basically forgot how to play quality basketball…

Well—you’re lucky that I’m too old and too tired to spend the effort telling you how foolish you’ve been.

The Athletic: Celtics on a five-game win streak: A look at five important trends for each win

Boston.com: Brad Stevens acknowledges the media ‘has a role to play’ in success of the NBA