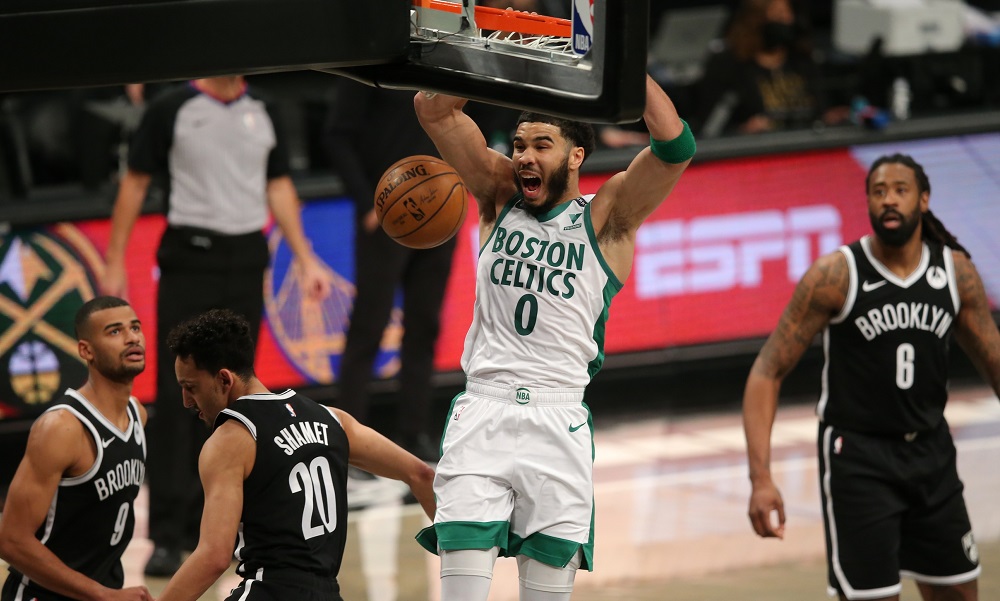 The Celtics aren’t having their best season, obviously, but there’s a certain category where they easily lead the NBA: Clutch games played. Those are games where the score is within 5 points in the final 5 minutes. The Cs have played 39 such contests (unfortunately, winning just 16 and losing 23), comfortably ahead of – what a coincidence – the Nets, who are second with 35 clutch games under their belt (and a 25-10 record).

The takeaway is that seldom is a Celtics game over just because one team takes a big lead. Most of those times, the Celts will either make a comeback or blow a lead; it will be a nail-biter in the end; and they will usually lose. Just like last night in Brooklyn.

Down 103-98, the Celtics had two bad turnovers — Marcus Smart threw a no-look pass to nobody and Tatum lost the ball out of bounds — curtailing chances to get with one possession. They didn’t get there until there were 3.1 seconds left. After that Kyrie Irving made two free throws to seal the result.

On Thursday, the Celtics had the advantage of facing a team on the second night of a back-to-back. Last night, the Cs were in that situation. And shorthanded. (Yes, the Nets were without Kevin Durant and James Harden, but they’re better equipped to deal with it.)

The difference Friday was the Nets’ depth and veteran bench outplayed the Celtics, who are still trying to fill significant roles with youngsters and players who aren’t equipped for the big moments. Stevens doesn’t have many options but how many times can you play lineups with Semi Ojeleye, Romeo Langford and Williams on the floor and expect a positive outcome?

Stevens is crossing his fingers that some of these combinations work but he’s going to have to decide on consistent rotations once the Celtics get healthy. Jaylen Brown and Robert Williams again missed the game with injuries while Evan Fournier returned from a nine-game absence with the coronavirus and missed all seven shots.

It was a rough return for Fournier, who made two crucial errors in the final moments. First, on the play where Harris drilled a triple to raise the lead from 3 to 6, Fournier left him wide open by unnecessarily double-teaming on the ball. Then Evan was out of position on an offensive possession; Smart, swinging the ball against the rotating defense, expected him to be in the corner. The pass-to-no-one was both embarrassing and costly.

The Celtics’ leaky trend of turnovers contributed to the Nets’ strength Friday: the transition game. Brooklyn had a startling 32-0 edge in fast-break points, using all of those advantages in a 109-104 Celtics loss Friday at Barclays Center. The C’s, for their part, coughed up 19 turnovers to aid the Nets.

That fast-break margin was actually 32-3, corrected in the official box score after the game. Still totally one-sided, but at least not the goose egg.

Upon a closer look, the turnovers were bad but fairly even. While Boston’s 19 giveaways led to 20 Brooklyn points, the Nets committed 11 turnovers that allowed 17 Celtics points.

Another Celtics comeback falls short. This wasn’t the April Celtics in Brooklyn. This was the February/March tired/lazy Celtics that looked horrible for long stretches, furiously came back, and then fell short. This was a reminder of what was, not of what’s to come.

Unfortunately, the Celtics held Kyrie in check this game but couldn’t capitalize. The man who hit the Celtics with 40 and 37 in their previous meetings this season was limited to 15 points on 4 of 19 shooting (0 of 6 from the arc). The Celtics went 0-3 vs. Brooklyn this season, and never faced all three of Kyrie, Harden and Durant in the same game. It would not be ideal to meet them all in the postseason.

With that said, it’s difficult to properly judge the Celtics when they’ve still not had a fully healthy roster for even one game this season. We can only cling to the hope that they will be whole before the playoffs arrive.

Boston Sports Journal: Karalis: Turnovers will be Boston’s demise if they don’t fix the problem now

Despite the loss, the Celtics did gain a split of their tough Suns/Nets back-to-back. Maybe that’s why, even at this point in a frustrating season, I see optimism on my Twitter timeline (yes, it’s true!).

Many fans still believe that if the Celtics do manage to get healthy, they can be a threat in the playoffs. In that spirit, here are some positives from last night.

Tatum started hot and held the Celtics afloat as they tried to rally in the fourth quarter. Without his heroics, the Nets might have completed their blowout.

Pritchard’s shooting helped keep the Celtics in this game. This season he has not only shown that he can make big shots, but that he can do it from well behind the 3-point line. The arc is 22 feet from the hoop at the corners and 23 feet, 9 inches elsewhere. Pritchard’s 3-pointers officially included three 25-footers, a 27-footer, and a big 31-footer that sparked the late comeback.

“Well, I think I had it before I came into the pros,” Pritchard said. “I think I had that ability to shoot from deep. For me, it’s just guys have to come out farther to contest, which opens up lanes, driving, if they come out that far. But it’s harder to contest that farther out. So that’s why I usually go to that spot.”

Globe: Celtics make spirited comeback, but it’s not enough to beat Nets, and other observations

As for Nesmith, his impact is a bit more understated. He played 17 minutes for the C’s and provided them with some key energy that helped to spark them at various points.

On the day, Nesmith logged 5 points, 8 rebounds, 2 assists, and a block. He shot just 2-of-5 from the field, but his rebounding effort was much-needed and the shots that he did make were longer ones, a good sign for his development.

One more hopeful item: Because Miami lost last night, the Celtics stayed in sixth place, one game ahead of the Heat. They also remain one game out of fourth place. Finishing in sixth or above will avoid the potentially dangerous play-in tournament. The Celts reportedly have one of the most favorable schedules remaining, as eight of their final 12 games will be against teams under .500.

And, finally… Let’s end on a good note

Not yet at Dame Lillard range, but deep…and clutch.