Major League Baseball’s most dynamic history can be found in the geography of franchise domination. Nothing illustrates this better than the New York Yankees with an historic 40 World Series appearances (going 27-13), four of those since 2000.

Like it or not, it seems the words “championship” and “Yankees” have been seamlessly joined in the game’s imagination for decades.

The St. Louis Cardinals appeared in the World Series 19 times in their franchise history (going 11-8), with four of those appearances happening since 2004. The Boston Red Sox made it to the Series 14 times (9-5), also making four appearances since 2004 (and going 4-0 in those Series).

Teams that can build and sustain championship-level organizations master three critical components: they smartly draft and expertly develop extraordinary talent; they use free agency and trades to add key pieces rather than to “create” a team; and they fully understand the current trends in the game in order to leverage value whenever the opportunity arises.

In the past several years, we’ve seen the Los Angeles Dodgers and San Diego Padres emerge as premier-league organizations, and teams like the Houston Astros, the Atlanta Braves, and the Chicago White Sox retool to compete at the same level.

Through sheer front office expertise, the Tampa Bay Rays (with 34% of the Yankees’ $198 million budget) and the Oakland A’s (with 43% of the Yankee budget) have sustained an extraordinarily high level of performance for years.

Predicting baseball dominance may be an exercise in futility, but there is a tectonic geographical shift in the works that could award premier league-status to virtually all of the game’s West Coast teams from both Leagues for decades to come.

MLB’s West Coast line-up of the Seattle Mariners, San Francisco Giants, Oakland A’s, LA Dodgers, LA Angels, and San Diego Padres are (almost all) poised to grab championship status over the next several years if they play their cards (and fiscal resources) intelligently.

The Dodgers and Padres have set up their organizations for sustainable long-term success and they will not be fading from post season contention for a very long time.

In Baseball America’s (subscription recommended) 2021 MLB organizational (i.e., prospect) rankings, the Pads are 6th out of all 30 teams, the Dodgers 9th.

Emerging from the shadows of being buried in their respective Western Divisions for years, the Giants and Mariners are today two of the most potentially potent emerging franchises in the game.

Their Baseball America organizational rankings have accelerated the past several seasons (Seattle is now #2 behind Tampa, San Francisco is 15th overall) and their formerly old timey front offices have been dramatically improved and expanded.

Some of the talented Mariner prospects we’ll see include RHP Logan Gilbert and Emerson Hancock, OF Jarred Kelenic and Julio Rodriguez, and LHP Brandon Williamson. 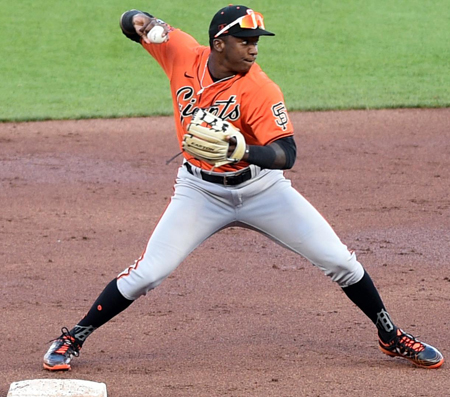 Financially the Giants are among MLB’s biggest dogs, named the 5th most valuable team by Forbes.com at $3.175 billion in 2021. Seattle is struggling along with a 2021 franchise value of only $1.63 billion, #16 overall.

So to sum up: Seattle and San Francisco are developing high level baseball talent; they have smart front offices; there continues to be dump-trucks full of media money coming in to both teams, as well as money from shared MLB proprietary properties, and from individual stadium ticket and marketing revenues.

Add to that, San Francisco’s Oracle Park and Seattle’s Safeco Field are two of the most beautifully designed and located ballparks in baseball, both easily making my personal top five (along with Pittsburgh’s PNC Park, Chicago’s Wrigley Field, and San Diego’s Petco Park).

My expertly laid out MLB West Coast Power Theory does have one obvious laggard: one team that threatens to drag this otherwise brilliant prognostication into the nearest flaming dumpster– the Los Angeles Angels. Of Anaheim.

That would be the same team that has squandered arguably the two most talented and dynamic players of the 21st century: OF Mike Trout and OF/P Shohei Ohtani. And the team that has the 9th highest Forbes.com value in 2021 at $2.025 billion.

But over the years, team owner Arte Moreno and a conga line of front office sycophants found endless ways to criminally misspend millions in player salary contracts, make an impressively long list of ill-considered trades, and forget that player development might be something they should occasionally look into.

Add to that, the Angels also have the worst (by far), most desolate, most poorly designed excuse for a ballpark in the history of baseball: the embarrassing Angel Stadium.

The place a lifetime of bad Angel teams have called home is an old cereal bowl surrounded by an unending asphalt hell of parking places.

To attend this mess, you’re forced to walk into a dreary mausoleum underneath a massively cartoonish Angel’s baseball cap poised over the entrance, which is humiliating.

The dicey concession stands passed their “use by” dates years ago, and being forced to sit in completely unsheltered stadium seats under the relentless desert sun is a test of human will and survival.

Other than that, it’s a dandy place to view our grand old game.

So, can the Angels turn their personal Titanic around and join the West Coast MLB Explosion that will happen over the next three years? Probably not, because that would mean having to trade either Trout or Ohtani, and the current ownership won’t let go of their two favorite deck chairs no matter how high the water gets.

No matter. When the San Francisco Giants and Seattle Mariners join the Dodgers, Padres, and A’s as top echelon teams, the game’s power needle will still dramatically jump to the west, and what a thrill that will be to see.