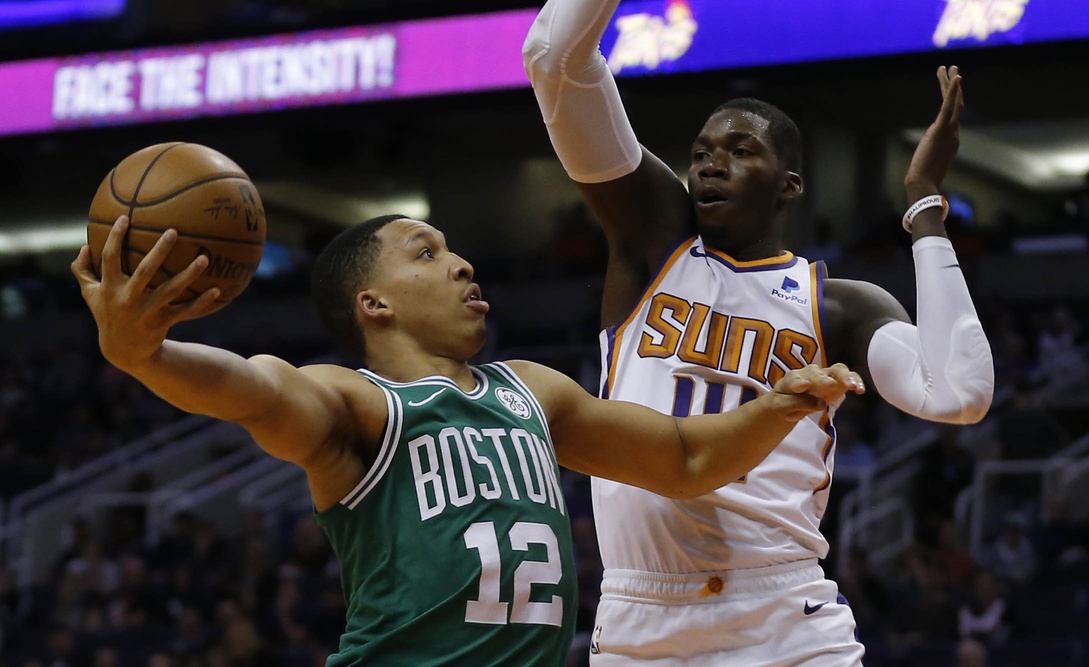 As you may have guessed, there is a strong chance that this one gets a wee bit weird. But following up on our Rapid Recap of the Boston Celtics’ 99-85 win against the Phoenix Suns, let’s get granular:

Brad Wanamaker is pretty legit.
Is he a starter? Definitely not. A go-to reserve guard? Well, lately, yeah. Wanamaker has been that.

Wanamaker is winning this game for the Celtics. He's been excellent tonight. 10 points, 5 assists and 4 steals.

(He ultimately got another dime.)

While it’s unclear how valuable Wanamaker would be in a playoff situation, there’s no doubt he’s needed right now by a slightly shorthanded Cs squad, and is making the most of his opportunities with well-rounded play.

The Celtics’ guard defense was tremendous.
Holding Devin Booker to just 20 points is no easy feat. The dude is a consummate scorer and no longer delivering the empty calories of his past games. Being surrounded by legitimate NBA players (Baynes, Oubre, Dario Saric, Ricky Rubio, etc.) has helped him moderate his weaknesses.

But hold him to 20 points the Celtics did, not by making him take bad shots but strangling his ability to get in any position where he could even think about chucking. With Rubio out due to back spasms, the Suns’ best non-Booker guard was Tyler Johnson. That just wasn’t gonna cut it offensively, and the Cs vicegripped the remaining guards to the tune of 6 points for Johnson, 3 for the 87-year-old Jevon Carter and 0 for the enigmatic prospect Elie Okobo. Wings like Oubre, Saric and rookie Cam Johnson had more luck (the latter’s coming in garbage time), but it didn’t matter.

With Marcus Smart having graduated to a truly consistent offensive role, Williams seems poised to inherit his mantle as the designated STATS DO NOT MATTER guy for the Celtics.

He’s definitely not yet ready to fill up the scoring column of the box, but when he’s making decisive blocks such as the one pictured above and improving Boston +17 when he’s on the floor (well ahead of all players on both sides last night, except for Kemba Walker’s +22), there’s clear evidence of his value as a reserve facilitator, playmaker and multiple-position defender. On the advanced side of things he looks even better, boasting a 7.8 net rating and a defensive rating of just 95.6 points allowed per 100 possessions (the latter good for 15th in the league, per NBA.com).

SMARF, elite scorer
This is going to keep being a takeaway/rational thought until it stops happening in a game that I watch and/or cover. (I didn’t see the Sactown game, and as such the alleged “poor Smart shooting performance” does not exist to me.) If not for the sprain last night limiting him to 29 minutes, I totally believe Smart would’ve improved on his 17 points and maybe juked his efficiency, the only negative of his offensive performance (5-12, 41.7%).

Kelly Oubre is still a tryhard.
Not too long ago, Kelly Oubre was catalyst for one of the key incidents in the longstanding beef between the Boston Celtics and Washington Wizards in the 16-17 season, when he unnecessarily shoved gangly-ass Kelly Olynyk in an East Semifinals game. Back then, he was a tryhard—wanting badly to fit in and doing a dumb physical thing because he was a mediocre player. Now, he is by no means mediocre—in fact he’s quite good; a big reason for Phoenix’s surprise early success—but he’s still a tryhard:

Kelly Oubre doing push-ups in the middle of a game will never get old. #Suns #RisePHX pic.twitter.com/ZkPCcJoDgz

Not from the same game (looked for it, couldn’t find it; the one above was a couple of nights ago), but he did it last night after taking a Celtics charge. Apparently he’s doing this as a Regular Thing, and…man, what a dork. If that’s your flex, then it isn’t informed by real confidence.

Good to see Kelly Oubre is unlikeable no matter what jersey he’s wearing.

(Brief sidebar to close this out on the Cs-Wiz beef: I’ll never get over 7-footer Marcin Gortat effectively telling reporters he was scared of 6’1″ Avery Bradley saying to him, “You come near me, I’ma fuck you up.” Or a well-known Wizards blog writing that Al Horford, of all people, was a sneakily dirty player. Lord almighty that was a strange time.)