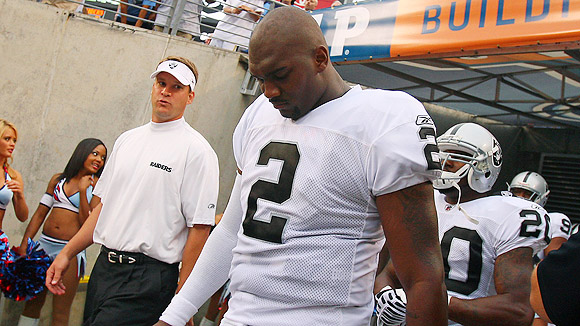 This article is written by Raiders Reporter Elias Trejo, Featured Columnist at BleacherReport.com. His opinion is not necessarily in agreement with this site’s editors. But, we feel it’s an intriguing opinion ona player who has been blamed repeatedly for the failings of a franchise.

When it comes to the Raiders QB competition you keep hearing that Bruce Gradkowski has the heart to be the starting QB. You also hear that JaMarcus Russell lacks heart, and the work ethic, and the ability to read defenses.

Sometimes I wonder what the definition of having heart really means, and why people like to say that Russell lacks heart. From what I have seen the last three years, Russell has shown that he has more heart than he is given credit for.

Before Russell became the full time starter in 2008, the Raiders had a five-year streak of losing 11 games or more. They had no direction on the offensive side of the ball, and Russell was coming into an empty offense with no O-line.

Darren McFadden was drafted to help Russell in 2008. Russell was also given a big-play receiver in Javon Walker, and a solid tackle in Kwame Harris. In 2009 the Raiders drafted raw talent Darrius Heyward-Bey, and the need for an O-line was ignored once again.

The first two seasons of his career were slow, but Russell turned it on during the last half of his second season. He entered his third season with a heavy heart after losing two father figures during the offseason.

It almost appeared as if the frustration built up in the last seven years was all let out on Russell. He was booed and chastised every time he made a bad throw or took a sack. Fans cheered once Russell was benched.

So where is his heart? Let’s look at it from this point of view for a second.

Every time Russell stepped in for the injured starter he was booed in his own stadium. It looked as if the O-line gave up, and he continued to take a beating, getting hit from all directions. The boos continued to rain down on him, but he kept getting up.

All the haters wouldn’t be able to withstand what Russell has endured during his young career. The man kept rising from the ground, though a whole nation wished he’d stay down.

Perhaps Russell’s defining moment was in Denver. Frye went down with a head injury, and Russell was sent into the game. For the first time in a while, the crowd cheered as Russel stepped into the game—unfortunately they were Denver fans.

He later led the Raiders to victory against the hated division rival and helped ruin their playoffs hopes. The Bronco fans who cheered him coming in now wished he would of stayed on the bench. The haters could only do what they do best—hate and give no credit.

So before you say Russell has no heart again, remember every time he was knocked down, he got back up. You could say last season was him getting knocked down, but just as he always does, he will get back up.