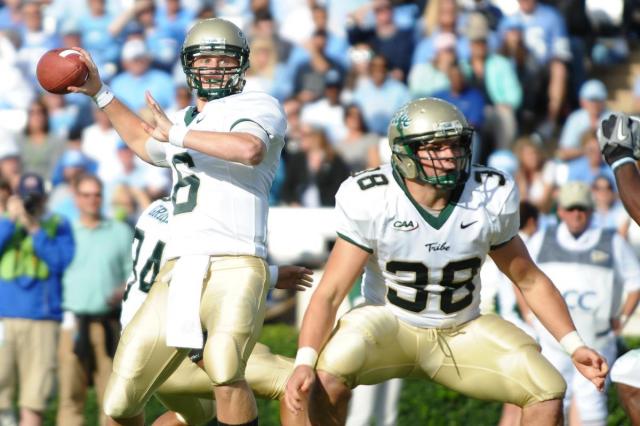 If you’re like most college football fans, the FCS isn’t your primary concern, as well maybe it shouldn’t be. Their games aren’t consistently televised, the talent isn’t near SEC or ACC level, and they don’t feature future first or second rounders, usually.

However, among the FCS, the general consensus is that the CAA conference is the best of the bunch. Not only the best in the FCS, but arguably the 9th or 10th best conference in Division I (including FBS). This year, the CAA four or five teams with at least a handful of NFL potential prospects, and in a wide open league, it should be worth watching if possible.

CAA Season Preview
Last year, the Delaware Blue Hens were the face of the CAA, going to the FCS National Championship and eventually blowing a lead to lose to Eastern Washington. The Big Sky representative Eastern Washington also beat the CAA’s Villanova. However, both Delaware and Villanova lost a lot from their respective teams. Delaware lost Pat Devlin at QB, two defensive leaders, and the entire secondary, while Villanova lost Chris Whitney at QB, Matt Szcur as a do everything player, and a host of defensive playmakers).

As of now, the favorite in the conference in my book is William & Mary. Lead by quarterback Michael Paulus and running back Jonathan Grimes, they have the firepower on offense and enough talent on defense to lead the race in a wide open CAA conference. Richmond lost a lot from last year in terms of NFL Draft prospects, but Aaron Corp (former USC transfer) should be healthy and if he lives up to his high school recruting potential, they could be the favorite. Delaware has the offensive youth at running back with Andrew Pierce and young  talent at receiver, linebacker, defensive end and safety,they’ll need to find a new feature quarterback and have leaders step up. James Madison has talent on the offensive and defensive lines, and they have maybe the most draft prospects in the league.

It should be wide open, but I’ll take William &Mary for now, with three or four others right in the mix by season’s end.

Final Note on Terrelle Pryor
Just go. Go to the NFL now. Teams still want him, teams will give up a 4th or 5th round pick for him in the Supplemental Draft. His other option is to take the Marvin Austin approach: workout, stay in shape, attempt to improve, and then once the All-Star games come around, generate some buzz. Still, quarterbacks (or players changing position) are near impossible to let them take a year off and still feel they can contribute.

The only reason I could see for him wanting to not declare for the NFL Supplemental draft is either a.) he’s hyping himself up as a much better prospect in his eyes, or b.) he decides to work this entire football season on his receiver skills. That would should a lot of class and character if he did that, but I’m not expecting it. I’d still place even money at least that he ends up in the Supplemental Draft, and sadly, I might place the same on his chance of flopping out of the league. Lots of pressure, lots of negativity, lots doubt.
It’s his choice whether to let it take him down or use it.

Washaun Ealey Games to Watch (Via Matt Elder, @matthewcelder)
Check out this link from Matt Elder about the games to watch for transferring running back Washaun Ealey this upcoming season:
http://www.examiner.com/small-school-college-football-in-national/ex-uga-rb-washaun-ealey-transfers-to-jacksonville-state

Quick Rant: Jimmy Clausen STILL Can Be a Starter
I’ll be honest: I really liked Jimmy Clausen as a prospect. Thought he was Top 10, 15 good. And based on the film, many could argue the same. He had taken his beatings and seemingly come out the other side with the confidence in the pocket. He wasn’t hesitant as a passer. His athleticism was average but likely sufficient. He had the arm and the touch to beat teams down the field. Really, the main knock on him other than he rarely wowed in games was that he wasn’t a leader. With that note, I ALWAYS take precaution of quarterback non-leaders.

But, when I talked with Sam Young, former Notre Dame left tackle, and asked him about Jimmy Clausen, he talked about how Jimmy did have a bit of an ego when he came in to the university. Clausen was a highly touted rookie with known ego problems, but after a season of brutality in getting hit, he really matured over his college career and by his careers end, he was one of the more humble, leader-driven players on the team, so said Sam Young.

Jimmy Clausen, in short, got the short end of the stick in my opinion. He played on an injury ravaged team that didn’t leave him with many weapons nor protection, and he struggled as he battled with Matt Moore as a rookie. Now, just a year after the team took him with their first pick in the draft, the Panthers selected Cam Newton to be the new face of the franchise at quarterback. What does that leave for Jimmy Clausen? Ideally, a trade.

And teams could use him. In my opinion, Seattle, Miami, and Washington all make a lot of sense for Clausen. All three have a franchise left tackle in the fold. All three have quarterback question marks, and all three (if Santana Moss re-signs) have both a deep threat and a bigger bodied intermidate threat that Clausen needs to be successful. The best part? You can get a prospect who I felt was a Top 15 talent just a year ago for probably a 4th or 5th round pick. Carolina doesn’t need/want him now, and a fresh start could be just what the doctor ordered, as I still see NFL starter written all over him.