Like/Dislike: Those pesky Flyers do it again in 4-3 OT win over Detroit 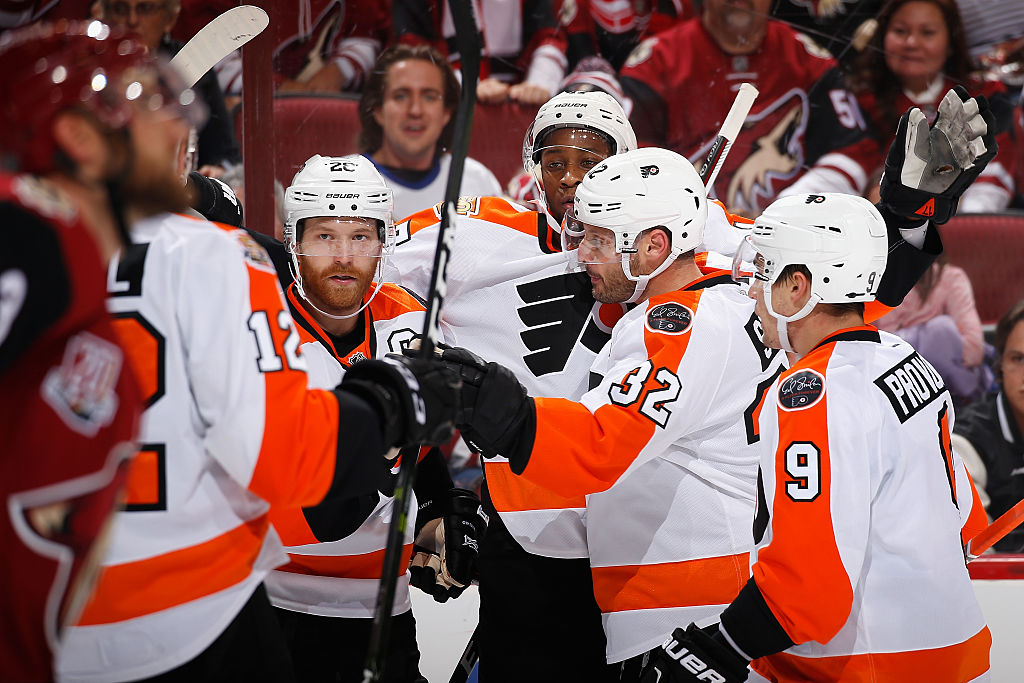 Like/Dislike: Those pesky Flyers do it again in 4-3 OT win over Detroit

The Like/Dislike recap of each game is pretty simple. What did we like? What did we dislike? Every game has its ups and downs, it’s impressive moments and woeful ones. This will be our list – both good and bad.

The Flyers had yet another two-goal deficit to overcome, and once again, they did so, evening the score at 2-2 before eventually falling 3-2 then tying it again and winning in overtime. Phew!

Let’s get into what stood out:

That overtime was all Detroit… but one rush by Claude Giroux and Jake Voracek was all they needed as No. 93 buried the 2-on-1 pass from the captain. It also signified the 10th game in a row that Giroux had a point. What a game!

Seriously, those purple threads they wear during warmups are pretty awesome. I wouldn’t mind seeing them worn during games, but that’ll never happen. Also, I love the Hockey Fights Cancer month-long promotion.

May as well skip the first 20 minutes, right? The Flyers have been outscored, 13-4, in the first period this season. Thursday night was no different as Detroit lit the lamp twice, once off a bad deflection with the other being a shot Michal Neuvirth should have stopped. The Flyers have the ability of coming back in these situations, but when playing in the first game of a back-to-back, you don’t want to find yourself down that early. This is a concerning trend that has to stop ASAP.

It’s been one heck of a bumpy start for the netminder this season. Neuvirth has looked nothing like his 2015-16 self. He’s been caught out of position numerous times this season, including on the game’s second goal versus Detroit, and has allowed a few goals in succession a handful of times as well. The Flyers gave him a chance to find his rhythm with his second straight start. It’s safe to say he didn’t find said rhythm. Granted, the following DISLIKE had a lot to do with his performance…

DISLIKE: Turnovers, and lots of them

The Flyers may as well open a bakery with all the turnovers they served to the Red Wings, many of which coming in the defensive zone. The third goal was a direct result of a Radko Gudas mistake outside the blue line. The Red Wings, somehow, had more turnovers than the Flyers but it seemed as though the Flyers mistakes often times came at the worst possible times, including a Gudas errant clear up the middle that a Red Wing defender intercepted and fired on net late in the third.

Notice a trend, here? The Flyers once again played a much better second period than they did first. They netted their first goal of the game when Chris VandeVelde made a nifty move to beat Petr Mrazek. They now have outscored opponents, 20-15, in the second.

While he may have been trying to avoid it, this hit certainly doesn’t look good, and even more so since he is just coming off of a suspension. Hopefully the league doesn’t see anything wrong with it, but it’s certainly something that could draw a response because of the initial point of contact. I really think he was avoiding the hit, as many have pointed out on Twitter, but again, who knows with how the league sees things.

Brayden Schenn might be getting a call from NHL Player Safety… pic.twitter.com/gjLCHMM5G7

The signing of Lyubimov has paid early dividends for this team. The only thing he was missing was a point to his name. The rookie finally got his first NHL goal, and it was a calm, heady goal off of a rebound to tie the game at 2-2. Lyubimov has done everything right in eight games played, proving to be a valuable forechecker and a solid player along the boards. Hopefully this goal will calm him down a bit and allow for more production point-wise.

It’s the team motto. If it isn’t, it should be. The Flyers were 1:02 away from walking off as the loser… only to see a scrum going on in right in Mrazek’s crease with Mark Streit, of all people (he has 11 points in 11 games), all alone in the mess with the puck on his stick and eventually in the back of the net to even the score. Seriously, this team never goes away even if all else looks lost.