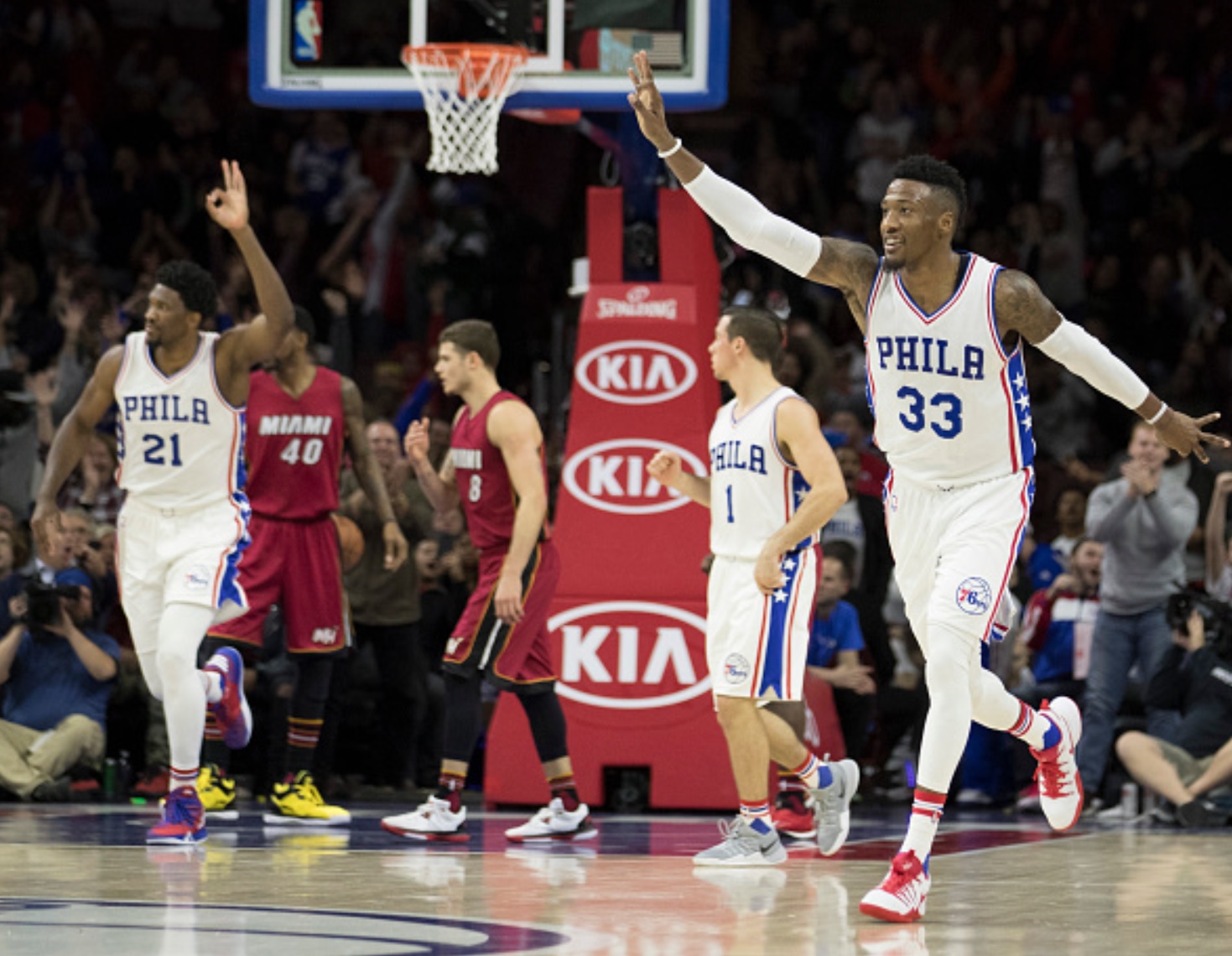 In a lot of ways, it has been a rough couple weeks for Robert Covington. Entering play Monday night against Miami, he had shot 4-31 from the field in his last 4 games, including 2-22 from behind the arc. As he missed his first 4 threes against the Heat, the boo birds from among the casual fans at the Wells Fargo Center rained down their disapproval.

Still, throughout the game, Covington continued to play excellent defense, helping hold Goran Dragic to a 4-13 night from the field, and worked hard on the offensive glass (5 of his 9 rebounds came on the offensive end). In the end, karma for all of RoCo’s persistence finally paid off.

With three minutes left and the Sixers holding a two-point lead, Covington swiped one of his 3 steals on the night, and then, at long last, finally connected on a three-pointer on the other end. It was a critical sequence as part of a 10-0 Sixers run toward the end of the game to help Philadelphia grab their fourth straight win at home, and their first 2-game winning streak since March 2015.

There were plenty of other contributors to Monday’s victory, most notably star rookie Joel Embiid, who went off for 22 points, 5 rebounds, and 3 blocks in 23 minutes. The Sixers continually fed JoJo down low in an effort to get Hassan Whiteside into foul trouble. Embiid was a big reason Whiteside had to sit a couple times on his way to collecting 5 personals, otherwise the Miami big man would have had an even bigger game than his career-high 32 points and 13 rebounds.

Embiid also went 1-2 from three, and his outside shot on the scouting report is forcing opponents to close out hard, opening up guard-like moves from Embiid like this one:

Questionable heading into the game due to illness, Gerald Henderson had his own version of the flu game, finishing with a season-high 19 points, including 3-3 from three. That production didn’t even include an amazing tip-in Henderson made while falling down at the third quarter buzzer, which was a split second late from counting.

The game represented a perfect mix of what the Sixers were aspiring toward coming into the season, the bright young star leading the way, with some of the veterans chipping in to stabilize things. The team looks like it has turned a corner, and they’ll look to keep things going Wednesday night against the Grizzlies.

Oilers win! Oilers win! This is not a drill! The Chicago Blackhawks rolled into town tonight, and the Oilers played like the 7-2 team from...