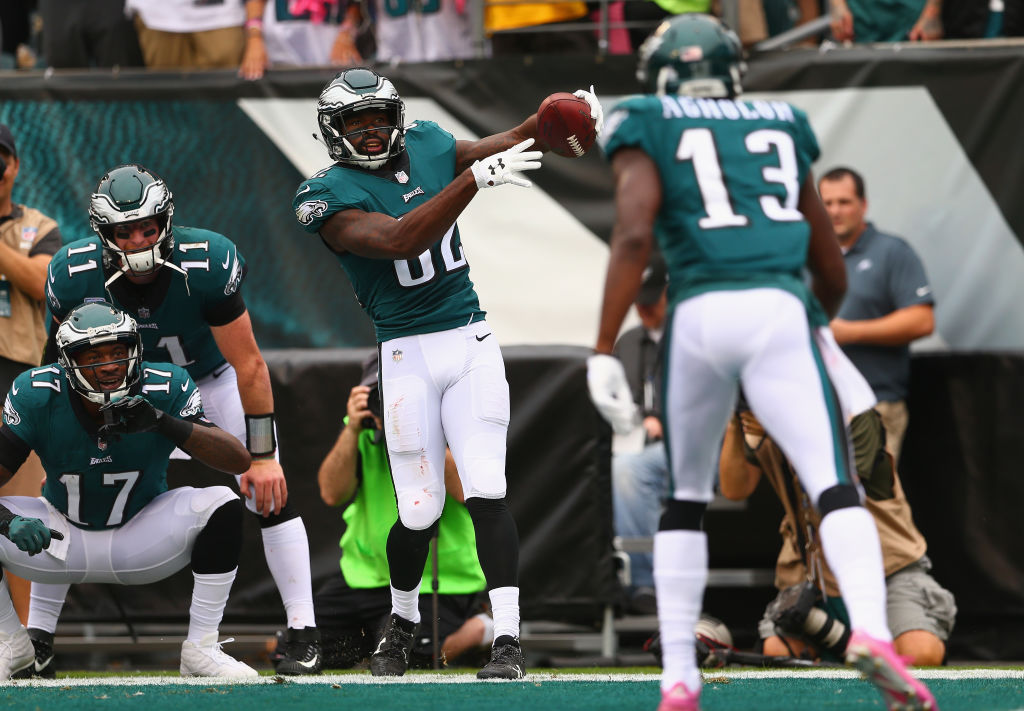 Unlike last week’s game against the Los Angeles Chargers, where the running game was the focal point of the Philadelphia Eagles’ offense. It was quarterback Carson Wentz and the passing game that helped the Eagles defeat the Arizona Cardinals 34-7.

The Eagles’ offense got the game started on the right foot, thanks to the defense getting a quick three and out. Wentz led the offense down the field on a 10-play drive, which featured wide receivers Alshon Jeffrey, Torrey Smith, and tight end Zach Ertz all getting involved.

The drive was capped off by a terrific throw from Wentz to backup tight end Trey Burton for a 15-yard touchdown, who was split out wide and matched up against safety Deone Bucannon.

After getting on the scoreboard first, the Eagles’ defense once again did their job and shut down the Cardinals’ offense, forcing them to punt.

However, things only managed to get worse for the Cardinals and better for the Eagles. On the ensuing punt, running back Kenjon Barner returned the ball 76 yards, giving the Eagles’ offense fantastic field position.

On their second drive of the game, the offense did not let Barner’s great return go to waste as Wentz found Ertz for an 11-yard touchdown.

The Eagles’ offense was clicking on all cylinders as they continued to pour on the points. With about less than a minute to go in the first quarter, the Wentz-Smith connection finally came up with a huge positive, resulting in a 64-yard touchdown.

Heading into the second quarter, the Eagles held a commanding 21-0 lead with all three phases of the team dominating. However, the Cardinals did not back down as Palmer put together 10-play, 75-yard scoring drive that ended with a 13-yard touchdown reception to speedy wideout John Brown.

After Arizona’s offense finally put points on the board, their defense stepped by forcing the Eagles to punt on back-to-back possessions. Later in the first half, the Eagles got the ball back and were driving up the field, only to be stopped as Wentz was intercepted by Cardinals cornerback Antoine Bethea in the end zone.

The second-year quarterback was trying to hit Ertz up the sideline but did not see Bethea coming over the top.

Despite Wentz’s mistake, the Eagles’ special teams once again did their job as cornerback Patrick Robinson blocked Arizona kicker Phil Dawson’s 51-yard field goal to end the first half.

To open up the third quarter, the Eagles continued the scoring as kicker Jake Elliott knocked through a 36-yard field goal to increase their lead to 24-7.’

A few minutes later, the Eagles put the ball in the air again as Wentz found wide receiver Nelson Agholor for a 72-yard touchdown reception.

Nelson's got the moves. #FlyEaglesFly pic.twitter.com/W6PnxiV7YK

Finally, in the fourth quarter, the Eagles milked the clock down to the two-minute warning, allowing Elliott to knock through his second field goal of the game.

Next week, the Eagles will be on the road as they take on the upstart Carolina Panthers led by quarterback Cam Newton. Kickoff is scheduled for 8:25 p.m. on Thursday night.