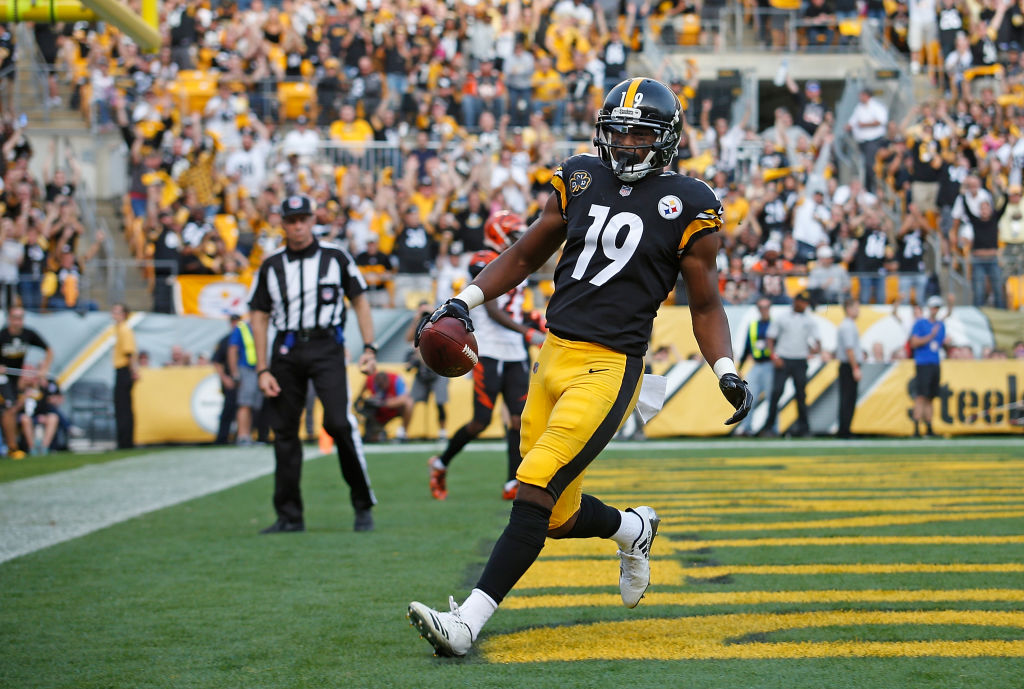 Each NFL season provides an opportunity for a new crop of playmakers to emerge out of relative obscurity and shine in the spotlight. Nearly every week — when the opportunity presents itself — a number of X-Factors step up and make an unexpected impact on the field. Their efforts often translate to a victory for their team.

Here are 10 NFL players most likely to make a name for themselves by coming through and delivering strong performances for their respective teams this week.

Steelers rookie receiver John “JuJu” Smith-Schuster wasted no time in endearing himself to teammates and fans. With 17 catches for 231 yards and three touchdowns so far this season, the 20-year-old has drawn praise for his play on the field, and deserves credit for demonstrating a level of professionalism beyond his years off of it.

Meanwhile, disgruntled teammate Martavis Bryant further alienated himself last Sunday night, with an ill-advised Instagram post aimed at Smith-Schuster. Bryant’s recent tantrums, though, have landed him in Mike Tomlin’s dog house, and on the bench for this weekend’s matchup in Detroit.

Bryant’s absence will almost certainly translate into more playing time for Smith-Schuster, who appears to be ready to go, despite beginning the week in concussion protocol. There’s every reason to believe the talented, young pass-catcher will take advantage of the opportunity this Sunday with a big game against a vulnerable Lions’ secondary.

In his fourth year in the league, Vikings linebacker Anthony Barr is rounding into form. At 6’4″ and 247 pounds, Barr has the size and strength scouts covet in a middle linebacker, but has been slow in delivering on the promise that got him drafted in the first round.

Better late than never for Minnesota, though, as more than once this season Barr has demonstrated the ability to completely take over a game on defense. He recorded eight tackles against the Saints in Week 1, nine against the Steelers in Week 2, and added 11 tackles and a sack against the Ravens last Sunday.

Barr cites playing with more confidence for his recent success—crediting the continued support from coaches and teammates for the improvement in his game. Going up against the Browns’ 25th-ranked rushing attack this Sunday, he’s primed for another big day of blowing up plays in the backfield and providing the physical presence on defense he was drafted for.

With Golden Tate’s availability for the Lions’ Week 8 game against the Steelers in jeopardy, Marvin Jones is the likely choice to step into the No. 1  wide receiver role for the team. Jones signed a five-year, $40 million deal with Detroit this offseason, and should expect an opportunity to earn his keep when the Lions host the Steelers on Sunday.

Jones has been fairly productive this season so far, with 20 catches for 280 yards (three touchdowns). His best performance of the season came in the team’s most recent game against the Saints, when he racked up 96 yards on six catches (one touchdown). He will now be relied upon more heavily in Tate’s absence, and appears set to shine on Sunday night as a result.

Rookie safety Eddie Jackson may have cemented himself as a key contributor in the Bears’ secondary with a record-breaking performance in Chicago’s win over Carolina last Sunday. The fourth-round draft pick out of Alabama made NFL history by scoring two defensive touchdowns for 75 yards or more in a single game.

Oddly enough, Jackson’s performance came exactly one year after he suffered a season-ending injury that ended his college career, and likely had a dramatic impact on when he was ultimately selected in the draft. That didn’t prevent him from earning NFC Player of the Week honors following last Sunday’s game.

That’s no small feat for a rookie, and neither is being named the starter at free safety, a position that generally takes 2-3 years to gain command of well enough to start at the NFL level. It all bodes well for the Bears, who look to have pulled off a major draft-day heist in securing  Jackson’s services with a fourth-round pick.

Now in his fifth season in the NFL, Kyle Van Noy is responding well to his recent change of scenery. The Patriots’ linebacker is thriving in his new environment, and, by all indications, New England may have once again found another playmaker rummaging through another team’s trash pile.

Van Noy, as many veteran players have during the Bill Belichick era, has had new life breathed into his career, responding well to the schemes, philosophy and system in New England. Coach Belichick has praised Van Noy in the past for his work ethic, versatility and willingness to contribute.

Second on the team in tackles with 49, and also recording 3.5 sacks, Van Noy’s having a career year and is clearly emerging as a leader on defense. With the loss of Dont’a Hightower, Van Noy will be asked to help fill the leadership void on defense. He’s been a consistent force all season, though, and should continue to have a major impact when the Chargers visit Foxborough this Sunday.

Give credit to his former team (the Vikings) for the idea of using Cordarrelle Patterson as a runner, as well as a return specialist. During his rookie season in Minnesota, Patterson ran the ball 12 times for 158 yards and three touchdowns. For reasons unknown, however, he would carry the ball only 19 more times during his final three seasons in Minnesota.

However, give credit to his new employer for recognizing a good opportunity. Though primarily brought in for his reputation as a dangerous return man, his 10 carries for 124 yards and two touchdowns already this season is surely a welcome bonus.

Averaging nearly 30 yards per return on kickoffs, and over 12 yards per rushing attempt, Patterson also has 11 receptions from the wide receiver position. His versatility makes him a valuable contributor, and he’s proven he can make plays when given the opportunity, which should lead to even more opportunities as the season progresses.

Injuries to star players have taken a serious toll around the league. In Kansas City, the loss of perennial Pro Bowl safety Eric Berry has had a visible effect on the Chiefs defense. But while the Chiefs’ list of the walking wounded grows, reinforcements are on the horizon. Slated to come off injured reserve this week, cornerback Steven Nelson would be a welcomed addition to a defense that is thin on playmakers following the loss of Berry.

Nelson is the perfect remedy. While players like Berry are irreplaceable, inserting playmakers elsewhere in the secondary can certainly soften the blow. Nelson promises to do just that by upgrading the slot corner position and adding depth on the outside. He’s no longer listed on the injury report, is expected to play in Week 8, and should get his share of opportunities when the Chiefs face off against the Broncos on Monday Night Football.

The Saints signed the speedy receiver off the Panthers’ practice squad in 2014. During his first two seasons seeing playing time with the Saints, Snead established himself as a solid possession guy, collecting 142 yards receiving and 7 touchdowns. A nice compliment to former No. 1 receiver Brandin Cooks, Snead proved to be a dependable, clutch target for quarterback Drew Brees.

Fast forward to 2017, when Cooks was shipped off to New England via trade during the offseason, with Snead having recently returned to the lineup against the Lions after being out all year. Though he had to serve a three-game suspension to start the season, he’s been nursing a hamstring injury since August.

He only played a handful of snaps in his first game back two weeks ago against Detroit, finishing with one catch for 11 yards. He sat out last week’s game against the Packers, but was a full participant in practice on Wednesday, and is expected to play this week when Mitchell Trubisky and the Bears come to town.  Look for Snead to return to form sooner than later, and perhaps even take on a larger role in a Saints offense that has lacked a true “X” receiver.

Marcus Maye has proven well worth the investment the Jets made when they took him with the 39th pick in this year’s draft. It’s not often when a rookie defensive back can come in and start right away at free safety, and is far less often when a player can step in and immediately perform at a high level.  Former Gator Marcus Maye has done just that.

As “quarterback” of the secondary, the free safety generally assumes responsibility for calling out plays and assignments, and making sure everyone in the backfield is in the correct position prior to the play. After the ball is snapped, the ability to quickly and correctly read and react from the free safety position requires a particularly advanced football IQ given the nuances and complexities of modern NFL offenses.

Maye’s performance so far this year though has been more like what you would expect from a veteran starter at the position. He’s third on the team in tackles with 36, and leads the team with two interceptions, with nine games remaining on the schedule.

It takes a special player to do what Maye has done for the Jets this year, and expectations moving forward should be adjusted as a result.

Drafted out of TCU in 2016, Redskins wide receiver Josh Doctson is beginning to show signs of the potential that prompted Washington to take him in the first round of the draft. At 6’2″, weighing 206 pounds, Doctson’s large frame and high-point ability make for a large catch radius, making quarterback Kirk Cousins’ job easier and also providing a physical presence on offense for the Redskins.

After missing most of his rookie season with an Achilles injury, it’s taken Doctson some time to make up for the lost reps, and to develop rapport and timing with Cousins. He’s seen his target count increase in recent weeks, finishing Monday’s loss to the Eagles with three catches on five targets. Expect that trend to continue as Doctson seems primed for an expanded role when Washington takes on the Cowboys at home this Sunday.