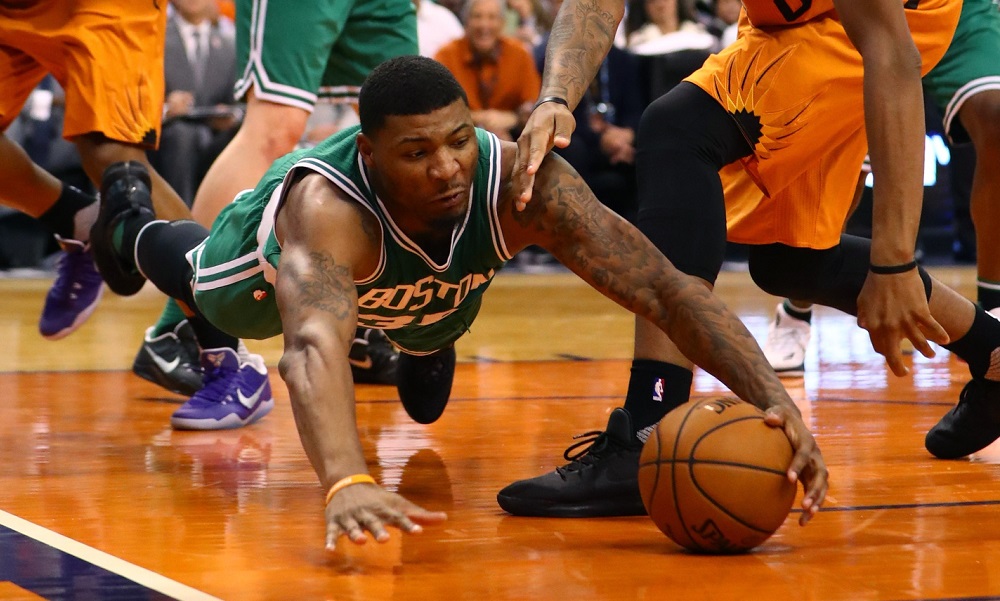 6. What is Marcus Smart’s value league-wide?

This will be one of the most important questions of the summer: How much do other teams value Marcus Smart?

There is, presumably, a price at which the Celtics would balk and let him walk, refocusing their efforts elsewhere despite how much the organization loves his energy and intensity. With rookie extensions for Brown and Tatum on the horizon as well as a max deal for Kyrie Irving, the Celtics can’t afford to throw a huge deal at Smart.

The only problem: There isn’t going to be a lot of cap space available league-wide to sign him. Smart’s options are limited. He could accept a smaller deal for multi-year security, he could take his qualifying offer and hope the 2019 market is friendlier, or he could hold out hope a team like the Phoenix Suns drafts Deandre Ayton and tries to sign him to pair his defense next to Devin Booker’s shooting.

The latter is possible but not guaranteed. It only takes one team to offer Smart a contract for the Celtics to potentially lose him, but whether that offer exists remains to be seen.

There are many questions to be answered this summer in Boston. We want to know if Hayward and Irving are healthy enough to return at full strength; we want to know who the Celtics will draft; and we want to know if there will be any blockbuster trades (because what other kind of trades does Danny do?).

All we can do is wait and see. We’ve been assured that the two stars will be ready to go, and there’s literally no way to guess what Ainge is up to (if you claim to know, you’re delusional).

The biggest question, though, is: Where will Marcus Smart be playing next season?

Wyc Grousbeck (love that guy) has already indicated he’ll pay a luxury tax to keep this group together. But what if Smart and the team can’t agree on his value? What if he gets a huge offer from a team that needs to market a rising star? (The Knicks would do it in a New York minute if they could work out the numbers.) That would be disastrous.

If you watched the Celtics in the 1990s, you’ll remember a small forward named Rick Fox. Although he was a better shooter than Smart (who isn’t?), Fox’s game was similar in many ways. He had a knack for making game-changing plays, especially on defense. He sometimes pulled bonehead moves. He didn’t normally score a lot, but almost always made an impact.

When Rick Pitino brought his grift came to Boston, he inexplicably cut Fox loose. The six-year veteran then signed with the Lakers, where he won three rings as a role player who started more often than not. Meanwhile, the Celtics were mostly terrible and sure could’ve used a player who impacted winning. Like Fox. Like Smart.

Marcus Smart may not be the most talented player in today’s NBA. He may be a lousy shooter. He may do idiotic things to hotel picture frames. But his skill set is unique and irreplaceable. I would hate to lose him – especially over contract issues. Because it will be painful if money prevents this team from reaching its full potential.

On Page 2: The Cs were thinking like the fans

“When we lost Kyrie, we were trying to figure out how it was going to go,” said Marcus Morris. “Then Jaylen (Brown) went down for a little while, but we still kept winning.

“I think that’s when people realized we were good, and our confidence just soared from there. It was more like, ‘Hey, we don’t have nothing to lose at this point.’ ”

The C’s lost by two to the Pacers when Irving played 16 minutes in his last game, and they fell by one at home to Washington a few days later and split a two-game trip to Orlando and New Orleans.

Then they won six in a row, with home wins over Oklahoma City and Toronto bookending a four-game road sweep of Portland, Sacramento, Phoenix and Utah.

“Once we kept getting wins anyway — once we saw how good we still were — that gave us hope,” said Terry Rozier. “We just built off of that. When we started winning even without those guys, we just kept building. We kept getting better.

“We started realizing we had each other, and that’s all that matters.”

Players and fans rarely think alike. For example, the game 7 loss to the Cavs: except to use it for motivation, the players have likely already put it behind them, because they accept that there’s nothing they can do to change it. Meanwhile, fans will obsess endlessly about it and desperately seek payback next season.

So it’s fascinating to read these quotes where the Celtics players came to believe in themselves the same way that we did.

The bond between the fans and these guys has never been tighter.

And, finally… JR has always been JR

If you remember JR Smith being a jackass in previous playoffs – elbowing Jason Terry in 2013, punching Jae Crowder in 2015, and shoving an airborne Al Horford in the back this year – then you probably enjoyed watching him give away a chance at a Finals victory on Thursday night. Before we leave that alone, here are two reminders that JR has always been a little short in the basketball IQ department.

Friend: How could JR not know the score?

Me: This is the guy who, during one game, forgot he was IN THE GAME.https://t.co/4guRMn5xUW

Hilariously, in that video clip, the player JR said hello to was none other than his old “friend” Jason Terry.

NBC Sports Boston: 2018 Mock Draft: Who will Celtics take with No. 27 pick?  |  Ainge not exactly blown away by this draft

Herald: Aron Baynes is more than rim protector for Celtics