Your Morning Dump... Where we trade Kyrie (not really, but maybe?) 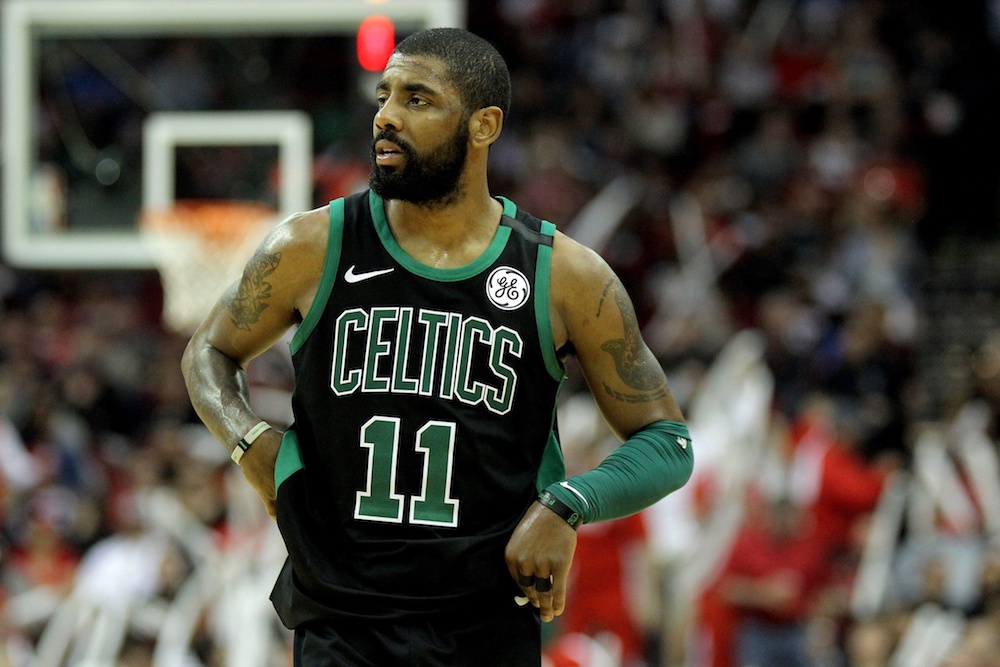 Your Morning Dump... Where we trade Kyrie (not really, but maybe?)

For now, we’ll focus on the five players – Irving, Horford, Hayward, Brown and Tatum – who could be in line for max contracts. Using the current future cap projections, if Irving, Brown and Tatum all sign five-year maxes and Horford and Hayward sign at a discount (say, $25 million and $30 million per year, respectively), Boston would be looking at paying five players a total of $153 million.

In short: Boston can’t afford to keep all five guys.

Remember: Irving was only available for a group interview with reporters in Boston on Tuesday because he was promoting his new “Uncle Drew” movie. That’s not to say he’s more interested in the bright lights of a big city than being in a winning situation; but this also will be the first time in his career that he will be an unrestricted free agent, able to choose where he wants to go.

While that future very well may be in Boston, there’s nothing guarantee it will.

In yesterday’s Dump, Jeremy broke down why not to be alarmed by Kyrie Irving’s somewhat cryptic interview comments surrounding a future in Boston.

I’m with him on that, but given the Cs will enter next season with Kyrie on the final year of his deal, they could just get ahead of his free agency process and make it someone else’s problem — they could trade him this summer.

It’s funny, as Tim Bontemps mentions in his article, both Irving and Ainge are primed to find themselves in unchartered waters a year from now if no extension is struck and Kyrie is still on the roster: Irving has yet to have his moment in the free agency spotlight, and Ainge and the Celtics have yet to have to try and keep a player of their own. Not since Ray Allen have the Cs been burned in free agency, and they’ve spent the last two years plucking Al Horford from the Hawks and Gordon Hayward from the Jazz.

As is often the case these days, players relish their chance to hold court during the first few days of July and teams would rather avoid to elaborate pitches and just get their guys to sign.

So, would Danny pull a Belichick and trade a player away a year before he has to deal with his free agency? As much as the Celtics dearly missed Kyrie this spring, they’re going to get Gordon Hayward back, and they would get something back from a team in a deal.

Roster building, especially with a team on the precipice of being truly great for many years to come, is a delicate balance, and so surely every scenario has been put on the table. Given that the Cs truly cannot pay everyone, maybe they start to sort things out now, and fireworks don’t take a summer off.

Or maybe they don’t mess with a team that almost made the finals and is bringing back two all-stars and deal with Kyrie next summer.

On page 2, basketball is less than a month away

The Celtics won’t have as many big names on their summer league roster this year (the Brooklyn picks were going to run out eventually) but a roster that is expected to include Guerschon Yabusele, Semi Ojeleye, Kadeem Allen and future draft picks will suit up for a couple weeks of action in Las Vegas starting on Friday, July 6th.

The NBA released the full pool play schedule earlier this week, so here are the first three games the Celtics are locked into before tournament play starts on July 11.

I don’t care if it’s Summer League without high draft picks, I’m just excited to see the Cs on a basketball schedule again.

This year’s Celtics/Sixers opener won’t have the same must-watch appeal as last year’s did with Tatum, Simmons and Fultz, although I be there still may be a Fultz sighting.

In fact, none of those three match-ups is going to include a can’t-miss player unless one of the teams trades up in the draft this year.

And finally, check out Tom Westerholm’s story on the other Celtics

Celtics Crossover Gaming plays three tournaments during the season — one before the season, and two midway through. At the end of the year, the team competes in the playoffs and the finals for $600,000.

The team’s most recent tournament took place over the weekend, as they stormed to the finals — defeating Boyd (Dimez) and the Mavericks by 18 along the way — before falling to the Trail Blazers. For making the finals, the team earned $25,000. The Blazers got $75,000.

Those are stakes that could make for sweaty hands at the controls.

“I take a step back sometimes and I’m like, ‘Man I worked hard for this,'” Thomallari said. “I didn’t cheat or anything. So why am I nervous? And then I calm down.”

In the meantime, the players are enjoying Boston.

“There’s so much history in this city,” Snowden added. “I’ve got to go explore a little bit.”

Maybe it shows my age a bit, but I still can’t believe guys are getting paid by NBA teams to play a video game. Regardless of my opinion on the matter, this was a really cool story. The guys on the 2k Celtics are from all over the country, many of them were working restaurant jobs, or had recently lost jobs, and now have the chance to do something they love, on a big stage, and get paid for it.

Good for these guys. As for me? Be back in a bit, going to go practice my button mashing.