Your Morning Dump… Where the Celtics must proceed with caution 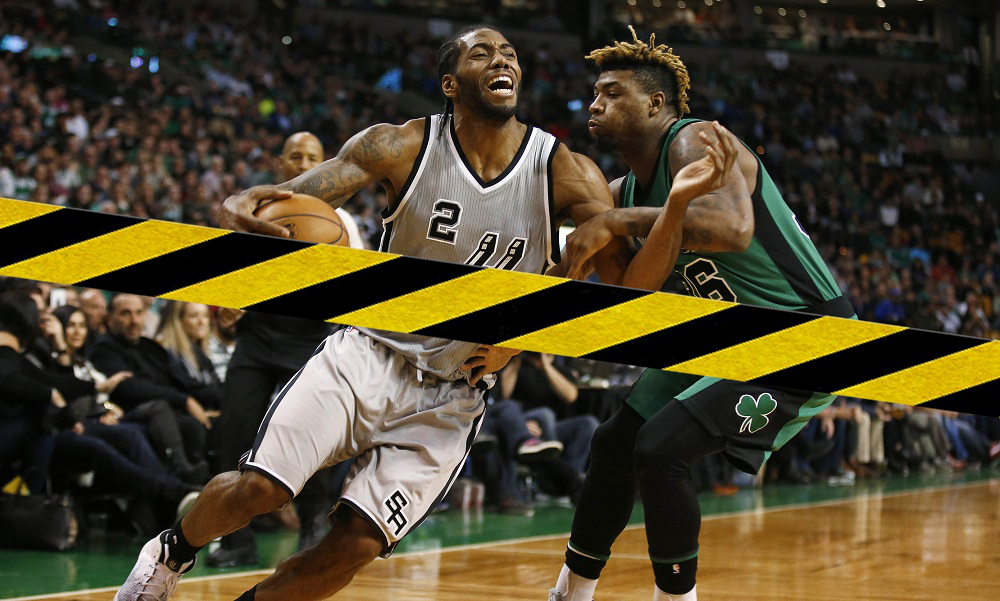 Your Morning Dump… Where the Celtics must proceed with caution

As you’re no doubt aware, Kawhi Leonard said yesterday that he wants out of San Antonio. This got people’s attention. John Karalis gave his thoughts on the prospect of the Celtics trading for the suddenly enigmatic superstar, and so did a few bazillion other NBA writers. Most of them, at a minimum, are wisely urging caution.

Leonard will become a free agent in the summer of 2019, meaning this upcoming season is the only year Boston is assured he will play for them. That creates a scenario in which the Celtics are banking on Leonard having the kind of experience that will make him inclined to sign on long-term. But considering the circumstances surrounding him being available, even if the team is successful that doesn’t necessarily move the needle closer to a long-term deal with Leonard.

The safe play here is for the Celtics to stand pat. However, Ainge has never been afraid to gamble. He likes proven commodities, and there aren’t many better ones out there than Leonard. The Celtics can outbid pretty much anyone for Leonard if they want to. Will the C’s be happy to watch him land in LA and stay on their current growth path? Or will they see another super team formation in Hollywood as a long-term obstacle that’s worth putting a stop to?

Nobody ever wants to trade the promising young guy they’ve fallen in love with. There were Celtics fans who didn’t want to trade Al Jefferson for Kevin Garnett.

But this is different. Tatum is different. He not only exceeded expectations, especially defensively, but he’s still going to get better. He’s a young budding star who could be the face of your franchise for more than decade. It’s not hard to envision him as a regular all-star and future Olympian. Not only is he good, but he has shown the temperament to be the guy making a big plays in key spots.

And having him requires nothing.

Don’t expect the Spurs to take a discount, either. Leonard is a genuine star, and if the Celtics are pursuing him, presumably they feel good about their chances of keeping him. Buford is smart enough not to take a mediocre package, or a damaged point guard and a pick with the potential to slip to No. 8 (and Ante Zizic).

(This next one is mildly amusing in the way the writer glosses over any salary-match difficulties, and somehow gets Kawhi to Boston without giving up any of the Cs’ core players.)

Even after dealing for Kyrie Irving last offseason, no team has more assets available to trade than Boston. They have a 2019 first-round pick from Sacramento (top-one protected), a 2019 Clippers first-round pick (lottery protected), and a 2019 Grizzlies first-round pick (one-through-eight protected). Pick your poison. The only hurdle is making the salaries work without giving up one of Boston’s max players, but we know general manager Danny Ainge can work magic.

Even a one-year rental could be worth it for Boston. A core of Irving, Leonard, Gordon Hayward, Jayson Tatum, Jaylen Brown, and Al Horford coached by Brad Stevens could win the title right away.

The Ringer: The Most Likely Kawhi Leonard Landing Spots

The many variables and unknowns in this situation are terrifying. A successful trade for a healthy Leonard could realistically lead to Banner 18. But if it goes wrong – if Kawhi isn’t physically sound, if he walks after one year, or if the price is Jaylen Brown and then he becomes a superstar with the Spurs – then all the progress of the past five years could be wiped away.

That’s why I’d rather have Ainge play it safe. It’s the same position I’ve had all along, through all the rumors: Keep the core together, bring back two All-Stars, stay healthy, and get to the Finals (especially if LeBron goes West).

The one problem is that I don’t want the Lakers to get Kawhi. Just the thought pisses me off. While the Celtics have executed a brilliant rebuild since trading away Pierce and Garnett, the Lakers have done nothing except lose. Having missed the playoffs for five straight years, they’ve cashed in on several high draft picks. Other than that, though, their only plan has been to count on top free agents seeking the glamour of L.A. And that’s exactly what’s happening here. Plus, if Kawhi ends up there, LeBron would likely follow. And the Lakers will be great again, in spite of themselves.

At least Woj throws some cold water on the L.A. narrative:

Check the links for more opinions from near and far.

Globe: Yes, the Celtics would be interested if Kawhi Leonard hits the market

Boston.com: Should the Celtics trade for Kawhi Leonard? Chad Finn says no thanks

Sports Illustrated: Kawhi Leonard Wants Out and the NBA Offseason Is Here

Yahoo: Why Kawhi Leonard’s desire to move on could reshape the league

Herald: Interest is there, but Celtics face obstacles in pursuit of Kawhi Leonard

Tatum took his game to a completely different level during the 2018 Playoffs, leading a Celtics team that was lacking Hayward and star point guard Kyrie Irving all the way to Game 7 of the Eastern Conference Finals. He averaged a team-high 18.5 PPG and came just one point shy of Kareem Abdul-Jabbar’s rookie postseason scoring record of 352 points, while also tying Abdul-Jabbar’s rookie playoff mark of 10 20-point games.

Tatum’s arc of development covered incredible altitude over the duration of his rookie season, as his status went from being a question mark on Day 1 to becoming a star by the end of the postseason.

Tatum places fifth on this subjective ranking of all-time Celtics rookies. “Fifth?!” you say, “why not first?” Well, to be fair, the four Celts ranked ahead of him went on to combine for 24 championships. Fifth-best rookie season of all time is pretty impressive considering this franchise’s history.

And, finally… So Kyrie could win an Oscar and a Grammy?

With the five-time All-Star awaiting the release of his feature film, “Uncle Drew,” which hits theaters June 29, Irving has pushed out another piece of related content: the “Uncle Drew” soundtrack, which includes a song — entitled “Ridiculous” — that Irving sings.

The song includes a chorus that goes as such: