Your Morning Dump... Where we share a few gems from Brad Stevens' sit down 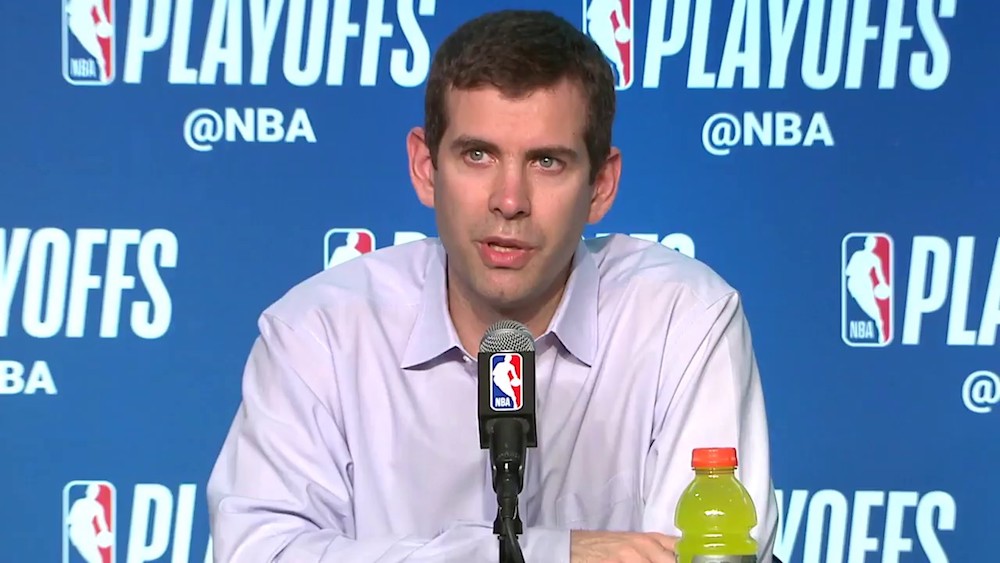 Your Morning Dump... Where we share a few gems from Brad Stevens' sit down

Q. How do you approach the process of helping to kind of sell Irving on Boston over the next year? Do you just keep it normal all the time? Do you have talks with him? Do you invite him to dinner like you did recently?

STEVENS: None of that stuff — there’s no intent to sell. Free agency is there for a reason. Everybody should be able at one point in time to make their own decision with what they want to do. All we want to do is make sure that every player that comes through here — whether it’s Kyrie Irving or whether it’s the 15th guy on the bench — knows that we’re invested in him, we’re going to do everything we can to make this a great experience, and this is a train going in the right direction. Like, we have a lot of good things going. So you don’t do anything different. We’re going to be ourselves. We’re going to coach. The guys are going to play. And when that time comes for any of our guys then they have the right to make their own decision. And ultimately, hopefully, they recognize how good of a thing we’ve got going in Boston.

This was a great sit-down between Jay King and Brad, and though Kyrie Irving’s free agency is a year away, Jaylen Brown’s is still a few years away, and Jayson Tatum’s one year further down the road, this answer from Stevens is instructive in demonstrating how the Celtics will approach the free agency process of its own guys when it comes time.

And how can you not absolutely love the answer? There’s nothing to sell about the Boston Celtics because, first and foremost, it’s the Boston Celtics. If you’re not captivated and energized by playing for a franchise with so much history, a ton of front office and coaching stability and a wild fanbase, then there’s nothing Brad and Danny Ainge could say to convince you otherwise.

Instead, it’s all about making sure guys feel valued and invested in while they’re here, and then letting them make their own decision. I know we’re still a year away from a big-time Celtic hitting free agency, but I feel pretty optimistic that guys are going to want to stay here and grow here together.

John talked about this yesterday with Aron Baynes, who is reportedly going to come back and do so for multiple years. Baynes has been around long enough, and been around a good program in San Antonio to know when he should plant some roots. In addition to seeing Boston as a chance to win a championship, he’s clearly felt valued by the Cs staff.

STEVENS: We want them back for a number of reasons. Their energy is contagious, and it’s contagious every day. I tell the story all the time about (how) Aron Baynes races people in warmups. And he just brings an infectiousness that I can’t describe.

This stuff, knowing you’re valued whether you’re a star or a role player, matters. To some (and seemingly to more and more guys lately) it matters more than no state tax or clubs that stay open on South Beach til 5am.

The entire Stevens interview is full of great stuff, but its how Brad and his coaching staff demonstrate that they care that gets me the most excited for this team, and its continuity, going forward.

On page 2, the Celtics and Spurs talked. Then they hung up.

If San Antonio gets serious about trading Kawhi Leonard, the Celtics, according to multiple league sources, would like to be involved. But there has been nothing — yet — to indicate they have a realistic chance.

A Western source with an interest in the proceeding told the Herald that the Spurs did have a brief discussion with the Celts yesterday, but there was said to be no real negotiation. The last previous contact between the teams occurred prior to the draft and did not include the C’s making an offer. That brief call, according to two league sources, went nowhere.

If the Spurs start getting down the road with the 76ers in the next week, and there’s buzz that Lebron James is waiting things out to sign with Philly once the Leonard trade is executed, would the Cs pick up the phone and try to make a deal simply to thwart a Philly super team?

That’s the only way I see the Celtics making an offer this summer that catches R.C Buford’s attention. And even then, I doubt Danny Ainge is as reactionary as I am.

Finally: Would you welcome Avery Bradley back?

Don’t take this as a lobbying effort for bringing Bradley back.  He’s a good player, but re-signing Smart should be the Celtics’ top priority in terms of free agency.

But if they have to go in a different direction, why not take a path they’re familiar with and frankly, had a decent amount of success with?

Injuries this past season limited Bradley’s effectiveness and ultimately resulted in his least productive season, dating back to when he was a rookie.

And injuries have been, more than anything else, the biggest concern/knock against Bradley.

Nobody knows this better than the Celtics.

When healthy, he provides elite play defensively in addition to being an above-average rebounder from the guard position.

NBCSports — In lieu of Marcus Smart, could Avery Bradley be a backup plan for the Boston Celtics?

I actually think whichever contending team gets Avery Bradley on a prove-it, one-year deal will get great returns if AB stays healthy.

But Bradley, for all his on-ball magic on defense is not in the same stratosphere as Marcus Smart as an all-around defender.

Let’s not even make this a conversation. Match the offer, Cs.