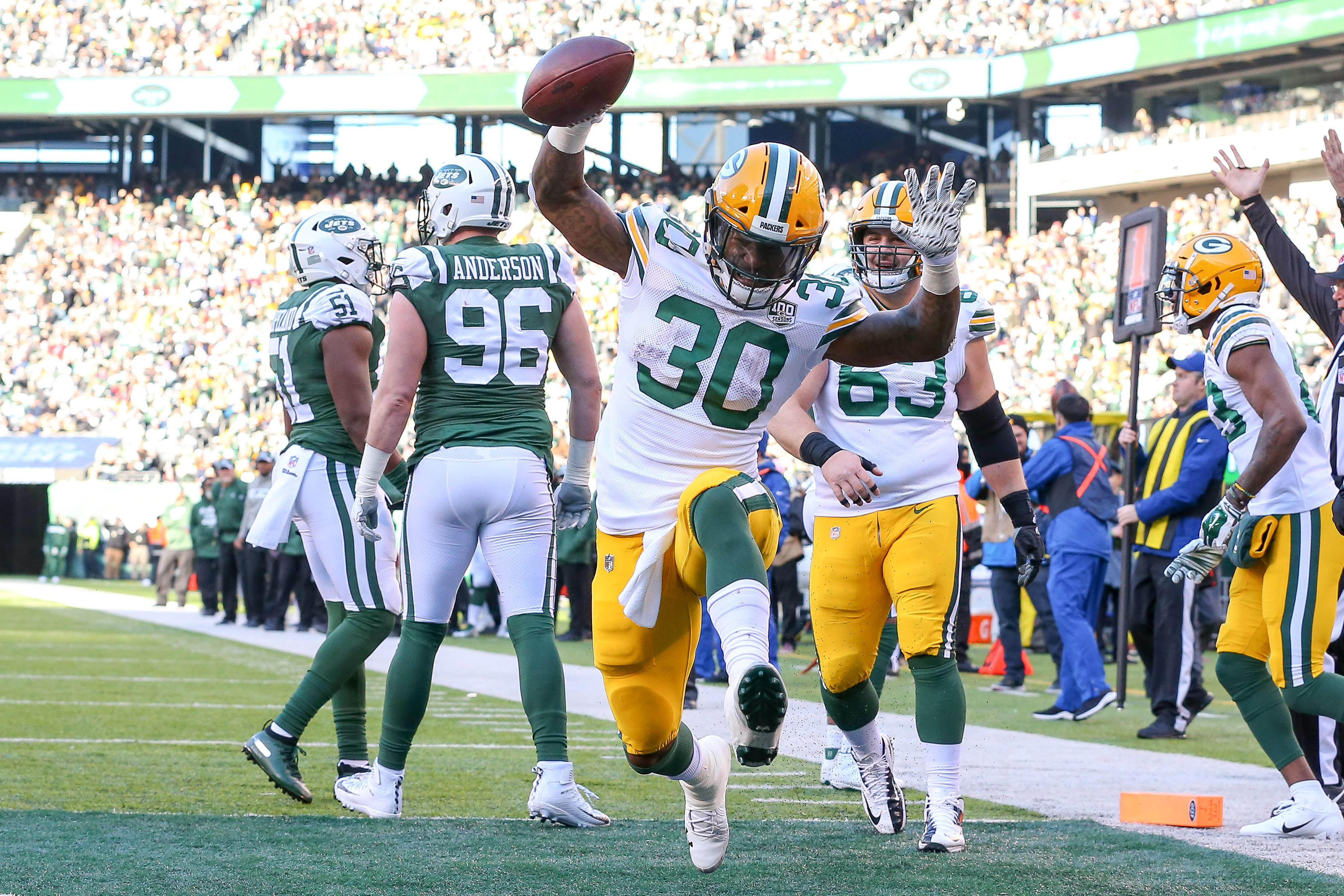 The Green Bay Packers got their first road win of the season in their final try with a 44-38 overtime victory over the New York Jets. The win improved the Packers record to 6-8-1 on the season with one game remaining next Sunday against Detroit. Aaron Rodgers finished the contest with 442 yards passing, two touchdown passes, and two touchdown runs.

Here are seven key takeaways from the Packers victory over the Jets:

1. Aaron Rodgers Is Not Dead Yet

After a sluggish start, Rodgers showed he still can get things done when the chips were down. Trailing by 15 points early in the fourth quarter, he engineered a comeback and eventual victory. Rodgers finished the game 37-for-55 and ran the ball decisively when he had to, rushing for two touchdowns and a two-point conversion in the game.

With the offensive line banged up, he was under consistent pressure, but Rodgers kept his cool. There were still some missed throws, but overall, Rodgers showed the leadership and toughness that he needed to show when the team needed it.

Rodgers also spread the ball around well, hitting nine different receivers while still getting the ball to Davante Adams enough (11 catches although for just 71 yards) to satisfy his top target. Jamaal Williams had six catches with both Equanimeous St. Brown and Marquez Valdes-Scantling finished with five.

2. The Special Teams Tried Hard to Lose This Game

The Packers special teams were horrible again and almost cost the team the game. Ron Zook’s unit allowed a 99-yard kickoff return, lost a fumble by J’Mon Moore on a kick return, saw Tramon Williams fumble a punt return (but Green Bay recovered) and was victimized by a fake punt in the fourth quarter. Another long kick return in the final minute of the game set the Jets up for the tying field goal after the Packers had dramatically come from behind and taken the lead late in the game.

This unit has shown no significant improvement over the course of the season and has truly cost the Pack a few games in the standings.

The only bright spot today was Mason Crosby kicking three field goals and three extra points and Rodgers converting a two-point conversion that helped the Packers get the game to overtime.

3. Jamaal Williams Had His Strongest Game of the Season

Running back Jamaal Williams had his best overall game of the season. He was the only RB who carried the football and he finished the game with 95 yards on 15 carries and a touchdown. His average was 6.0-yards per attempt. Williams also ran the ball hard, picking up key yards after contact. His touchdown in the second quarter was highlight reel worthy and showed his balance, toughness and determination.

Williams also added six receptions for 61 yards and worked hard to get out of bounds towards the end of the first half to stop the clock and help keep a drive alive.

Williams may not be a dynamic as Aaron Jones, but he’s tough, smart and dependable and he really stepped up and played well in this game.

4. The Pass Defense Was Poor

The Packers pass defense made Sam Darnold look like the next Joe Namath for most of this contest. The rookie finished the game with a passer rating of 128.4. Darnold had all day to throw the football. The Packers managed two sacks in this game, one by Kyler Fackrell and one by Blake Martinez, but there was no real pressure on Darnold most of the time and he certainly took advantage of that.

In the secondary, the team was victimized by Robby Anderson again and again. Anderson finished the game with nine catches for 140 yards and a touchdown while Chris Herndon added six receptions for 82 yards and a score.

Darnold threw for a healthy 9.7-yards per attempt and completed 68.6 percent of his passes, great numbers for a veteran, let alone a raw rookie.

The secondary was a step slow for most of the game. Losing first-round pick Jaire Alexander certainly didn’t help the Packers ability to cover the Jets receivers.

Once again, the Packers defense failed to create any turnovers and allowed the opposition to move the ball with ease for most of the game.

5. Jake Kumerow Had His Moment

Packers fans were delighted to see wide receiver Jake Kumerow pull in his first NFL touchdown pass in the second quarter of the game. The 49-yard grab was a thing of beauty as he got between the corner and the safety and then cut across the field and into the end zone.

Kumerow finished the game with three catches for 68 yards and the score. He proved he could create big plays on December, not just in August.

The fan favorite still has a long way to go to be a starting receiver in the NFL, but this was a great first step for Kumerow and a great moment for his fans.

The Packers are already out of the playoff picture, but veteran DB Tramon Williams showed his toughness by returning to this game after taking a very hard hit on a return and being evaluated for a concussion.

Williams was determined not to let his teammates down and he gave the young secondary some much-needed experience and leadership today.

While this has been a very disappointing the season, the Packers didn’t quit today. They overcame a 14-0 deficit in the first quarter and trailed 35-20 early in the fourth quarter but came from behind and took the lead before winning the game in overtime.

Rodgers could have sat this game out but was determined to play and played well. Bryan Bulaga returned from an injury suffered in the first half and Tramon Williams also came back and played after taking a vicious hit.

Joe Philbin will almost certainly not be the head coach of the Packers next season, but he has won two of the three games he’s coached. The team has not quit on him despite having no chance to qualify for the postseason.