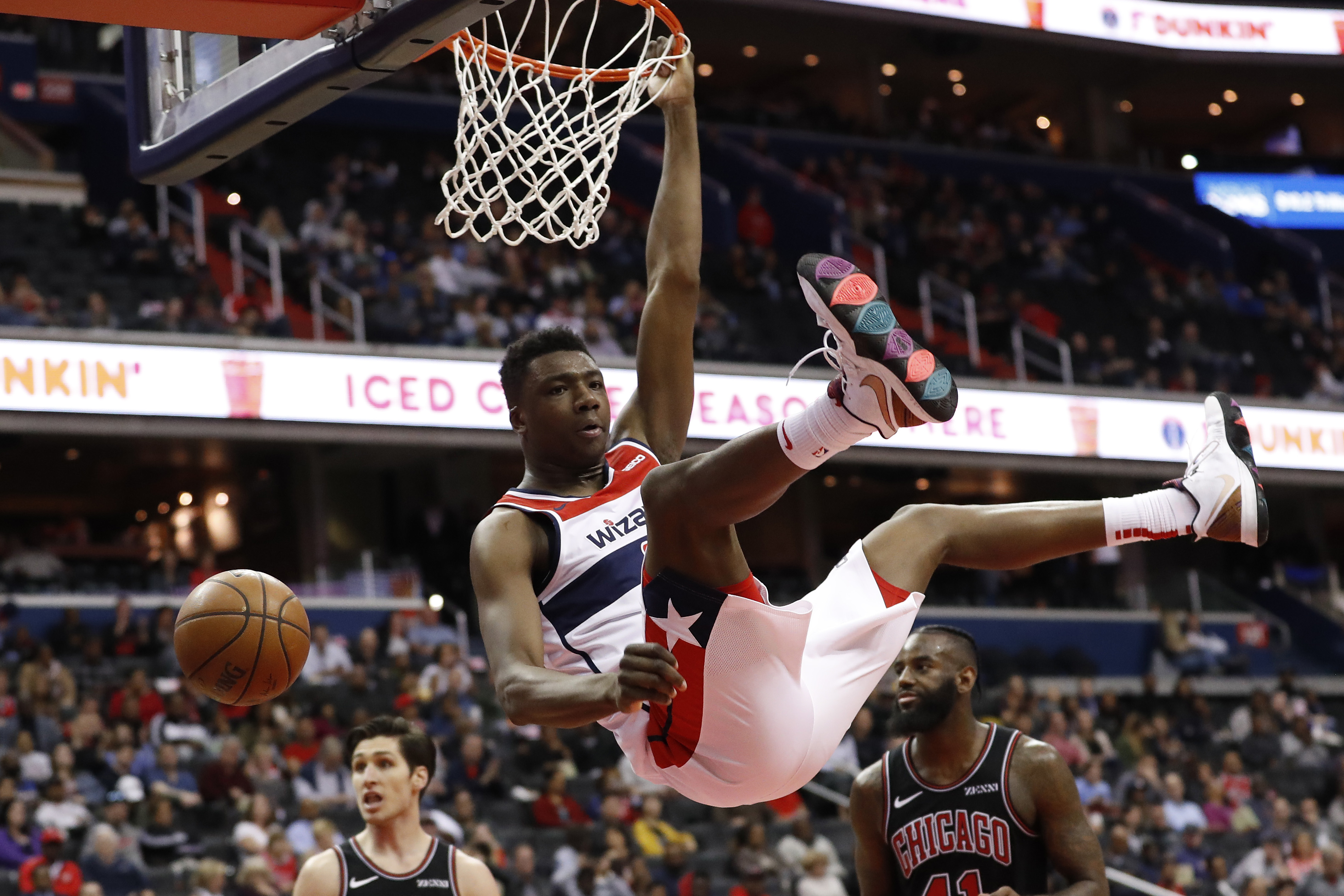 The Washington Wizards completed their most disappointing season in recent history last Tuesday by ending the regular season with a miserable 32-50 record months after majority owner Ted Leonsis named 50 wins as a goal. There is no guarantee that things will be prettier during the 2019-20 season despite the removal of Ernie Grunfeld as Team President after 16 seasons in control. The next front office executive still to be hired will be hamstrung by the remnants of Grunfeld’s decisions for the foreseeable future. Here is a rundown of Washington’s salary cap and nine impending free agents.

It is all but certain that the Wizards will reject Jabari Parker’s $20 million team option and that Dwight Howard will opt into his $5.6 million player option that Grunfeld so generously gifted the future Hall of Famer. Between the first year of John Wall’s supermax contract, Bradley Beal’s penultimate year of his max contract, Mahinmi’s final year of his colossal contract that I do not think should be stretched, Troy Brown Jr.’s sophomore season, Howard, and a first-round pick, Washington will only have six players on guaranteed contracts ahead of the start of free agency in July.

Assuming they stay at the No. 6 overall pick, subject to change based on May 14’s draft lottery where they have a nine percent chance at the No. 1 overall pick and a 37.2 percent chance to move into the top-four overall, the Wizards will already have $93.2 million allocated to less than half of their roster. This includes their first-round pick’s $4.1 million first year salary. Should Washington eventually guarantee the contracts of Jordan McRae and Tarik Phillip at $1.4 million each that brings their total up to $96.1 million for eight players.

With the salary cap set at $109 million and the luxury tax line at $132 million, there is simply not enough money to have an extremely competitive roster. Although Leonsis publically states he is willing to enter the luxury tax if needed, it seems highly unlikely given he just instructed Grunfeld to get under the threshold this season. In trades of Marcin Gortat, Jodie Meeks, Jason Smith, Austin Rivers, Kelly Oubre Jr., Otto Porter Jr., and Markieff Morris, Grunfeld widdled away at a team payroll north of $152 million including the luxury tax all the way down to $123 million. That was important to Leonsis and his bottom line, which makes it hard to fathom the owner willing to pay the self-proclaimed “punitive” tax for the second time in three seasons.

Under such deduction, Washington will have less than $16 million to spend before reaching the salary cap and then an additional $23 million that they can apply various exceptions to in order to re-sign players (i.e. Bird Rights, Mid-Level Exception valued at ~$9 million, Veteran’s Minimum, etc.).

Let’s start with the restricted free agents the Wizards have. Washington will have the right to match any offer sheet the following five players receive and can go over the salary cap to re-sign them with their Bird Rights.

The 21-year old averaged 10.5 points and 6.3 rebounds in 20.8 minutes per game for Washington over 72 games including 53 starts. He is arguably the only free agent the Wizards should commit long-term money to and as a result the most likely to return to D.C. As a former second-round pick, Bryant only made $1.4 million last season. His defense is still a work in progress, but his chemistry with Bradley Beal is not.

For the second straight season, the Czech native saw extending playing time as a starter because of John Wall’s injuries. In 2018-19, he averaged career-highs in points (8.9), assists (5.0), rebounds (3.5), and minutes (27.1) per game. That will not blow most people away, but the 27-year old has proven himself as a viable point guard in the NBA and potentially even a passable starter in the right situation. Finishing his three-year, $9 million “rookie” contract, Satoransky could get price himself out of Washington’s budget if he so chooses. The Wizards obviously have a sizeable hole at point guard with Wall set to miss at least the majority of next season.

In the salary dump of Porter, Washington acquired a player they passed on in the 2015 draft when they selected Oubre. In 28 games with Washington, Portis averaged 14.3 points and 8.6 rebounds in just 27.4 minutes per game. Like Bryant, he is also limited defensively but provides a physical presence down low that the Wizards have not had since the Nene days. Portis will likely be more expensive than Bryant as a more proven commodity and there is not room for both bigs with Mahinmi still under contract.

Although he provided a handful of energy sparks off the bench, Dekker was only obtained to dump Smith’s contract. After averaging 6.1 points and 3 rebounds per game in limited playing time, as he quickly fell out of the rotation with the arrival of Parker and Portis, it is hard to see Dekker back in D.C. unless on a very team friendly contract like the veteran’s minimum.

An early call-up from the Capital City Go-Go, the 26-year old could provide Washington with some much-needed point guard depth. Randle averaged 5.5 points and 2 assists per game across 49 appearances and proved himself as a reliable 40 percent three-point shooter. His short stature, even though he is generously listed at 6-foot-2, hurts his upside. Then again, he could be a veteran’s minimum signee for the Wizards.

Now to the four unrestricted free agents that Washington would have to stay under the salary cap to re-sign, which will be very tight with less than $20 million to maneuver with, unless they use the non-taxpayers mid-level exception that will be worth around $9 million.

The former No. 2 overall pick certainly turned some heads with his play in Washington over 25 games by averaging 15 points and 7.2 rebounds off the bench. He was explosive and finishing like a mad man around the rim to the tune of 71.4 percent. He won’t get $20 million a year, but he could certainly get eight figures that would likely take him out of the Wizards price range although he does seem to want to return that could lead to a discount.

The move that was supposed to put the Wizards season back on track by reuniting the dynamic backcourt duo with the veteran that kept everything in order. Well, that did not work out. Ariza will certainly not return if he is looking for $15 million again, but because he does enjoy his time in Washington, maybe he comes back on a team friendly deal. It would be unwise to invest too much money in a forward that will be 34 before the start of next season.

The PG County native not named Kevin Durant already took the veteran’s minimum to come home. Unless he is willing to do that again or something south of $5 million a year it again would not make too much sense to bring back a soon to be 34-year old. He was a good locker room presence, especially for rookie Troy Brown Jr., so there is value in re-signing everyone’s favorite uncle. A dark horse possibility could be Green retiring though.

The 0.1 percent chance of the journeyman returing to Washington went out the door when the team allowed the veteran to leave with two games left in the season. He was merely a pawn in the last piece to get under the luxury tax by dumping Markieff Morris’ contract on the Pelicans.

If I were running the Wizards, I would only re-sign Thomas Bryant out of their nine impending free agents. Then I would look to fill out the other five roster spots on the team, since they might keep a slot open to save money, with a couple young players and trying to find some bargain veterans you can buy low on. Should Tommy Sheppard stay in charge into next season, it would make sense that he keep Satoransky around as it was Sheppard who initially discovered and pushed for his drafting. Others could stick around if the price is right, but with a limited bank account, Washington has limited choices to retool their roster ahead of the 2019-20 season.