Your Morning Dump… Where now we’re told the Celtics maybe don’t want The Brow – wait, what? 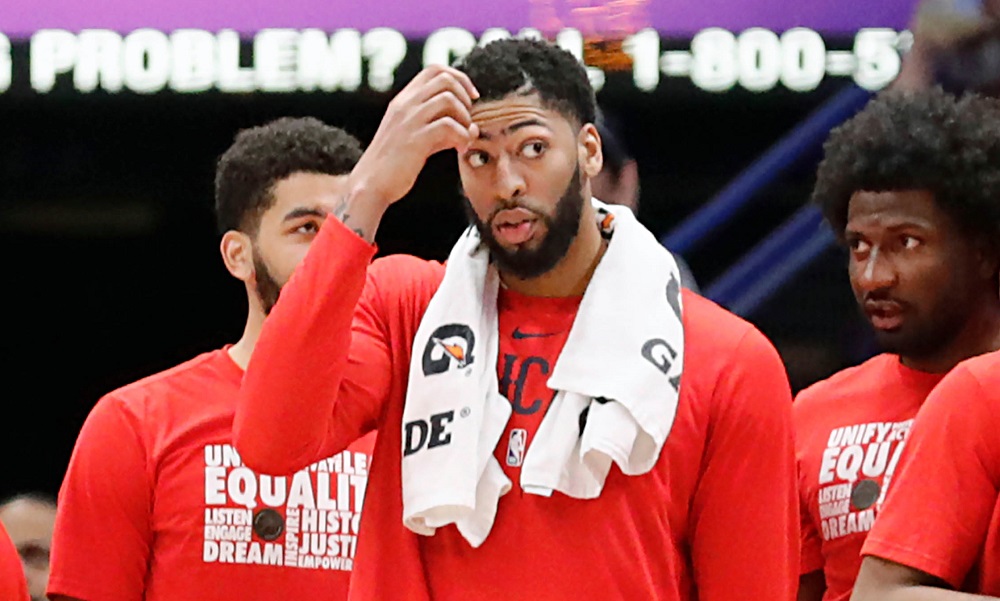 Your Morning Dump… Where now we’re told the Celtics maybe don’t want The Brow – wait, what?

With a trade more likely than not, we decided to reach out to Steve Kyler of Basketball Insiders, especially after reading the following tweet on Friday.

I can help a little… The Celtics have been actively exploring trades, and draft scenarios for players that would better lineup with a future built around Tatum and Brown… sources close to the team are skeptical that they can get Irving back but remain open to re-signing him. https://t.co/uUxWHyYifM

“As bad as the Celtics season went on a lot of fronts — and we’re starting to hear about it more, there’s a sense that maybe trying to do old guys and young guys isn’t going to work out,” said Kyler on the Bird Calls podcast. “Maybe the best path forward is the young guys. If you really look at how the Celtics played in the postseason last year to this year, the young guys were way more inspired than say a Kyrie Irving-led team. It seems like, at least at this point, the Celtics are looking at other things.”

Kyler feels that Anthony Davis isn’t nearly as high on Boston’s wishlist as in February before the trade deadline. The main reason being, of course, Kyrie Irving — Kyler doesn’t think the valuable point guard is going to re-sign with the Celtics.

SB Nation/The Bird Writes (Pelicans blog): Celtics not expected to pursue Anthony Davis as vigorously as prior to trade deadline, but door wide open for Knicks, Lakers and mystery teams

It’s difficult to remember a time when we weren’t hearing how Danny Ainge lusted after Anthony Davis, how he was collecting assets and passing up chances to go after other All-NBA types who wanted out (Paul George, Kawhi Leonard), all so he could deliver an offer the Pelicans couldn’t refuse.

But now the story is, eh, never mind? The Cs are no longer interested in bringing The Brow to Boston?

You gotta be kidding me.

Sure, some Celtics fans want Kyrie to walk and don’t want to trade the young core for perhaps only one year of AD. But most of us want to see Ainge get them both, and to have a real shot at Banner 18. That’s what you said in a poll we ran a couple of weeks ago:

There’s been enough talk. What we need now is real news, sooner than later. We need Woj bombs to start dropping. If we can hang on and get through this month, the draft is June 20 and the start of free agency is June 30 (6 p.m. Eastern). Then maybe the speculation and rumors will end for a while. Maybe.

On Page 2: And here’s another new possibility

Here, however, is one intriguing scenario in which the teams could potentially do business. If Kyrie Irving elects to sign elsewhere this summer, the Celtics might be more willing to embrace their own youth movement. That doesn’t necessarily mean a rebuild, but it’s a longer path to Finals contention if you throw the keys to the car to Jayson Tatum and Jaylen Brown.

Under that scenario, Al Horford might be more intrigued by win-now possibilities than sticking around to see if Boston’s 2018 playoff core — albeit with a now-healthy Gordon Hayward — could find that old Kyrie-less magic. He might alert Boston that he’d prefer to play for a more surefire contender, but is willing to help the team recoup assets in that process.

Horford could either opt into the $30.1 million final year of his contract and be dealt to Houston in a deal that could bring back, say, Clint Capela and assets. Or Horford could opt out and the teams could try to find a workable sign-and-trade in which Horford still gets longer-term security and a chance to chase a ring.

It’s still a long shot, but remember that Horford was mighty intrigued by the Rockets before he elected to sign with Boston in the summer of 2016. The Rockets brought Harden, Hakeem Olajuwon, and Clyde Drexler to their July sales pitch with Horford and made him strongly consider the team.

NBC Sports Boston: Could the Celtics find a trade with the Houston Rockets?

We said last week that the possibility of Horford leaving the Celtics is unlikely. However, this Houston discussion puts the subject in a new light, one that’s not good at all. It’s so enjoyable to watch Horford in green, and he’s been a cornerstone of much playoff success. It would be a shock if he was suddenly gone.

Again, all this speculation is a killer. Let’s get to the draft and free agency already!

And, finally… Who to root for, or against?

Tuning into Game 1 between Golden State and Toronto, it hit me: I had no idea which team to root for, or – perhaps more important – to root against.

That feeling was not natural.

For the past eight years, there was no need to even think about it – I automatically rooted against LeBron every time. Then I checked the list of NBA Finals opponents and realized that nearly every year that I’ve watched the NBA, the Finals included a player or team I couldn’t stand. Rooting against them was always a no-brainer.

The Lakers, Kobe, the Heat, Dwyane Wade, Pistons, Sixers, Knicks, Jason Kidd – there’s no way a Celtics fan can pull for any of them.

Whenever the worst happened and two hate targets met in the Finals, I made a judgment call. Example: Wade’s Heat vs. Kidd’s Mavs. Easy, I chose the Mavs because Dirk could get a ring (everybody likes Dirk). And in situations like Lakers-Sixers or Lakers-Pistons, the one constant has been to always root against the Lakers.

It’s actually been more than 20 years since there was no obvious team for me to root against in the Finals. That was when the Bulls played the Jazz two years in a row. I didn’t hate either team, and only leaned Utah because Chicago had won so much.

That’s how it is this year, for me at least. I don’t hate the Warriors, I’m just sick of them winning so much. (OK, I might hate Draymond a little.) And I don’t hate the Raptors because they’ve never faced the Celtics in the playoffs and therefore are not true rivals. (OK, Drake and Kyle Lowry are super annoying, though.)

So my approach for this Finals is to root for whichever team needs to win to keep the series close, ending in Game 7. Because an intense, competitive series would be the best Finals of all.

Toronto Globe and Mail: Toronto Raptors fans less than thrilled after Paul Pierce picks team to win title (They think he jinxed them, so even though he’s on their side, they booed him. WTF logic is that?)