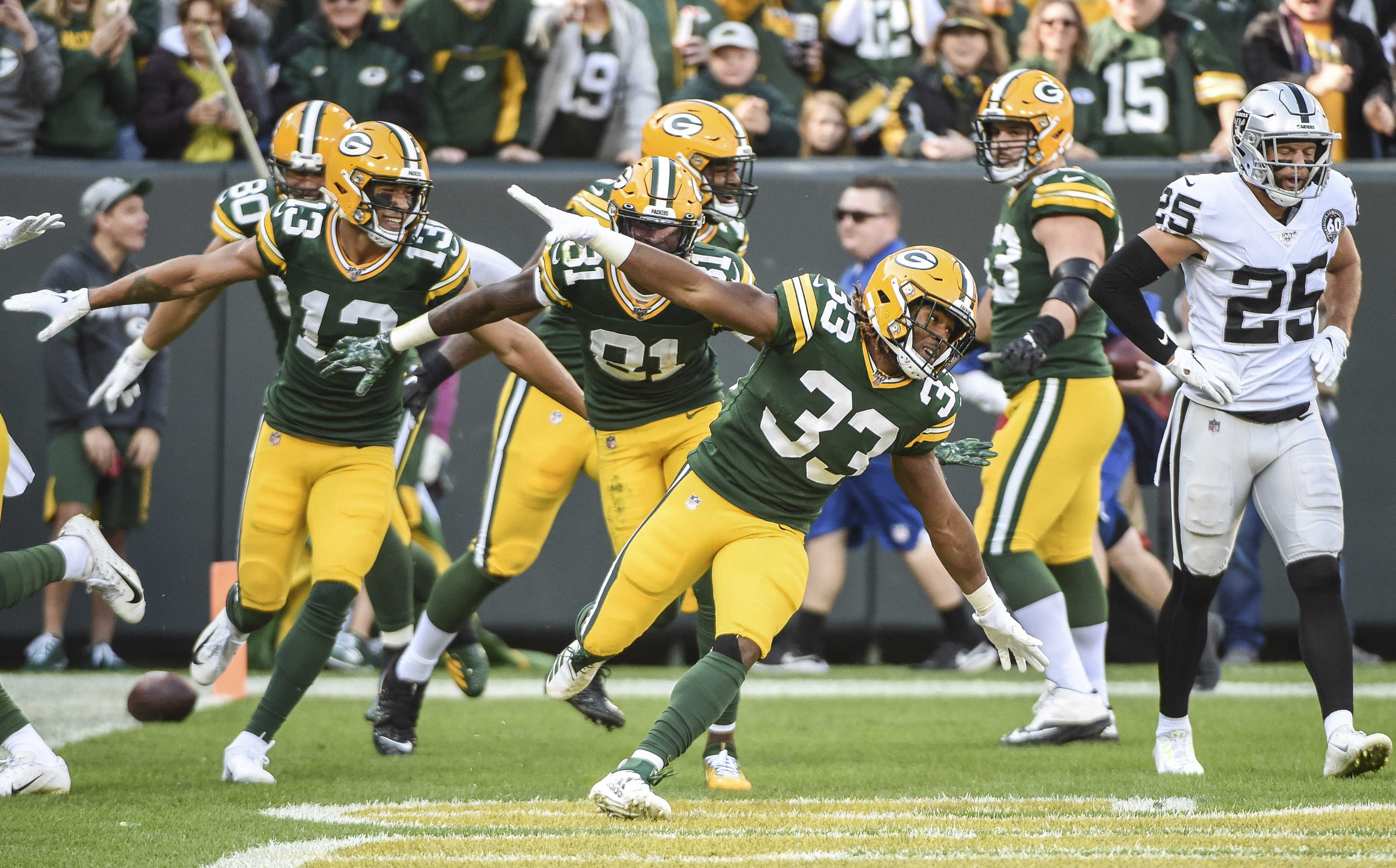 The Green Bay Packers improved their record to 6-1 on the season with an exciting 42-24 victory over the Oakland Raiders at Lambeau Field. Green Bay has now won eight straight games over the Raiders and is in first place in the NFC North Division.

Aaron Rodgers had his best game of the season, throwing for five touchdown passes and running for another as the Packers cruised to victory.

Here are 10 things we learned from the Packers 42-24 win over Oakland:

1. Aaron Rodgers Is Getting Comfortable in the New Offense

Aaron Rodgers had an almost flawless game, picking the Raiders defense apart for 429 yards and five touchdowns while running for another score. He completed 25-for-31 in the game and ended up with a perfect quarterback rating of 158.3.

Rodgers spread the ball around very well, throwing to eight different receivers. He completed four passes to his tight ends, 11 to his wide receivers and 10 to his running backs. Four different players had four catches each to tie for the team lead.

Even without Davante Adams in the lineup, Rodgers showed what he is capable of and had by far his best game of the season.

2. The Offensive Line Did a Great Job

The Green Bay offensive line does not get as much credit as it deserves. Rodgers was sacked only once all game by the Raiders and had plenty of time to dissect the Oakland defense throughout the game often throwing to his second or third option for key completions.

Last week against Detroit, the Packers again allowed only one sack. The Cowboys managed only a pair of sacks the week before that.

Bryan Bulaga has played outstanding football in his contract year while David Bakhtiari has played better in recent weeks after a sluggish start to the season. Inside, Corey Linsley continues to be a strong player while rookie Elgton Jenkins has been a strong addition to the line. Billy Turner played well against the Raiders as well, helping the offense move the football down the field in chunks against a Raiders defense that has played well most of the season.

Offensive linemen don’t have glamorous jobs, but they deserve credit for the success of this offense and should not be overlooked.

Green Bay’s defense allowed a lot of yards, but they managed to stop the Raiders and come up with big plays when it counted.

Oakland made six trips inside the red zone but only managed three touchdowns, one of which came long after the game was well out of reach.

The turning point of the game came when Blake Martinez forced a David Carr fumble and the ball went out of the end zone from the two yard-line giving the Packers got the ball back on a touchback.

The Packers also made a key stop on 4th and goal at the one with linebacker B.J. Goodson stopping Josh Jacobs short of the goal line and the Packers took over on downs.

Kevin King also came up with a key interception late in the game that put it out of reach.

The statistics weren’t pretty overall, with the Raiders gaining 484 total yards and averaging five yards per rush. But the Packers made stops when they had to and came up with two key turnovers to help win the game.

4. MVS Showed What He Can Do

Despite playing through injuries, Marquez Valdes-Scantling came up big for the Packers today. MVS finished the game with just two catches but they gained 133 yards and included a 77-yard touchdown strike that put the game out of reach for good.

Rodgers is still figuring out how to best use Valdes-Scantling’s speed, but MVS had a strong game and is the type of receiver who has the speed and ability to force defenses to respect him deep and opens things up underneath for both him and his teammates.

The consistency isn’t there yet, but Valdes-Scantling clearly has loads of ability and a potentially bright future.

5. Jimmy Graham Played His Best Game of the Season

Jimmy Graham has been criticized a lot since his arrival in Green Bay last season and often with good cause. But against the Raiders, Graham played his best game of the season. He made four catches on four targets for 65 yards and a touchdown.

Graham made several defenders miss, did not drop a pass and was effective throughout the game. The Packers need more performances like this from the veteran tight end moving forward.

Shepherd didn’t have a terrible game like he did a week ago, but he didn’t catch a pass on offense and looked tentative as a return man. He successfully made two fair catches when returning punts, but he had room to run on one of them. As a kick returner, Shepherd had four runbacks for just 60 yards. His average was just 15 yards and his long return of the game was only 20 yards.

Shepherd needs to get his confidence back quickly or the Packers could look elsewhere for a return specialist.

When the offense scores 42 points, your punter isn’t going to be all that busy, but JK Scott continues to be a difference maker for Green Bay. Scott punted three times and averaged 55.3 yards per kick and placed one punt inside the opponent’s 20. One of his kicks helped flip the field and change the Packers field position.

While most people complained when the Packers spent a draft choice on a punter, Scott has proven to be a great addition to the Packers and has made a difference in several games already.

8. The Pass Rush Wasn’t a Factor

The Green Bay pass rush has been outstanding this season, but it was not a factor against the Raiders. Not only did the Packers not register a sack in this contest, but they rarely got any pressure at all on Carr throughout the game. In fact, the Packers were not even credited with any hits on either Oakland quarterback.

The result was that Carr was able to pass the ball effectively, completing 22-of-28 passes for 293 yards and two touchdowns and a quarterback rating of 119.2.

Backup Mike Glennon was also not sacked or pressured, and led the Raiders to a garbage time touchdown late in the game.

The pass rush has been a big reason for the defense’s success this season and it will need to step back up and be a factor next week against the Chiefs.

9. The Running Backs Remain a Key Part of the Passing Game

Jones’ touchdown pass was a thing of beauty. He looked like a wide receiver as he turned his body around and adjusted to the ball in the air to make the catch in the end zone.

One thing rookie head coach Matt LaFleur wanted to do was integrate the running game and the passing attack. He has done that very well with the team running and passing out of similar formations.

All three backs are capable pass receivers and that was a big help to Rodgers in yet another game where Davante Adams was unavailable.

10. Blake Martinez Was in the Middle of the Defense

Blake Martinez was in the thick of so many plays in this game. The Packers ILB finished the game with eight solo tackles and eight assisted tackles for 16 total stops. He also forced the key fumble by Carr which was the turning point of the game.

Martinez still needs to make more plays closer to the line of scrimmage to be a truly elite linebacker, but he is a leader on this defense and always seems to find himself near the football.