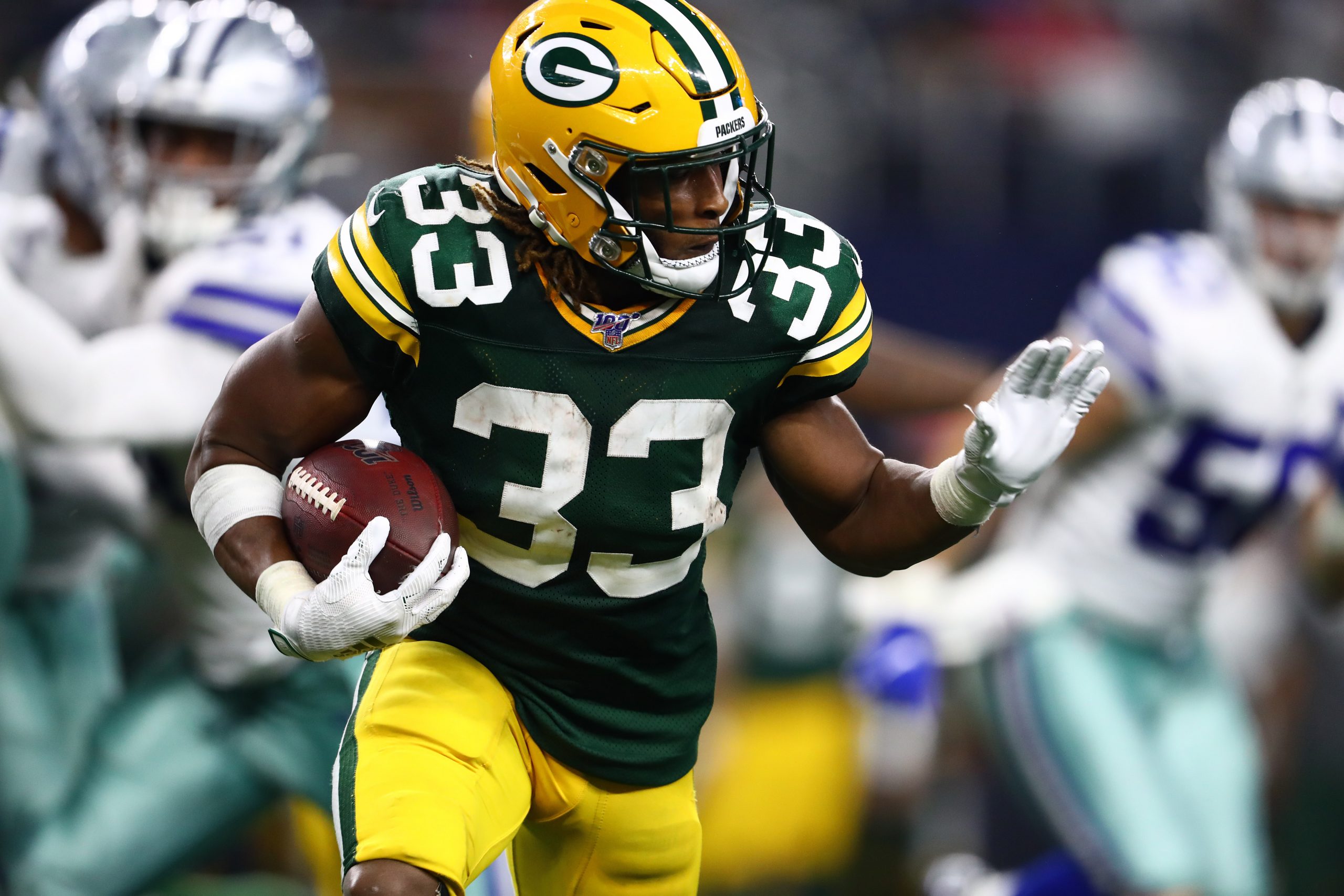 The Green Bay Packers offense has a breakout star this season in running back Aaron Jones. Through the first half of the season, Jones leads the Packers in rushing yards, pass receptions and touchdowns. He also stepped up to provide Aaron Rodgers and Matt LaFleur another game breaking weapon after top wideout Davante Adams went down with an injury in Week 4.

The third-year pro out of UTEP showed potential during his first two seasons but this year, he’s taken his game to another level.

Here are six reasons why Aaron Jones has become a breakout star for the Packers in 2019:

Coaches and scouts recognized Jones’ talent before he came into the NFL, but they also realized his limitations. Jones was always a quick runner with good vision, but his lack of experience pass blocking and running pass patterns made coaches hesitant to keep him on the field in all situations.

Each offseason, Jones has worked hard on improving in those areas. He showed some definite improvement last season as compared to his rookie campaign, but this year his blocking and receiving skills have been taken to another level.

“I’ve done a lot of work,” Jones told reporters back in training camp. “He [Matt LaFleur] is going to be putting me out there at wide receiver and using me in different ways in the passing game. I have to be ready. I am confident in my hands and am going to continue to work them and be ready when my number is called. I feel like it fits me very well. Run the ball and get the back involved in the pass game? Ask any back, they love to be involved in both.”

You can talk about a lot of things, but there is no substitute for hard work and dedication in this game and Jones has shown he is willing to put the time and effort in to improve his game.

How much has he improved as a receiver? In his first two seasons in Green Bay, Jones caught a total of 35 passes for 228 yards and one touchdown. This season, in eight games, he already has 34 receptions for 355 yards and three receiving touchdowns.

The Packers are also no longer concerned about leaving him in to block on third down and long situations.

Jones is only 5’9”, not a big man by NFL standards, but he weights in at a muscular 208 pounds. In his first two seasons in the league, Jones missed a total of eight games, playing in 12 contests each year. Thus far in 2019, Jones has remained healthy enough to play in all eight games on the team’s schedule.

Jones has kept himself in excellent condition. As a result, the Packers turned to their top running back to help run out the clock against Kansas City with a seven-point lead and just over five minutes left on the clock. Jones responded by running the ball on the first five plays of the drive, gaining 26 yards and two valuable first downs. After one carry by Jamaal Williams, Jones ran again for three yards before catching a pass from Rodgers for eight yards on third-and-five to put the game away.

“I don’t get tired,” Jones joked with reporters after the game with a chuckle.

The bottom line is the Packers top running back keeps himself in excellent condition and came through in the clutch.

3. Jones Is Getting More Touches

In 2018, Jones rushed 133 times in 12 games or nearly 11.1 rushes per game. This season, he already has 114 rushing attempts or 14.3 carries per game. The fact that the Packers have been ahead in most of the games they’ve played this season has also contributed to that total.

Jones is also getting a lot more opportunities as a pass receiver. In eight games this season, he already has more receptions (34) and targets (42) than he did last season (26 receptions on 35 targets).

LaFleur’s new offense runs the ball more frequently than Mike McCarthy did a year ago and involves the running backs more in the passing game as receivers.

Yes, the opportunities are there, but Jones has taken full advantage of them and the results are obvious.

4. The Packers Are Utilizing Jones More in the Red Zone

Last year, the Packers almost always tried to throw the ball in the red zone which meant they were relying extensively on Aaron Rodgers to put points on the board. This year, especially since Davante Adams went down the Pack is more willing to run the football when they get close to the opponent’s end zone.

Jones already has eight rushing touchdowns in eight games and 11 touchdowns altogether which is tops in the entire league. His low running style gives him leverage in short yardage situations and helps him reach the end zone from in close.

5. The New Offense Is Well Suited to His Talents

Green Bay’s new offense is very well suited to Jones’ abilities. Before the season, the LaFleur indicated that running backs would be a bigger part of the receiving game and not just on short swing passes but on throws downfield.

Jones has already caught passes for long gains including the 67-yard score against Kansas City and another 60-yard score that was overturned by replay and reduced to 50 yards when Jones stepped out of bounds at the 10.

LaFleur’s offense is designed to create mismatches for all his receivers including his backs. During his Monday press conference, the rookie head coach discussed what he looks to do with his backs in the passing game.

“I think when we get in some of those empty formations or we have the back out wide, it forces the defense to make a decision. If they’re in man coverage, (they ask themselves), ‘All right, who are we going to match up with who?’ Then it’s our responsibility to try to exploit the best matchup. Do you put a linebacker on him? Do you put a safety? Shoot, do you put a corner out there?”

6. The Offensive Line Is Playing Well

Jones has also benefitted from strong play in front of him. Having a healthy Bryan Bulaga on the field has helped improve things for the Packers as has the play of rookie Elgton Jenkins. Free agent addition Billy Turner has improved the play at right guard which was a revolving door of mediocrity last season. Both David Bakhtiari and Corey Linsley are very good run blockers as well.

Jones has acknowledged the strong play of his linemen. “It all starts with the guys up front, even on the screens,” Jones said after the win over the Chiefs. “They’re blocking, so it all starts with the blocking unit. Not just them but the receivers. So, it’s everybody doing their 1/11th and we’re all combining and it’s all working out and we’ve got to keep that chemistry going.”

So now the Packers have another elite weapon on offense to go along with Rodgers and Adams. Defenses now know they need to account for Aaron Jones if they hope to stop the Packers offense. For Jones, this may just be the beginning of the prime of his career. For the Packers, it’s yet another weapon that makes their offense even more difficult to defend.