Your Morning Dump… Where the Celtics headed west to discover themselves 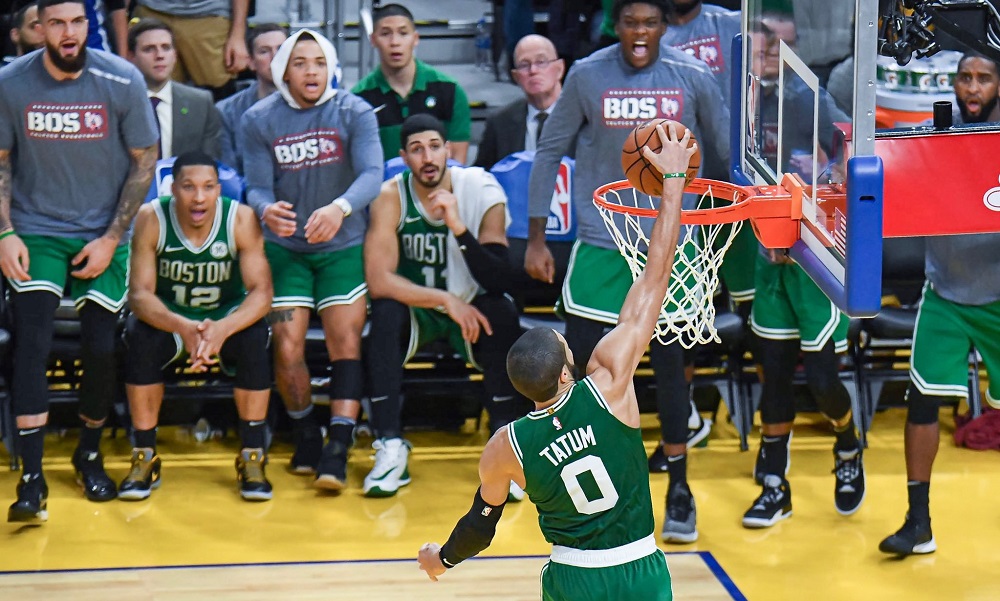 Your Morning Dump… Where the Celtics headed west to discover themselves

Now in his ninth NBA season, Kemba is the veteran voice on this young Celtics roster. But even he is discovering new experiences in his first year with Boston – he’s never before won 10 straight games as a pro.

The five-game trip west began with a win last night. It wasn’t pretty, but it still went in the W column. The Celts got a 12-point second quarter from Jayson Tatum, 13 in the third from Jaylen Brown, and 14 in the fourth from Walker. All three scored 20 or more. Marcus Smart added 15 on 5-9 shooting from the arc.

The Celtics have not been perfect during their long winning streak, and coach Brad Stevens pointed out that fact Friday morning, before his team faced the injury-depleted Warriors.

They were not especially crisp in this game, either, but they once again found a way to win anyway, 105-100, using a late 11-0 run to finish off Golden State. It was the 10th win in a row for Boston.

Jayson Tatum had 24 points to lead the Celtics and Kemba Walker added 20, but the two players combined to make just 14 of 42 shots.

Globe: 15 observations from the Celtics’ 105-100 win over the Warriors

The point is, this year’s group is winning even when they aren’t at their best. Last year, the Cs would’ve found a way to lose that game. The reason isn’t a mystery.

The Celtics are certainly a different club this year, and it’s about more than just the roster.

In the midst of discussing Kemba Walker prior to Friday night’s game against the Celts, Warriors coach Steve Kerr dropped in a line that sort of captured the change in the Boston vibe.

Kerr, an assistant on Team USA, said of Walker, “He’s a hell of a player. I was with him this summer in China for the (FIBA) World Cup. I’ve always admired his game, but it was fun to get to know him.”

He then added, “I had no doubt while I was coaching him this summer that he’d be great for the Celtics, given not only his ability on the court but the chemistry he generates with a group. Everybody loves playing with him, he moves the ball, he plays hard, he’s fun to be around.”

Winning 10 straight has already given us reason to be optimistic, but now the Celtics face four western games in the next six nights. If they can return home on the plus side – whether 3-2 or 4-1 or, hey, let’s get crazy, 5-0 – we’ll know we have something here, especially since they’re currently without Gordon Hayward.

Sure, a week from now maybe we’ll realize this was a pipe dream. But I do have a good feeling.

MassLive: 22 for 22: How Jaylen Brown honored his late best friend on the anniversary of his death  |  Jayson Tatum is terrible at layups, Marcus Smart predicted the game-winning play, & 10 things we learned from Boston Celtics vs. Golden State Warriors  |  Boston Celtics Kemba Walker on 4th quarter heroics: ’I just will those shots in a lot of the times’

The Athletic: Jaylen Brown remembers his late best friend with a song, a smile and a Celtics victory

This may not come as much of a surprise, but Fall really deterred opponents at the rim. With Fall out, the Mad Ants paraded into the paint. When he was in, he swatted shots or made drivers think twice about attacking. Simply being a deterrence makes him valuable.

How much in demand are the Maine Red Claws this year? NBC Sports Boston is televising all their home games, Celtics beat writers are journeying up to Portland, and if you want to see a game in person, you might have to buy through Ace Tickets or some other reseller.

The draw is undeniably Tacko Fall. The Celtics’ 7-foot-6 folk hero helped the Red Claws win their opener with plays like this.

Contributing to the victory, Tremont Waters had 17 points, 7 assists, and a crucial three-point play in the final minute. Romeo Langford also suited up for Maine, but the results weren’t as positive.

Here's Romeo Langford hurting his right ankle in Maine and limping off. pic.twitter.com/FDsj3gj2Bg

The team did not specify the severity of the injury. Langford appeared to roll his ankle contesting a shot by Fort Wayne Mad Ants forward Brian Bowen. He initially tried to walk it off and remain in the game but left when it became clear he couldn’t and headed straight to the locker room.

As the saying goes, if it wasn’t for bad luck, Romeo would have no luck at all. He’s already missed summer league, most of preseason and the first three regular season games with assorted injuries. He’s played just 14 seconds that count in a Celtics uniform. Now he can’t even stay on the G League court. It’s frustrating – for everyone, and most of all for him, obviously – that it might be a long time before we can even get a sense of how he fits in with this Celtics squad.

MassLive: Tacko Fall has a chance to simply be a basketball player with Maine Red Claws | Tom Westerholm

This season’s team is filled with wacky dudes who clearly like to have fun. You love to see it, and it’s refreshing to have that spirit back.