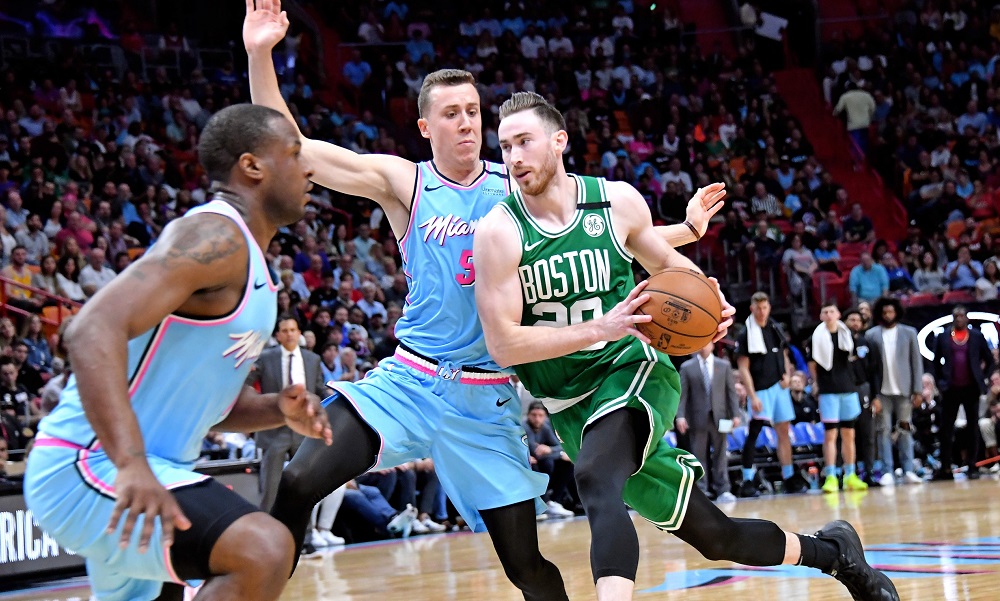 Important road win for the Celtics, who were again without Jayson Tatum or Enes Kanter. Boston moved to within a half game of the Heat in the East standings and owns a 2-0 head-to-head advantage.

We’ll say it: he’s looking like his former all-star self. Hayward had an impressive stat line in Miami, with game-high 29 points on 10-of-14 shooting, adding 8-of-10 from the line (a sure sign he was attacking the rim), 9 rebounds and 2 assists. He even went up and threw down an alley oop pass.

Another powerful night for JB.

Just a monster start from Jaylen Brown. 11 points on 4-for-4 shooting, three 3-pointers, a block and three assists. Doing it all.

He was shooting 2-of-7 from the arc at this moment, but with the shot clock dwindling…

Smart shot poorly almost all night and committed several brutal turnovers in the first three quarters. But in the fourth, he was 2-of-2 on threes, and added 2 free throws, 2 rebounds, an assist, 2 blocks – and 0 turnovers. That’s what “winning plays” means.

Excellent feed by Marcus Smart against that Miami zone, impressive finish by Daniel Theis. Caught a low pass and got up to finish before the shot blocker arrived #NBACast https://t.co/yR9UkL9AEj pic.twitter.com/jr07pfMTas

Theis had 10 points, 11 boards and 2 blocks last night. Obviously, as a starter, he’s getting more minutes than in his first two seasons, but he’s making it pay off with career highs in almost every category. Theis fills his role exactly as the Celtics need him to. Anyone who watches this team on a nightly basis probably understands that the only big man the Cs need to add is a healthy Robert Williams. (More on Theis.)

The Celtics jumped out to an 8-0 lead and then stayed ahead for almost the entire 48 minutes. Miami only took a brief lead in the second quarter, but the Heat hung around largely due to scoring off offensive rebounds. Late in the third, Miami held a 21-8 advantage in 2nd-chance points, and had closed to 77-76 in the final seconds of the quarter. Then this play happened:

Huge Grant offensive board and kickout to extend the Celtic lead to 4 at the end of 3 pic.twitter.com/3Egf0l3OsM

In the fourth, the Celtics scored 4 more points off their own misses and, more importantly, held Miami to zero. The Heat made just 7-of-18 shots in the last quarter, and without the second opportunities, they were done.