The Green Bay Packers were all set to start the NFL’s 75th anniversary season at home against the Minnesota Vikings when Pro Bowl wide receiver Sterling Sharpe decided he wasn’t happy with his contract and threatened a holdout the night before the game.

The Packers were able to reach a deal with Sharpe, but not before Brett Favre said some things that criticized the timing of Sharpe’s holdout and potentially caused turmoil in the Packers locker room.

Sharpe sat out Saturday’s practice but negotiations between his agent and management bore fruit late Saturday night and the All-Pro receiver was back on the field for the game on Sunday. 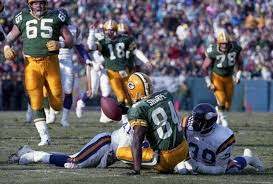 Favre and Sharpe were able to clear the air before the game started. “We talked briefly,” Favre said. “I told him there were going to be things that he saw in the papers that I said. I told him I don’t understand his situation. He said a lot of people don’t understand his situation. He said there are no grudges. He deserves to get what he wants, as most great players do. He’s happy, so we’re happy.”

Once the game started, all seemed well between quarterback and star receiver. All Sharpe did in the game was catch seven passes and scored the Packers only touchdown on a 14-yard pass from Favre in Green Bay’s 16-10 victory. He also gained eight yards on a reverse.

“He played his butt off,” Favre said after the game. “I have no grudges against him because I threw the ball to him.”

Favre finished 22-of-36 for 185 yards and the touchdown. He did not throw an interception. Edgar Bennett gained 90 total yards from scrimmage and led the Packers with 51 yards on the ground.

The Packers spoiled future Hall of Famer Warren Moon’s Vikings debut, limiting him to 166 passing yards and intercepting him three times including a pair by safety George Teague.

The Packers sacked Moon three times with Sean Jones, Bryce Paup and Reggie White each bringing Moon down behind the line of scrimmage.

The Packers defense also stuffed the Vikings running game, holding Minnesota to 48 yards on the ground in 17 carries and just 194 total yards on offense for the game.

Minnesota’s only touchdown came when defensive end James Harris recovered a Favre fumble and returned it 13 yards for a touchdown early in the fourth quarter. That pulled Minnesota to within 13-10.

The Packers were pleased with the victory but head coach Mike Holmgren seemed frustrated by Sharpe’s last minute holdout.

“Say what you want; those types of things are distractions,” Holmgren said after the game. “You try to battle through or ignore or deal with it the best way you can. We’re all human. I applaud the players. They played hard. They didn’t let it bother them too much. I was probably the one it bothered.”

For Holmgren, it was a small measure of revenge after the Vikings spoiled his NFL head coaching debut on opening day just two years earlier with a 23-20 overtime victory.

The Packers and Vikings ended up splitting the 1994 season series with Minnesota winning the rematch at the Metrodome 13-10 in overtime. The Vikings won the division with a 10-6 record while the Packers finished the season 9-7-0 and made the playoffs for the second straight season under Holmgren.

Nobody knew it at the time, but this would be the final season of Sharpe’s NFL career. Sharpe finished the season with 94 catches for 1,119 yards and a league-leading 18 touchdowns. But Sharpe was diagnosed with a neck injury after the season finale against the Bucs and he was forced to retire.

For the Packers at the time, it was a key division win to open the season, something the Packers hope to do again on Sunday when they take on the Vikings again in their season opener.