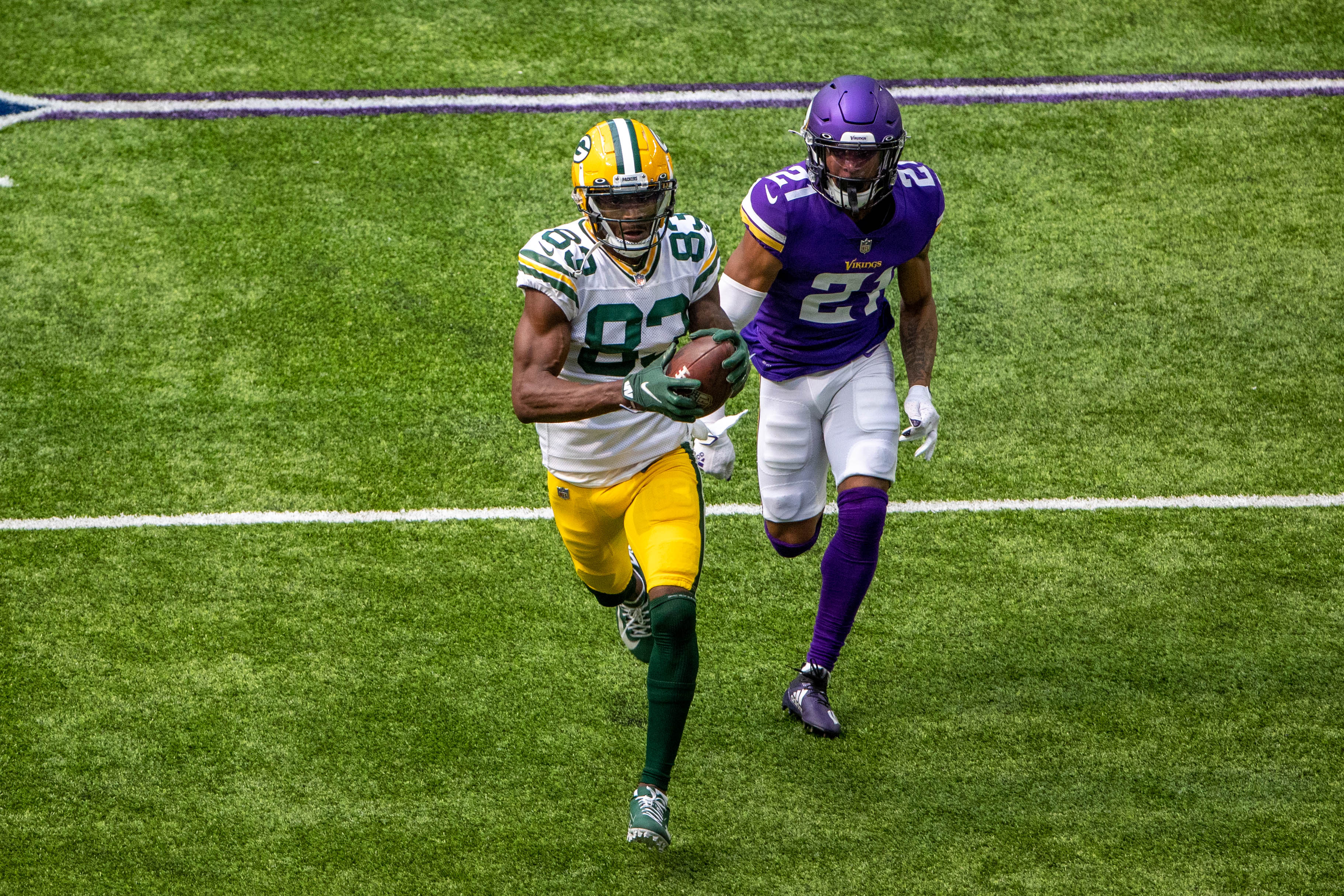 The Green Bay Packers offense was prolific in Week 1 against the Minnesota Vikings, scoring 43 points and gaining 522 yards while keeping the ball for 41:16 against just 18:44 for the Vikings. While Davante Adams had a monster day for the Packers, Marquez Valdes-Scantling also made some big plays and showed some of his potential in the win against Minnesota.

MVS finished with four catches for 96 yards and a touchdown to help the Packers attack run smoothly. He could have done even more as he dropped two catchable balls that could have added to the Packers totals.

The key for the Packers offense is that MVS showed he can make plays and that he and Allen Lazard were good enough to keep the Minnesota defense honest while Adams was dominating on the other side of the field.

One of the biggest plays Valdes-Scantling made was a 45-yard touchdown catch deep down the right side of the field for a touchdown with just 21 seconds left in the first half. That gave the Packers a 22-7 lead just two plays after Jaire Alexander’s big interception just two plays earlier. These plays changed the momentum of the game just before halftime.

Even after MVS dropped two passes midway through the third quarter, Rodgers didn’t lose confidence in his receiver. He went back to MVS on a third-and-five from the Minnesota 41 and gained 39 yards on another deep pass down the right side that set up a one-yard touchdown toss to Adams. That gave the Packers a commanding 29-10 advantage.

Adams was impressed with the way MVS bounced back after dropping those passes. “I told him I forgot that you even dropped that. What are you talking about? That’s the mentality we have to have,” Adams told reporters after the game. “It’s tough when you put one on the ground, especially when you know there’s an opportunity for points so it’s really, tough to drop that so for him to come back the way he did. He caught that ball on the right side, a great release, everything about it was perfect so that shows me more than anything. I’m really proud of him…I know how hard it is to bounce back from something like that. A lot of things are in your head and it’s tough to flush it so my hats off to him for the way that he responded to that.”

The ability to bounce back after a mistake and to keep making plays is vital for an NFL wide receiver and MVS showed he was more than capable. His quarterback has also noticed a difference in Valdes-Scantling this season.

“I noticed this training camp was he was catching the ball better. I know that might sound like a strange statement for a receiver, but I think he was trusting his hands more,” Rodgers said. “He made a couple of catches with very strong hands the last week of training camp that gave me a pretty good feeling about how he was going to perform this week.”

Rogers clearly sees more maturity in Valdes-Scantling’s game this season. “To be honest with you, it was never about, I got to go back to him after the drop, and that’s a tribute to him,” Rodgers added. “I never thought twice about throwing him the ball down the seam or throwing him the go-route at the end of the first half and that’s a tribute to the way he performed in training camp. Now he’s got to prove it every single week and we’ve talked a lot about consistency is the most important thing he needs to show but I’m just really proud of him. He had the right mindset today and we talked about how important visualizing those plays is and it manifests in the things we want in life. I’m proud of his approach and I’m proud of the way he played today.”

Consistency is going to be a key for Valdes-Scantling, Lazard and all the Packers receivers behind Adams. MVS showed in Week 1 that he can be a big-play receiver and that he can bounce back from adversity after dropping a pass he should have had. His confidence wasn’t shaken and that is a big difference from how he looked late last season after struggling to play through an injury that robbed him of some of his speed.

His teammates and the coaching staff are more confident in MVS and they know if he can consistently play up to his talent level, the offense will have another dangerous weapon for Rodgers to throw to this season.

“I love Marquez, he’s such a good-hearted kid,” Rodgers said. “I think he really adds a lot to our locker room and he wants it so badly.”

The Packers want him to succeed badly, too. Now, Valdes-Scantling needs to prove he can do it consistently, week in and week out. Then, the sky is the limit.