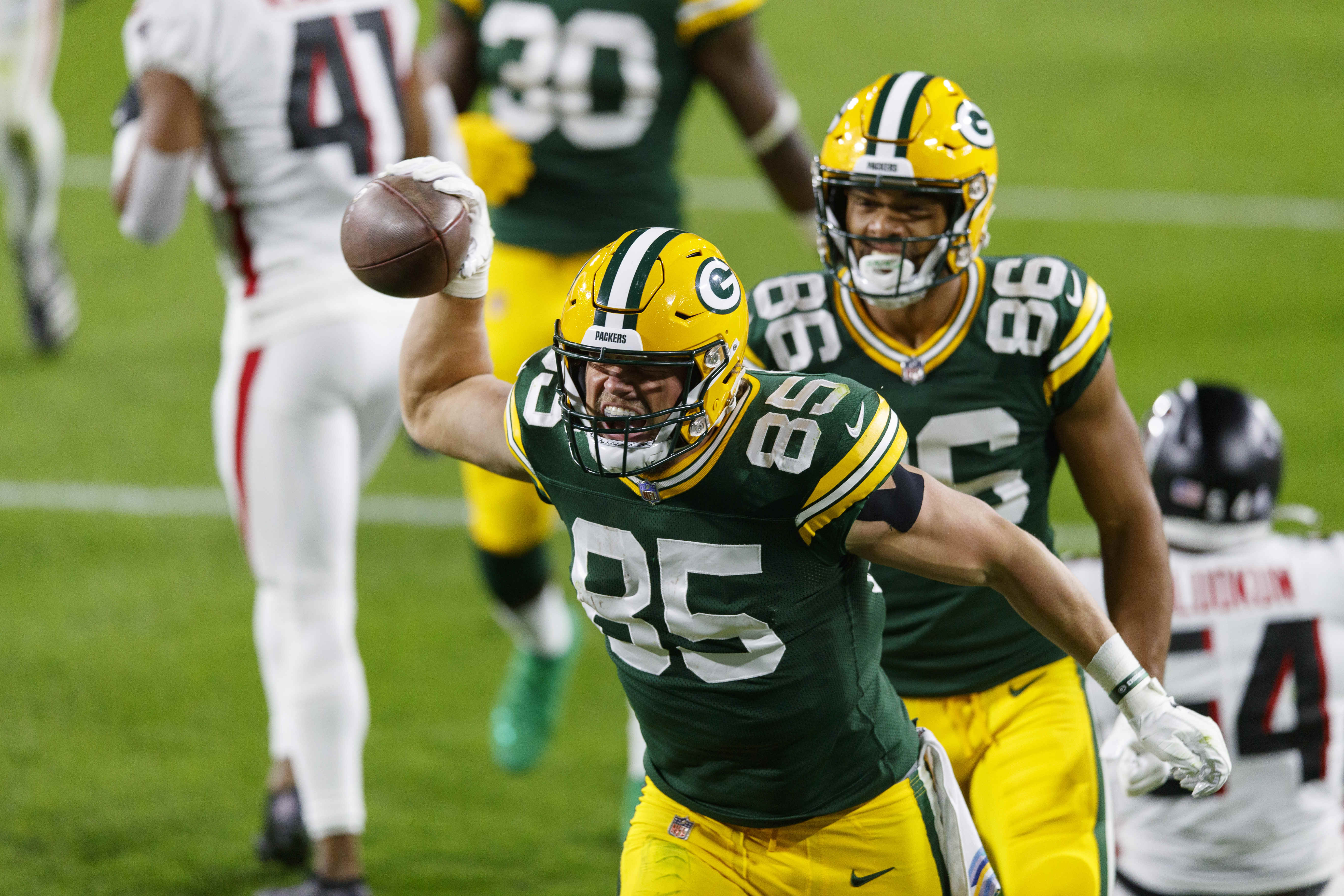 The Green Bay Packers head into their bye week with a 4-0 record after defeating the Atlanta Falcons 30-16 at Lambeau Field Monday night.

Za’Darius Smith had three sacks to pace the Packers defense.

Here are 10 things we learned from the Packers win over the Falcons:

1. Aaron Rodgers Remains at the Top of His Game

No Davante Adams? No Allen Lazard? No problem. Rodgers still put in a masterful performance, completing nearly 82 percent of his passes (27-of-33) for 327 yards and four touchdowns. His quarterback rating was a “mere” 147.5.

Despite missing three of his top four wide receivers (Adams, Lazard and EQ), Rodgers spread the ball around to seven different targets and looked like a virtuoso out there playing against a weak Falcons secondary.

You got the feelings that if Rodgers needed to score more points, he easily could have and that this was just another calm day at the office for a quarterback who seems to have rediscovered how fun playing football can be this season.

Through four games, Rodgers has thrown for 1,214 yards and 13 touchdowns while not committing even one turnover. That puts him on pace for 4,856 yards and 52 touchdown passes with no interceptions.

2. Robert Tonyan Established Himself as TE1

“Big Bob” Tonyan had a career night with six catches for 98 yards and three touchdowns. The six catches came on six targets.

Tonyan ran precise routes and got wide open on a few occasions, making it look easy.

There is no doubt Rodgers trusts Tonyan and that the former Indiana State star is continuing to show the coaching staff what he’s capable of doing.

3. Another Player Steps Up Every Week for the Offense

Through four games, a different Packers player has stepped up and had a huge game to help propel the offense to a big performance. In Week 1, it was Tae Adams who had 14 catches. In Week 2, Aaron Jones was dominant at both running the ball and catching passes. In Week 3, Lazard stepped up and had a career game and now in Week 4, Tonyan was the star.

The constant in all four games, of course, is Rodgers, who hasn’t had a QB rating below 107.6 in any of the season’s first four contests.

For the first time all season, the Packers started the same offensive line in back-to-back contests. Regardless of who has been in the lineup, the Green Bay offensive line has gotten the job done.

Rodgers was sacked only once and has been sacked only three times in four games. If Rodgers has time to throw, the results largely speak for themselves.

The running game was steady enough to keep the Falcons defense honest and starter Aaron Jones averaged 4.7-yards per carry and came up with some nice runs over the course of the game.

Players like Corey Linsley, David Bakhtiari, Elgton Jenkins, Billy Turner and Lucas Patrick deserve praise for their quiet consistency. When the backups come into the game, they get the job done as well.

5. The Defense Still Needs to Improve Its Tackling

The inconsistency of the Packers defense can be frustrating at times. Once again, poor tackling made things tougher for the defense.

Todd Gurley’s touchdown run was difficult to watch as at least three Packers had a good chance to bring him down but nobody did. That was the most obvious play, but there were several more.

The defense needs take better angles to the ball carrier and needs to wrap him up quicker and more consistently if the Pack hopes to beat quality opponents regularly.

Za’Darius Smith had a strong game and got after the quarterback. Smith recorded eight total tackles including three sacks, four tackles for loss and five quarterback hits. Overall, not a bad day at the office for “Z”.

Smith was persistent and never stopped hustling. He took a questionable roughing the passer penalty and one point it the game but didn’t let it slow him down.

Smith was by far the most dominant player on the Green Bay defense and the team will need more similar performances from him in the coming weeks.

7. The Defense Held When It Mattered Most

The turning point of this game may well have been the Falcons 20-play, 94-yard drive that started at their own one-yard line and ended at the Packers five.

Atlanta marched down the field after stopping the Packers on fourth and goal with 3:14 left in the first quarter and held the ball for 10:36 seconds.

Had Atlanta tied the game there, the momentum swing would have been substantial, but the Packers kept the lead and were never seriously threatened again.

The defense wasn’t great on that drive but came up big when it mattered most and it made a big difference in the tone of the game.

8. Injuries Are Mounting in the Secondary

The Packers secondary is getting banged up a bit. Kevin King left the game early with an injured quad muscle but probably could have played if the outcome were ever in serious doubt.

Chandon Sullivan left the game early due to a concussion which puts his status up in the air for the Bucs game in two weeks.

Will Redmond was also shaken up late in the game and we are still awaiting more details on his condition.

Ka’Dar Hollman came in late in the game and broke up two passes in the final minutes which was encouraging.

The Packers secondary needs the bye week to recuperate, regroup and get healthy before facing Tom Brady and the Bucs in two weeks.

9. Overlook Jamaal Williams at Your Own Peril

When the Packers drafted A.J. Dillon, many people were ready to write off Jamaal Williams, but he had a strong day as a receiver, leading the Packers with eight catches for 95 yards.

With the Pack down three wideouts, Rodgers often looked to Williams and Tonyan to keep the chains moving and they both came through.

Williams also remains the Packers best pass blocking running back and his spirit and enthusiasm are infectious in the Green Bay locker room.

He remains an important part of this offense and that’s a good thing.

10. The Offense Could Have Easily Put Up More Points

The way the Green Bay offense was playing, the only team who could stop the Packers seemed like the Packers for most of this game. Despite the key missing pieces, Matt LaFleur was able to put together an effective game plan.

The Pack left points on the scoreboard in the first quarter when they were stopped at the Falcons one-yard line on a fourth-and-goal with a 7-0 lead.

J.K. Scott only punted twice in this game and through four contests, he’s only punted seven times which puts him on pace for just 28 kicks all year.

The Packers offense moved the ball at will for much of this game and finished with “only” 403 total yards gained. Not bad for a team missing three of its top four wide receivers.

This offense can still be more efficient and better and that’s got to be a scary thought for the rest of the league.