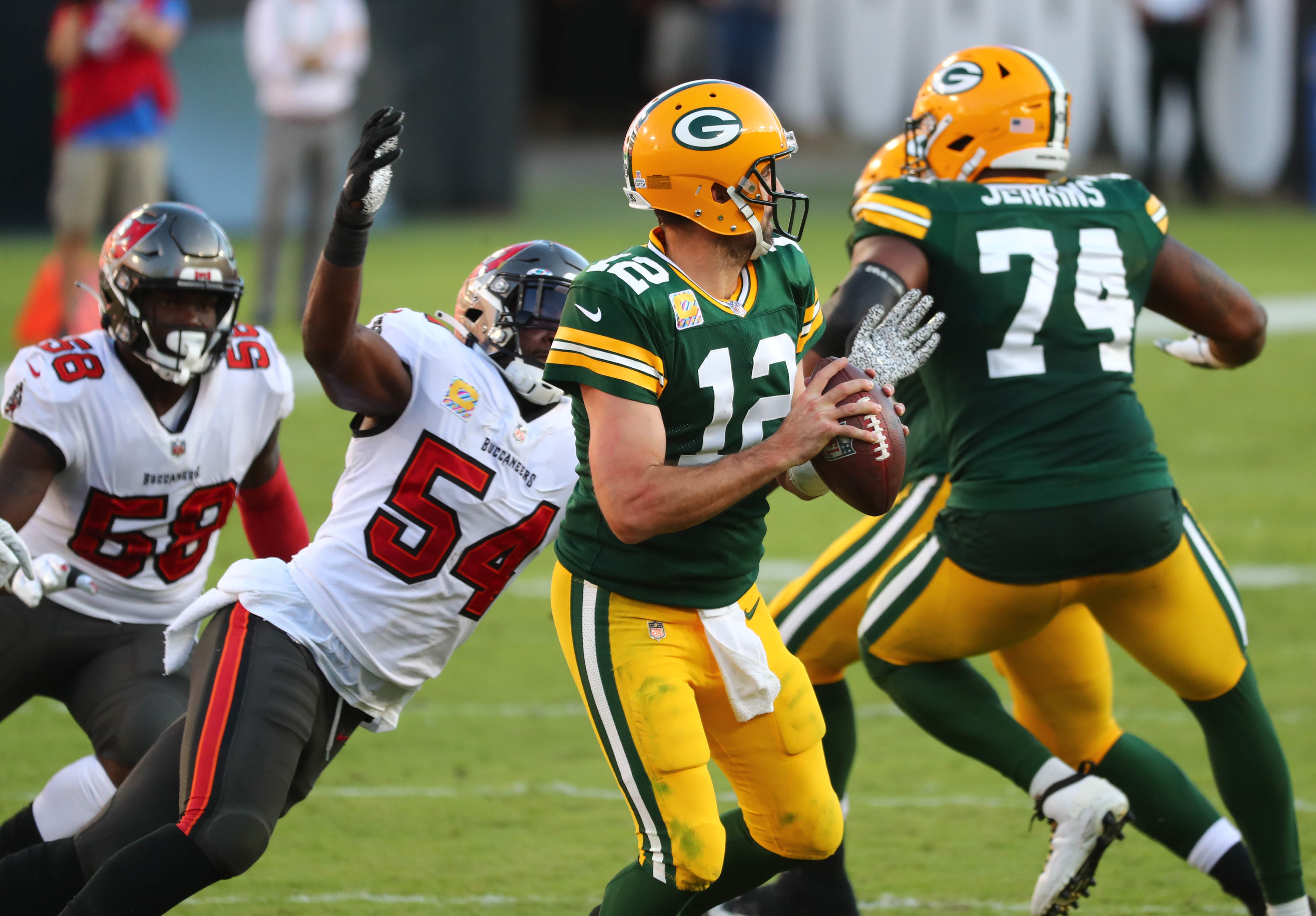 The Green Bay Packers lost for the first time in 2020, falling to the Tampa Bay Buccaneers 38-10 in Tampa. The loss dropped the Packers to 4-1 this season and are now in second place in the NFC North behind the 5-1 Chicago Bears.

Here are 10 things we learned from the Packers blowout loss to Tampa Bay:

1. The Bucs Defense Was Too Quick for the Packers Offense

After a productive first quarter, the Bucs defense was just too quick for the Green Bay offense. The Packers were unable to run wide and that negated the effectiveness of Aaron Jones who was held to 15 yards on 10 carries.

The speed and varied blitzes of the Tampa Bay pass rush also proved to be too much for the offensive line to handle as Aaron Rodgers was sacked four times and Tim Boyle once. Rodgers was really thrown off his game after getting off to a strong start in the first quarter.

The Green Bay offense moved the ball well in the first quarter using the occasional inside run by Jamaal Williams and A.J. Dillon and quick crossing patterns that picked up vital first downs.

Defensively, Tampa Bay ran only three plays in the first quarter and the Green Bay defense looked to be playing well.

Unfortunately, there were three more quarters of football to be played.

3. Rodgers Never Recovered from the Two Interceptions He Threw

The Packers had a 10-0 lead and the ball early in the second quarter when Rodgers threw his first interception of the season. Tampa Bay’s Jamel Dean picked off Rodgers by beating Davante Adams to the ball and then returned the pick 32 yards for a touchdown. That shifted the momentum of the game.

Then, Rodgers threw another interception on the following drive which Mike Edwards returned to the Green Bay two-yard line. One play later, the Packers lead was gone for good and Green Bay never recovered.

Before the interception, Rodgers was in rhythm and seemed confident even though it was apparent he was up against a tough defense.

After the two picks, Rodgers seemed to lose his confidence and the Green Bay offense had only four more first downs in the final 45 minutes of the football game.

It didn’t help that receivers like Marcedes Lewis and Equanimeous St. Brown dropped some catchable balls that may have kept some drives going.

Rodgers finished the game 16-of-35 for 160 yards, no touchdowns and the two interceptions. His quarterback rating was a terrible 35.4. His longest completion of the day was a 20-yard toss to Aaron Jones. Rodgers was never in synch after the first quarter.

It was good to get Davante Adams back in the lineup and Tae led the team with six catches for 61 yards. He had his moments, but not playing for three weeks did seem to affect Adams who wasn’t on his “A” game today.

On the first interception, Adams was beaten to the spot by the corner and he failed to properly box out the defender on the play.

It wasn’t that Adams played poorly, but he was a step below his best against the Bucs.

Clark was back in the lineup for the first time since Week 1, but he was barely noticeable. He was credited with two unassisted tackles and two assists but never really got any pressure on Brady and failed to come up with any big plays.

It will obviously take some time for these two star players to get back into form.

5. The Run Defense Couldn’t Get the Job Done

Ronald Jones scored two touchdowns on the ground while rushing for 113 yards on 23 carries.

Once the Packers fell behind, they needed to stop the run to have a chance to get back into the game. Unfortunately, they were unable to get that job done consistently.

6. The Pass Rush Was Non-Existent

One of the big keys of the game was to get pressure on Tom Brady and take him off his game. This never happened. Not only didn’t the Packers sack Brady, but there was rarely any pressure on the slow-footed veteran to make him hurry his throws.

Brady wasn’t spectacular, but he didn’t have to be. He was extremely efficient and was able to beat the Green Bay defense with short passes that kept the chains moving and complimented the Tampa Bay running game.

On the few times that Brady was pressured, penalties hurt the Packers like Rashan Gary’s poke to Brady’s face that just added insult to injury and helped Tampa Bay keep drives alive.

Za’Darius Smith was credited with one quarterback hit and so was Preston Smith, but there was no consistent pressure on Brady throughout this game and it made a big difference. Even at 43, Brady is capable to moving the football when he has time to throw.

Backup cornerback Josh Jackson was pressed into the starting lineup when Kevin King couldn’t play. Jackson had a few moments but was beaten badly a few times and committed a blatant pass interference play that gave Tampa Bay the ball at the Green Bay two and helped the Bucs cement their lead.

Jackson was second on the team with six tackles, but the drop off in play between a healthy King and Jackson was obvious.

This was a big opportunity for Jackson and he failed to show he could be a consistent part of this defense.

All Pro left tackle David Bakhtiari was injured in the second half and did not return to the game. It was described as a chest injury. Rick Wagner stepped in at left tackle but the difference was very noticeable.

It would be a big blow to the Green Bay offense if they lose Bakhtiari for any length of time. He is one of the best pass-blocking tackles in the game and a big reason why Rodgers can do what he does so well in most games.

Check for updates on Bakhtiari’s status this week.

There weren’t too many bright spots defensively in this game, but Krys Barnes was certainly one of them.

The undrafted rookie from UCLA made a team-high 10 tackles including seven solo. In addition, he showed excellent form when making tackles and was in the thick of the action on many plays.

Barnes has been one of the team’s biggest surprises on defense this season and appears to have a bright future.

Montravius Adams also flashed some ability making four tackles including one tackle for loss that momentarily gave the Packers a boost.

10. The Packers Will Have to Regroup

This is the second straight year the Packers have laid an egg after their bye week under Matt LaFleur. They were beaten soundly in all facets of the game and the Bucs dominated the line of scrimmage on both sides of the ball.

Even the best teams in the NFL have the occasional clunker, but the big question is how do they respond? The Packers will have to regroup and bounce back after this poor performance and show that the first four games were no fluke but this performance against Tampa Bay was.