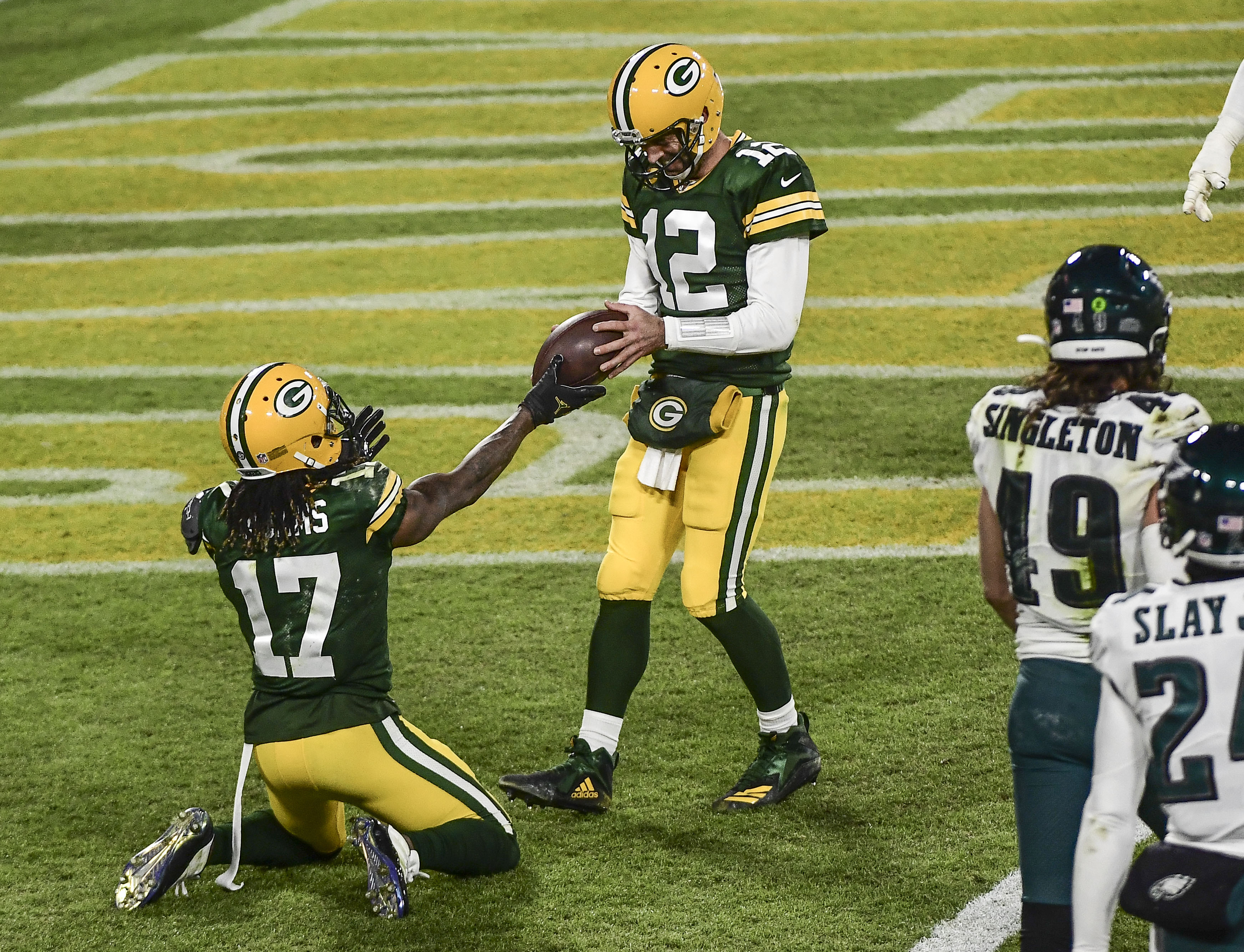 The Green Bay Packers improved their record to 9-3-0 with a 30-16 victory over the Philadelphia Eagles at Lambeau Field.

Aaron Rodgers threw for 295 yards and three touchdowns to lead the Packers offense while Davante Adams caught 10 passes for 121 yards and two scores. Running back Aaron Jones ran for 130 yards including a 77-yard dash in the fourth quarter that put the game out of reach.

The Packers now have a three game lead in the NFC North with four games remaining on the schedule.

Here are 10 things we learned from the Packers 30-16 win over the Eagles:

The Packers looked sluggish on both sides of the ball in the first quarter. They allowed the struggling Philadelphia offense to orchestrate a 15-play, 46-yard drive to start the game that took 7:07 off the clock. Fortunately, the defense was able to hold the Eagles to a field goal.

The Green Bay offense went three-and-out in its only drive of the first quarter and time of possession in the opening 15 minutes was a very one-sided 11:37 for the Eagles to just 3:23 for the Packers.

In the second quarter, the Packers turned things around and took control of the game, but against a quality opponent, they cannot afford a slow start like the one they against the Eagles.

Rodgers continued his outstanding play, completing 25-of-34 for 295 yards and three touchdowns. His quarterback rating for the night was 128.9 as he continues to play like a legitimate league MVP.

The three touchdowns took Rodgers’ career total to 400 in the regular season and he became the fastest player to reach that milestone, accomplishing it in 193 career games, eight fewer than Drew Brees, the previous record holder.

Rodgers is in complete control of the Packers offense. He is confident, comfortable and maximizes the talent he has around him. Through 12 games, his quarterback rating has gone below 100 in a game just once and that was the loss in Tampa Bay.

Davante Adams had another monster game with 10 catches for 121 yards and two touchdowns. He now has 84 catches for the season for 1,029 yards despite missing two games due to injury earlier in the season. This is the second time in Adams’ career he has gone over 1,000 yards in a season.

The two touchdowns also give Tae seven straight games with at least one score, tying an NFL record held by Packers great Don Hutson. In fact, Adams has scored in eight of the 10 games he’s played in this season.

Adams deserves All-Pro recognition for his outstanding performance this season.

Whether it was Carson Wentz or rookie Jalen Hurts, the Packers pass rushers were in the Philadelphia backfield most of the night.

The Packers defense finished the night with seven sacks and 11 quarterback hits. The numbers would have been even higher if not for Hurts’ ability to scramble and elude oncoming rushers.

Kingsley Keke led the Pack with two sacks, followed closely by Rashan Gary and Za’Darius Smith who had 1.5 sacks each. Dean Lowry added one while Raven Greene and Preston Smith had a half sack apiece.

The pass rush limited the Philadelphia offense to just 161 yards net passing which makes it difficult to win many football games.

It’s been a strange season for veteran kicker Mason Crosby. He started camp on the Covid-19 reserve list and later on the Packers were bringing in kickers for tryouts every week because Crosby was dealing with nagging injuries that could have kept him out of the lineup at any time. As a result, he stopped kicking off for several games.

But Crosby has been perfect so far this year on field goal attempts, hitting on all 14 of his chances in 2020.

But the usually reliable veteran missed another PAT against Philadelphia, the fourth time this season he’s botched an extra point. That already doubles his misses from a season ago.

Once again, this game was not as close as the final score because the Packers let the Eagles climb back into the game in the fourth quarter after Green Bay had jumped out to a seemingly safe 23-3 lead.

The defense again played soft zone and allowed a rookie quarterback to complete a 32-yard touchdown pass on 4th-and-18 to make it 23-10.

After the offense stalled, a 77-yard punt return made it a one score game despite the Packers overall dominance in most facets of the game.

When the Packers go to a soft zone while trying to protect a lead, they have too many botched assignments and broken coverages. This confusion leads to big plays by the opposition and often allows them to get back into the football game.

This may work against teams with a 3-7-1 record, but it won’t work as well against playoff caliber opponents.

Just when it seemed the game was potentially slipping away from the Packers collective grasp, running back Aaron Jones bailed them out and clinched the win with a dramatic 77-yard touchdown dash that showcased his vision, speed and cutback ability.

By the way, offensive tackle David Bakhtiari was blocking way down the field, catching up to the zig zagging Jones at the Philadelphia 30 and leading him into the end zone.

Green Bay’s special teams continue to struggle. The most noticeable problem was another punt return for a touchdown, this time a 73-yard runback by Jalen Reagor that pulled the Eagles to within seven points.

Once again, J.K. Scott had an embarrassing attempt at a tackle on the play. This is the second time in the last four games the Pack has allowed a punt return for a touchdown.

Scott remains inconsistent on his punts and his net for the game was only 30.3.

The Packers also allowed a 46-yard kick return in this game which again, could have really been a factor against a better opponent.

Special teams coordinator Shawn Mennenga needs to work out the kinks in his punt and kick coverage in time for the playoffs.

Second-year safety Darnell Savage had another strong game. He made a great leaping interception of Hurts in the fourth quarter to give him three in the last two games.

The Maryland alum also had a quarterback hit and broke up a pass while making two tackles on the day.

The Packers need more strong play from Savage down the stretch to shore up the middle of their secondary.

Matt LaFleur remains aggressive and gutsy on fourth down calls. The Packers second-year head coach went for it on 4th-and-goal from the Eagles one with his team trailing 3-0 in the second quarter. A stop by the Eagles would have really given them a jolt of confidence that they could win this game, but the Packers scored on a Rodgers to Adams pass and the offense got on track after that.

This season, the Packers are 12-of-19 on fourth down conversions, good for 63.2 percent. More importantly, by going for it so often (and usually converting), LaFleur has shown how much confidence he has in his offense.