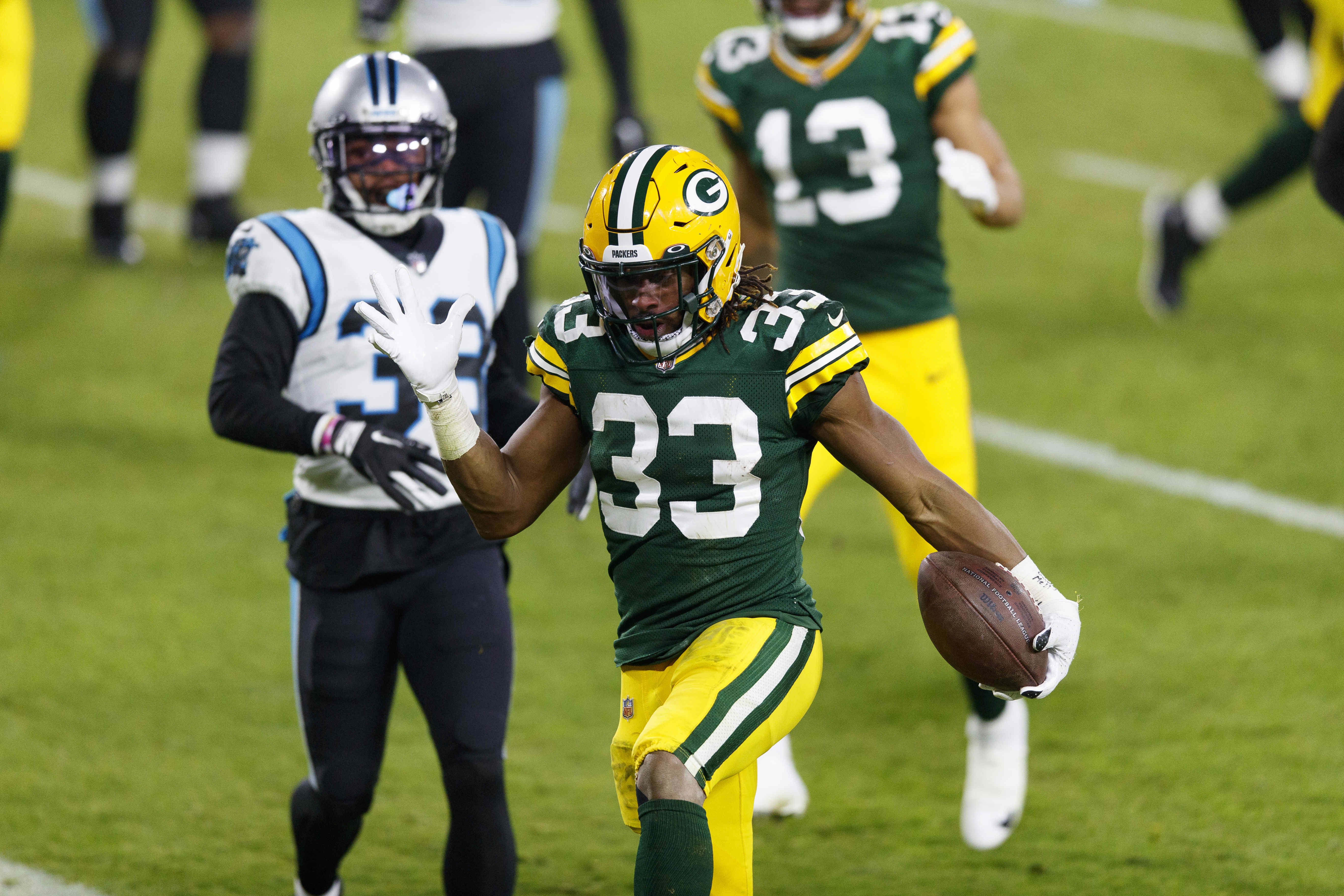 The Green Bay Packers did just enough to defeat the Carolina Panthers at Lambeau Field on Saturday, beating the visitors 24-16 to improve their record to 11-3-0. Aaron Jones ran for 145 yards and a touchdown while Aaron Rodgers threw his 40th touchdown of the season and ran for another.

The Packers remain in the driver’s seat for the top seed in the NFC playoffs and a first-round bye in the playoffs, but they will need to play better if they hope to make a playoff run.

Here are 10 things we learned from the Packers 24-16 win over the Panthers:

Rodgers threw a touchdown pass to tight end Robert Tonyan in the first quarter to give him 40 on the season. That is the third time Rodgers has thrown for 40-or-more touchdowns in a season and he is the first quarterback in NFL history to accomplish that feat.

Rodgers was not outstanding in this game, especially after the first quarter and a half. He finished with just 143 yards passing despite completing 20-of-29 passes. His quarterback rating was 91.6, only the second time he was below 100 in a game this season.

When one Aaron struggles, the other picks up the slack. Aaron Jones busted loose for a 46-yard run early in the game and finished with 145 yards on 20 carries and a touchdown. He also caught three passes for 13 more yards.

Jones was the most consistent part of the Green Bay offense in this game and without him, they would have struggled to score at all.

With this strong performance, Jones is now up to 968 yards rushing for the season and needs just 32 more yards in the Packers final two games to complete his second consecutive 1,000-yard campaign.

Krys Barnes made the big play that created the game’s only turnover and it proved to be the turning point of the game.

The Packers held a 14-3 lead early in the second quarter when the Panthers started a 12-play 65-yard drive that got them to the Packers one-yard line. Quarterback Teddy Bridgewater tried to jump over the top and score but Barnes met him before the goal line and punched the ball out of his grasp.

Kevin King scooped up the fumble at the five and returned it 47-yards to the Carolina 47. The Packers completed the drive seven plays later when Jones scored on an eight-yard touchdown. Instead of a 14-10 game, the Packers led 21-3. This play was the turning point of the game.

The Packers offensive line struggled in this game, allowing five sacks, five quarterback hits and seven tackles for loss in this game. Rodgers had only been sacked 13 times in the previous 13 games entering this contest.

Rodgers was unable to throw the ball downfield in large part because he was consistently under pressure, especially in the final 2 ½ quarters of the game.

Lucas Patrick struggled the most in pass protection, but for the first time since the loss in Tampa Bay earlier this season, the offensive line looked out of synch and overwhelmed at times in this game.

The offensive play calling was very unimaginative, especially in the second half. Rodgers almost never threw the ball downfield and the Packers constantly threw short out passes at or near the line of scrimmage. The Carolina defense caught on to this strategy and was able to limit the effectiveness of this play throughout the second half.

The Packers longest completion of the day was 22 yards and Rodgers averaged just 4.9-yards per attempt and only 7.2-yards per completion in this game.

In the second half, the Packers gained a total of 49 yards although the four second-half sacks by Carolina reduced that number.

The variety of play calls and the ability to scheme players open was lacking in this game and there was also less motion before the snap.

This was also the first game the Packers scored fewer than 30 points in more than a month.

Davante Adams’ streak of touchdowns in eight straight games came to an end tonight. Adams struggled a bit, dropping two passes. The Panthers were able to make him a non-factor for most of the game except right near the line of scrimmage.

Adams finished the game with seven catches but he gained just 42 yards with a long of just 14. This was the first time Tae failed to score a touchdown in a game since the loss to Tampa Bay on October 18.

Safety Adrian Amos had another strong game for the Packers on defense. He was second on the team with seven total tackles including six solo. Amos was credited with one quarterback sack, one quarterback hit and broke up three passes to lead the team in that category.

Amos may not make a lot of glamorous plays, but his steady performances week in and week out are important for this defense. Tonight, Amos shined and played a strong all-around game.

Veteran kicker Mason Crosby came up big again for Green Bay in this game. The Packers led 21-13 and were driving down the field late in the fourth quarter. Rodgers was sacked on 3rd-and-6 from the Carolina 25 and lost eight yards.

Crosby was called on to make a 51-yard field goal to make this a two-score game and he did just that, fighting off the below-freezing temperatures to do it.

Crosby is now 16-of-16 on field goals this year despite fighting through injuries and being on the Covid-19 reserve list during training camp.

His play is easily the highlight of the Packers special teams this season and his consistency could be a big asset for this team in the playoffs, especially in cold or windy weather conditions.

Tight end Robert Tonyan continued his strong season, catching his 10th touchdown pass of the year in the first quarter. That makes him the first Green Bay tight end to reach double-digit TDs in a season since Keith Jackson back in 1996.

Tonyan now has 49 catches on the season for 551 yards and 10 touchdowns. The former Indiana State star has made himself into a good receiving tight end who may earn Pro Bowl honors this season.

Once again, the Packers took a sizeable lead but were unable to finish off a weaker opponent. The Packers led 21-3 in the second quarter, but the offense stalled after that and the Pack let the Panthers stick around and get back into the game.

Head coach Matt LaFleur likes to say, “All gas, no brake,” but this team needs to figure out how to apply that principle consistently or they will lose to quality opponents in the playoffs.