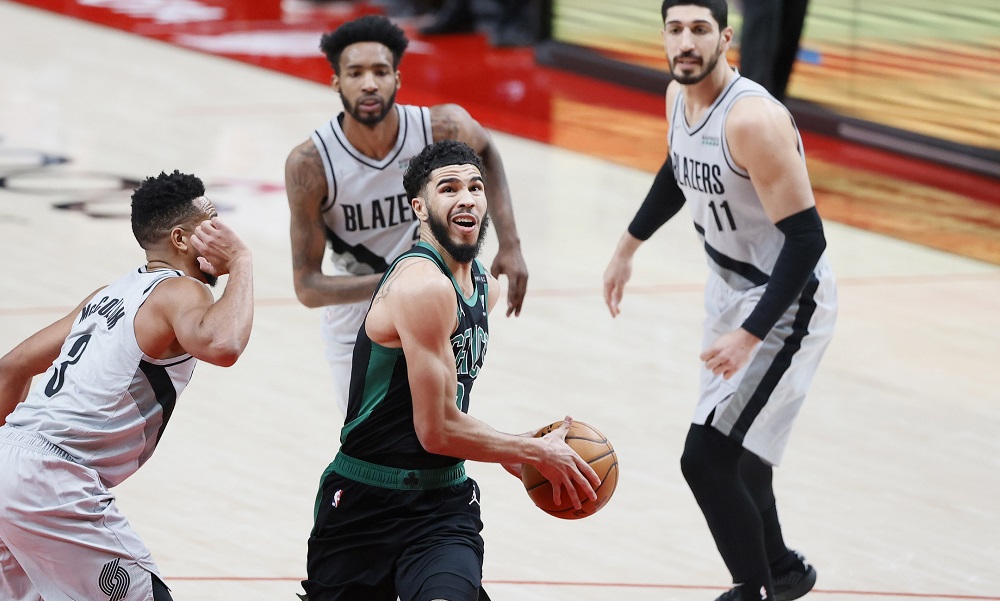 The Celtics won at Portland on Tuesday night, 116-115, and is there any doubt that they would’ve lost this game if it had been played a few weeks ago? After being the league’s worst fourth-quarter team for at least half the season, they’ve turned it around. The Cs have won six of their last seven, largely by out-executing their opponents in crunch time.

Boston had 30 assists, made 15 threes and got to the free throw line more than Portland – all that being usually the right recipe for success.

Last night at halftime, Tatum had just 7 points after attempting only 5 shots – not much involvement for the player with a 29.4 usage rate (19th in the league). He made up for that by scoring 17 in the third quarter on 6 of 8 shooting.

In the fourth, with a one-point lead that was in no way secure against the Blazers’ shooters, Tatum gave Boston just enough cushion to survive the final seconds, when Portland’s Norman Powell hit a desperation three to cut the margin back to one.

That shot was drilled, and it’s the type of clutch play the Celtics rely on from their best baller. Tatum has been in such a groove lately:

He's reached the 20-point mark in all 11 contests

Chuck featured Marcus Smart’s classic hustle sequence in this morning’s Dump, but it’s so good we must look at it again.

Smart was a defensive demon against Portland, especially his hounding of Damian Lillard. Chris Forsberg tweeted the results of the defense against Dame:

When defended by Marcus Smart, Lillard shot 1 of 5 for 3 points and committed 2 turnovers. When guarded by anybody else: 8 of 16 FGs, 25 points, 1 TO.

Meanwhile, Marcus was 4 of 9 (and 3 of 5 on threes) for 13 points, and he added 7 assists. Smart also made the right play to deny Portland a reasonable chance to win the game. Even Dame doesn’t have full-court range.

Brad Stevens told Marcus Smart to intentionally miss a free throw up 1 to win the game for the Boston Celtics – Quick Breakdown: pic.twitter.com/RWftM1AfwT

You might recall that Smart had tried an intentional miss at the end of the Dallas game two weeks ago. He failed to hit the rim that time. Last night was perfect; it’s a good bet he practiced.

Kemba Walker has had a perplexing season. We don’t know what to expect from him from one game to the next, or even one quarter to the next.

Whatever you thought of Enes Kanter as a Celtic, you have to admit he must be a good teammate. He may not play any defense, but in the bubble last year, he kept things loose by challenging Smart to fake wrestling matches and generally being a goofball. He and his bros miss each other.

Kanter finished with 9 points and 10 rebounds, way below his recent outing of 24 and 30, but his former teammates were entertained.

Enes Kanter is on a clear charm offensive with his former Celtics teammates. Everyone is smiling like it's a cocktail party.

With this one win, the Celtics moved from 7th in the East to 5th place, one game behind Atlanta. The Hawks hold the head-to-head tie-breaker. There are only 17 games remaining, so we’re into scoreboard watching and trying to avoid the play-in tournament (involving 7th through 10th place).

Nine games are at home, including a two-game visit from the Heat. Eight are on the road, including the last three of the season (Cavs, Wolves and Knicks).