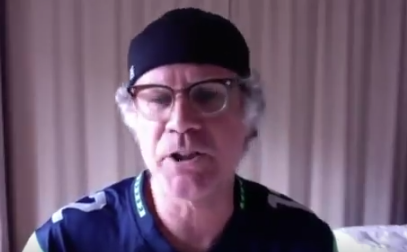 Comedian Will Ferrell is a part owner of Los Angeles FC, so given that his acting career has slowed down a bit, he’s been seen more and more often in the sports vertical.

Ferrell has some friends that are owners of other teams, and he apparently knows the Allen family well, which makes sense, given that they own the Sounders (another MLS team).

We know that because he managed to “sneak” his way into a recent virtual team meeting, as he just popped up onto their Zoom screen. He even shared an idea for a new play, called “Go flywheel, Kanye Starbust.”

We’d give that play a shot. Russell Wilson can make anything happen.