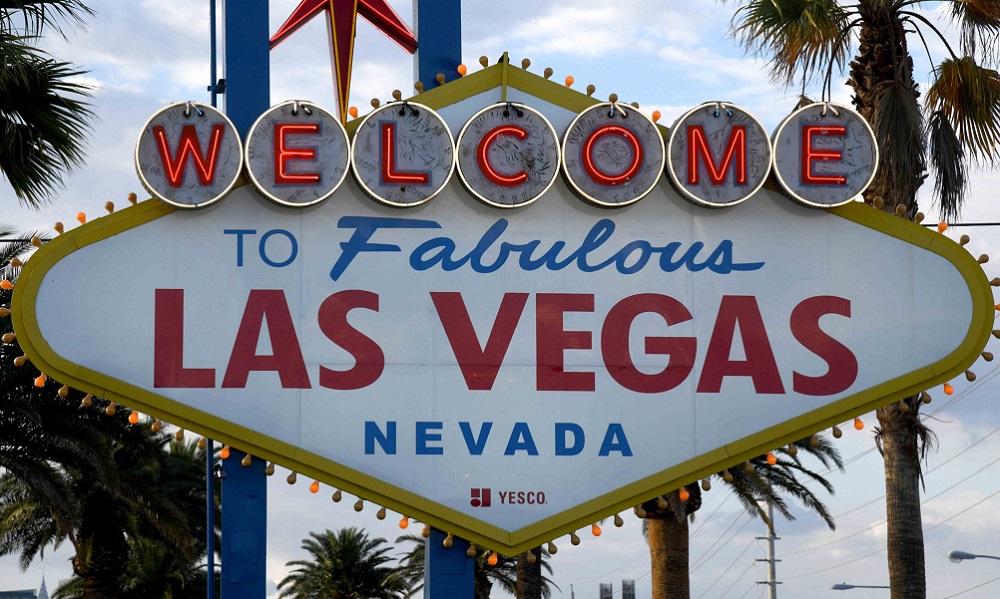 Friday was a wild night in the NBA, to say the least. Besides the shocking developments with Kawhi Leonard and Paul George, there was a surprise at the NBA Summer League in Las Vegas.

Not joking: Action at NBA Summer League Pelicans vs Knicks game in Las Vegas paused for the moment due to an earthquake.

Mark and Doris were legitimately fearful of what they had just experienced, especially with the huge scoreboard swaying slowly above them.

For precautionary reasons, the remainder of tonight’s @NBASummerLeague action at Thomas & Mack Center has been postponed.

The quake (first reported as magnitude 7.1, later adjusted to 6.9) was centered in California, a couple of hundred miles from Vegas.

These were the coordinates for that 7.1 earthquake, according to the USGS twitter account. It would have been absolutely devastating if it were in an urban area, and no doubt dangerous for the people there. pic.twitter.com/oaFoPkPujn

Anyway … assuming the arena’s structural integrity is found to be intact, there will be NBA and Celtics basketball to watch tonight.

11 Days. 83 Games. All 30 NBA Teams and the Chinese and Croatian National Teams. The MGM Resorts #NBASummer League 2019 schedule has been released!

The Celtics will play four games before the elimination rounds. Besides the channels shown below, all games will be carried on NBC Sports Boston.

And now listen to Tom Westerholm – have fun while you watch!

To be fair to my fellow members of the media, they are technically right. Summer League doesn’t actually mean anything. Trae Young looked like the worst player in the NBA at last year’s event, and he turned into one of the best young point guards in the league. Other players — who we won’t mention, in the spirit of positivity — have looked great in Summer League and brutally bad in the NBA. Just because your favorite prospect dropped 30 points on 8-for-11 shooting from three doesn’t mean he can get buckets when the NBA season rolls around.

But also, who cares? Objectivity is for people with my job — people who try to analyze the game without getting swept up in everything. Objectivity is for coaches and scouts and front-office types, who are paid to help a franchise win games and acquire high-level talent.

Fans aren’t paid anything. Fans are the consumers. For fans, sports are supposed to be fun, and Summer League is a whole lot of fun.

Can only imagine what the driver of this car would say if I told them they are behind the Celtics team bus… 😂 pic.twitter.com/20V5RIgf5e

And Grant Williams knows how he will enjoy himself.

"Wins. That's what we're here for. " – Grant Williams on what he's hoping to take away from summer league.

Herald: Here’s what the Celtics want to accomplish in the Vegas Summer League

On Page 2: Don’t let the door hit you, Kyrie

Oh, at first it will be everything you hoped. Irving is a truly extraordinary basketball player. You know this already, but watching it on a daily basis is a genuine treat, and it will be his show next season with Durant off rehabbing his torn Achilles.

He’ll soliloquize during postgame press conferences, and he’ll sound almost profound, right up until you read the transcript of what he actually said and realize he sounds like a freshman philosophy student who didn’t do the reading.

Then he’ll tell you that you and the young teammates couldn’t possibly understand where he’s coming from. He’ll sigh a lot.

I can’t tell you exactly when all of this will happen, just that it will. The honeymoon period in Boston lasted most of his first season. I suspect it will in Brooklyn too.

I understand, this may seem like sour grapes from a jilted fan base. That’s because it is. But it’s not just our experience. When the Celtics acquired him from Cleveland in August 2017, we ignored all the warnings about his moodiness and selfish play.

Here’s the saddest part of all. As great as he is, as fun as it will be at the beginning, when Irving’s ego veers Sean Marks’s best-laid plan off course, when it finally leaks out that he wants out, long after his detrimental, indifferent actions have already told you as much, you’ll be so annoyed with him by then that you won’t even care.

Wow, Chad Finn, don’t sugarcoat it – tell us how you really feel.

Just kidding. Chad is bluntly saying what most Celtics fans are feeling. When Kyrie came to Boston, we were shocked that the beloved Isaiah Thomas was traded, but at the same time were thrilled to get the man who had a championship-winning shot on his resume.

Then when Kyrie made his unsolicited announcement that he planned to sign long-term with the Celtics, we were over the moon.

Giving Kyrie the benefit of the doubt, perhaps he meant it when he said that, but he reneged big-time. The sneaker commercial with his dad was rendered BS. Kyrie’s over-confidence about the playoffs (he wasn’t worried “because I’m here”) was shattered by a hail of missed shots (he went 25 of 83 for 30.1% in the four losses to Milwaukee).

After that, we saw reports of how Kyrie had damaged the team’s chemistry over the course of the frustrating and ultimately lost season. The rumors that he planned to leave Boston became accepted as fact. And almost no one cared. Those of us who had believed in him and stood up for him realized we’d been duped. In the end we were glad to see him go.

Fun fact: In two years of tweeting about Kyrie, my phone’s predictive text refused to learn to spell K-Y-R-I-E. I had to hit every letter, every time. By contrast, it’s only been a week and my phone already knows the name K-E-M-B-A. It was a sign.

Danny Ainge has been taking a lot of heat about how the Celtics’ plans have collapsed in the past couple of weeks. Anthony Davis landed not in Boston, but LA. Kyrie walked. Al Horford stunned us by suddenly leaving, and worse, going to Philly. It hasn’t been pretty. But Kyrie’s personality was the wild card. Maybe if he wasn’t such a diva, everything would have gone as expected. Ainge was helpless to control that.

I’m going to try to ignore Kyrie from here on out. He’s forgotten about us; we should return the favor. But I will be curious to see where he is two years from now. There’s no guarantee it’s Brooklyn.

And, finally… Kanter also wins Round 2

Regular readers will recall that yesterday’s Dump had the story of how Enes Kanter roasted Nick Wright on Twitter for his terrible hair. Wright came back to defend himself on his show, then on Twitter.

But the rest didn’t go as Wright had hoped.

My first shot as a #Celtic ☘️ pic.twitter.com/iEwDoiVgGr