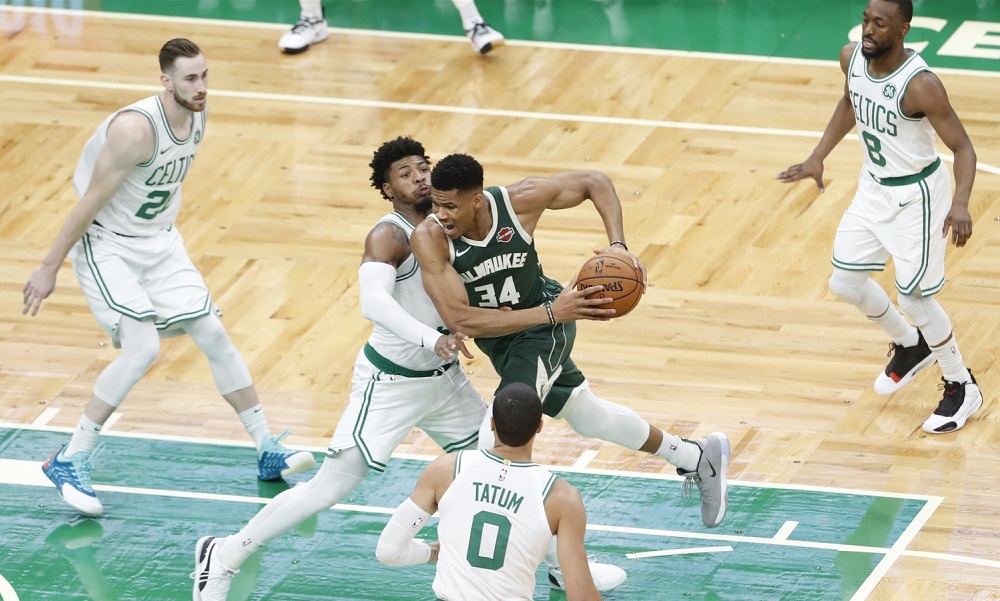 The Celtics were down by 19 to the Bucks in the first half, yet ended up winning by 11 – a 30-point turnaround. No, they should not have fallen behind by that much, but let’s leave that discussion for the talk radio brigade. We’re keeping it positive here.

We said in last night’s Rapid Recap that the TD Garden is a fun place again. If you need more proof:

I’ll go out on a limb and say the Celtics had fun tonight. pic.twitter.com/EyXNGHY8mX

Yes, the Bad Karma Man is long gone, and the Celtics are quickly putting their nightmare season behind them. Last night was the kind of comeback win we saw regularly during the Isaiah Thomas years, where the game seemed hopeless, but the team played harder than the opponent, didn’t quit, and the raucous home crowd carried them to the finish.

The mojo is back.

The Celtics haven’t had a captain since Rajon Rondo was traded – Brad Stevens wants “to empower everyone to add leadership within their own authentic way” – but if they did, Smart would be the only possible choice.

It’s hard to imagine Smart playing better than last night: 19 points, 5 of 11 from the arc, 6 assists, and sparking the third-quarter comeback by making his trademark “winning plays” all over the court. With Jaylen Brown out sick, he also guarded Giannis Antetokounmpo, preventing the Greek Freak from thinking he could take over the game as needed.

Smart is a master agitator. This play in the final moments, when Marcus lured Giannis into committing a foul, was like a sequel to the night Smart drew two charges on James Harden to help steal a win.

.@Scalabrine "What is that, Mike?"
.@celticsvoice "It's a tackle." 🤣 pic.twitter.com/qq8MOq5PEZ

Don’t take my word for it. Danny will tell you.

With the Hornets, Kemba Walker always seemed to put a hurt on the Celtics. Now we are seeing what he can do to other teams every night, and this view is much better.

Kemba posted a game-high 32 points, his second straight 30-plus outing. Although he made just 7 of 19, he drained 14 of 15 (!) free throws and added 6 assists and 6 rebounds. Best of all, his 13-point fourth quarter buried the Bucks for good.

When he gets his shot going, it looks like he’ll never miss again. We’re soooooo much better off with him in green than you-know-who.

With Enes Kanter still injured and Jaylen a late scratch due to illness, it was great news that Theis was back from his ankle sprain after missing just one game.

When he’s at the 5 spot, the man gives up size to everybody; that was especially true facing the Bucks’ massive Lopez brothers. Yet Theis played them virtually even: he had 11 points, 9 rebounds and a block, compared to the twins’ combined 13 points, 5 boards and 2 blocks.

His performance might’ve been under the radar, but no doubt Brad appreciated it.

It’s much too early to say, but the emergence of Utah Gordon is on the table. He had 21 points and 10 rebounds (his first 20/10 as a Celtic) and reached triple-double watch by adding 7 assists. Gordo made just 2 of 8 shots in the first half, but bounced back with a 7 of 9 second half. Ten of his points came in the pivotal third quarter, and then there was this in the fourth:

Watch the 4th on ESPN pic.twitter.com/BHgLUw9qi2

When he starts throwing these down instead of laying them up, we’ll know he’s all the way back.